Canada’s first diesel-electric Laker has begun its long delivery voyage from its builders in China to its new base of operations in eastern Canada along the St. Lawrence River. The unique vessel boasts several firsts for Canada and its owners Canada Steamship Lines. Due to transit the Panama Canal in early March, the vessel named Nukumi will take six weeks to reach its home in Canada.

The 25,800 dwt self-discharging bulk carrier was specifically designed to meet the needs of transporting salt from the Magdalen Islands with special consideration to improving its efficiency and environmental performance. Measuring 738 feet, the vessel was ordered in August 2019 from China’s Chengxi Shipyard in Jiangyin and will operate under a long-term charter to Windsor Salt.

According to Canada Steamship, the vessel was designed in cooperation with Windsor Salt to deliver deicing salt from the mines in the Magdalen Islands to stockpiles in Montreal, Quebec City, and other destinations within the provinces of Quebec and Newfoundland. Canada uses more than 4.5 million tons of salt each year to treat its roads. 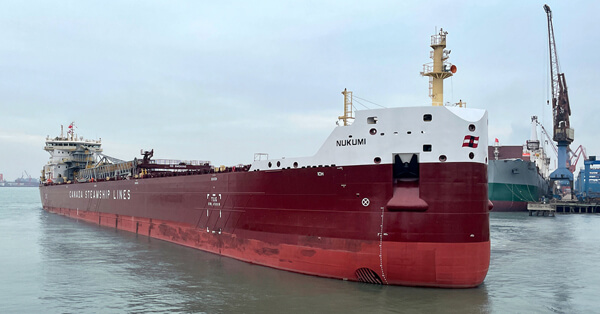 A fixed, single point of loading system, which is the first to operate in Canada, along with a single hopper into which the salt is loaded, will help to improve the efficiency of the vessel’s operations. It eliminates the need for the vessel to shift during loading.

Other elements of the design include a modern hull design and a state-of-the-art propulsion system to enhance the maneuverability of the vessel and increase the safety of navigation in the shallow Magdalen Island channel. The diesel-electric main engines are Tier III compliant and along with the improved efficiency of the hull will contribute to improved energy efficiency and reduced CO2 emissions while also reducing noise. The vessel also has a ballast water treatment system that is expected to reduce the transfer of invasive species.

Construction of the vessel began in August 2020 and she was launched in May 2021. Registered in the Bahamas, the Nukumi was handed over in mid-January and began the trip to Halifax, Canada on January 31.