Bowhead Whales and Narwhals Most Vulnerable to Arctic Shipping

Bowhead whales are the marine mammals most vulnerable to disruption from increased ship traffic in waters off Alaska, a new study has concluded. Across the Arctic, narwhals are the most vulnerable.

The study, undertaken by researchers at the University of Alaska Fairbanks and the University of Washington, looked at 80 sub-populations of seven marine mammals that live in the Arctic. It identified risks on or near major shipping routes in September, a month when Arctic seas have the most open water.

“We know from more temperate regions that vessels and whales don’t always mix well, and yet vessels are poised to expand into this sensitive region,” said lead author Donna Hauser, from University of Washington. “Even going right over the North Pole may be passable within a matter of decades. It raises questions of how to allow economic development while also protecting Arctic marine species.” 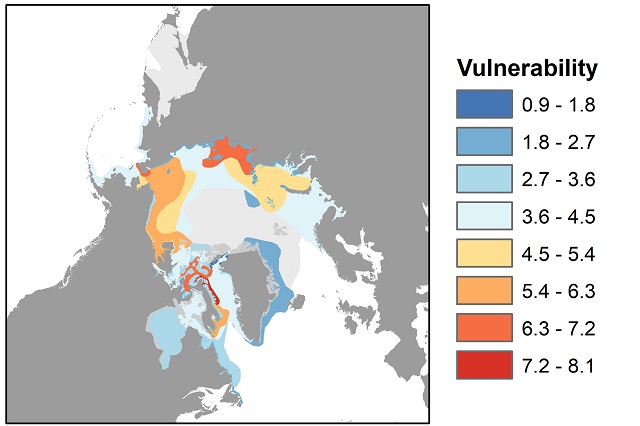 This map, modified from the manuscript, shows the September ranges of all Arctic marine mammal species. Red represents areas where mammal populations are highly vulnerable to ship traffic, while blue indicates areas of low vulnerability. Mammal ranges that don't overlap with sea routes are shown in light gray. Image courtesy of Donna Hauser

Hauser's research indicates that 42 sub-populations would be exposed to vessel traffic. In Alaska, bowhead whales are the most vulnerable, followed by populations of walruses and beluga whales. Given their size, speed and surface-oriented behavior, bowhead whales are considered more sensitive to vessel strikes than the other Arctic marine mammals studied. The subpopulation in the Bering, Chukchi and Beaufort seas is the most exposed to the sea routes and therefore is more vulnerable than other bowhead populations.

Walruses also are vulnerable because some populations are relatively small and live along shipping routes. Other studies also suggest they are sensitive to disturbance. Ringed and bearded seals, with generally large and widely distributed populations, are less vulnerable. Least vulnerable to vessel traffic were polar bears, which are largely on land in September and don’t rely on underwater sound for communication or navigation. Shipping in other seasons may have a greater impact on the species, and previous research suggests sea ice loss will affect polar bears in other ways.

The paper identified two narrow passageways where ships and animals are most likely to intersect. These are Lancaster Sound in the northern Canadian territory of Nunavut, and the Bering Strait, which separates the U.S. and Russia. These regions had a risk of conflicts two to three times higher than on other parts of the shipping route.

The Bering Strait is a necessary pathway for vessels using both the Northwest Passage and the Northern Sea Route. The strait is also critical to several populations of belugas, seals, bowheads and walruses migrating in and out of the Arctic.

“We could aim to develop some mitigation strategies in the Arctic that help ships avoid key habitats, adjust their timing taking into account the migration of animals, make efforts to minimize sound disturbance or in general help ships detect and deviate from animals,” said co-author Kristin Laidre, a polar scientist at the University of Washington. 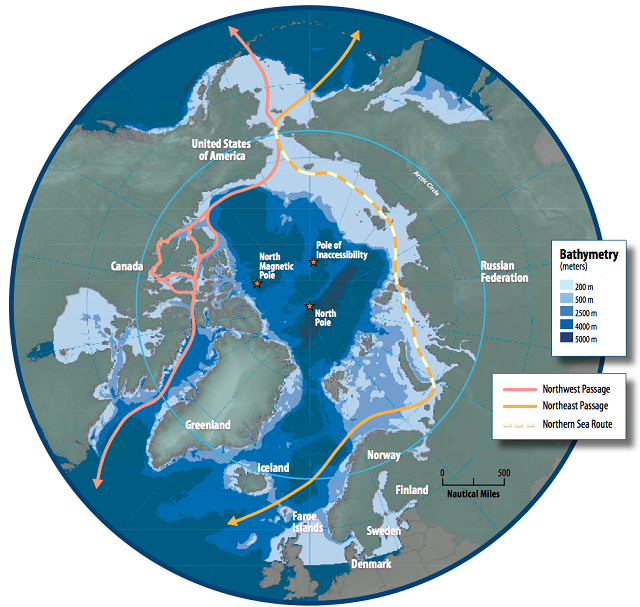 This map of the Arctic Ocean shows potential shipping routes. Such routes are blocked by floating ice in winter. However, the ice-covered area in late summer has decreased 14 percent per decade since 1979. The Arctic Ocean is projected to be ice-free in summer within decades. Image courtesy of National Oceanic and Atmospheric Administration.

The study was funded by NASA and the Collaborative Alaskan Arctic Studies Program.