A Seattle-based offshore wind developer, Trident Winds, is continuing to push the U.S. Department of Energy to move faster on the development of wind farms along the Pacific Coast. The company was an early advocate of wind farms off the California coast and has now submitted an Unsolicited Lease Request for what could become the first offshore wind power project along the Washington State coast north of the projects so far outlined by the U.S. Bureau of Ocean and Energy Management (BOEM).

“The Olympic Wind project is poised to be the first floating, commercial scale offshore wind installation off the coast of Washington State,” said Trident Winds CEO, Alla Weinstein announcing the application to BOEM. “The project will harness our unlimited, carbon-free offshore wind resources for the benefit of all Washingtonians. We believe strongly that all voices matter and look forward to working with stakeholders to form strong partnerships that maximize benefits for surrounding communities.”

The Olympic Wind project would be sited 43 miles off the coast of the Olympic Peninsula, nearest to the city of Westport, Washington, and the entrance to Grays Harbor. Depths in the area ranging between approximately 2,000 and 4,000 feet. According to the company, the project would take advantage of a vast offshore wind resource with the potential to deliver approximately 2GW. The application is for a commercial lease to pursue the permitting, development, construction, operation, and maintenance of the offshore wind farm. 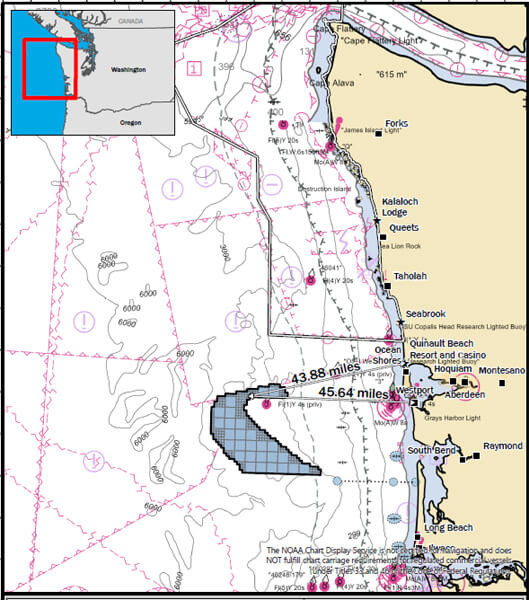 With the submission of the application for the Olympic Wind Project, BOEM is required to vet the proposal with an initial review to confirm the applicant meets the agency’s legal, technical, and financial qualifications to hold a lease on the Outer Continental Shelf for commercial offshore wind energy development. Following confirmation of qualifications, BOEM would then issue a public notice of a request for interest to determine if competitive interest exists for the proposed site.

BOEM would have the option of then commencing the formal process if interest exists in the site which would require several stages of environmental and site reviews before a formal proposal could be defined and an auction conducted for the lease areas. Alternately, BOEM could award a non-competitive lease which would permit the company to proceed with its site, construction, and operational plans. They estimated the wind farm could be operational in eight years.

The U.S. government has begun to explore the potential of offshore wind along the Pacific Coast highlighting it as the second priority area after the East Coast where projects have now been permitted and additional lease auctions are upcoming. Earl explorations have begun along with Oregon Coast while BOEM officials recently said they were targeting the fall of 2022 for the first lease auctions off the coast of California.

Trident Winds six years ago in 2016 was also one of the first advocates for offshore wind projects on California’s central coast. In January 2016, they recognized the potential of offshore wind off the coast of Morro Bay in California and urged the state and federal governments to take action. They proposed a 1GW offshore wind farm for that region. Morro Bay and a second location further north called Humboldt are BOEM’s first two sites in process for California’s offshore wind initiatives.