BAE Systems has been chosen as the prime contractor to design and build Australia’s new fleet of nine naval surface combatants.

The Future Frigate Program will replace Australia’s existing fleet of eight Anzac Class frigates which have been in service since 1996. The new frigates will be officially known as the Hunter Class, with the Royal Australian Navy to receive the advanced guided missile frigates beginning in the late 2020s.

The program is estimated to be worth more than A$35 billion ($26 billion) for acquisition. The ships will be based on anti-submarine frigates that BAE is currently building for the Royal Navy.

The frigates will be built in Adelaide, South Australia, at ASC Shipbuilding's Osbourne Naval Shipyard. The vessels will incorporate the Australian-developed CEA Phased-Array Radar and a suite of advanced anti-submarine sensors, allowing the ships to conduct a variety of missions.

ASC Shipbuilding, currently wholly owned by the Commonwealth of Australia, will become a subsidiary of BAE Systems during the build program. This ensures BAE Systems is fully responsible and accountable for the delivery of the frigates and ensures the work will be carried out by Australian workers and create Australian jobs.

At the end of the program the Commonwealth will resume complete ownership of ASC Shipbuilding, thereby ensuring the retention in Australia of intellectual property, a highly skilled workforce and the associated equipment. This is anticipated to ensure ASC Shipbuilding becomes a strategic national asset capable of independently designing, developing and leading the construction of complex, large naval warships.

BAE Systems had been shortlisted for the program by the Turnbull federal government along with Fincantieri and Navantia. 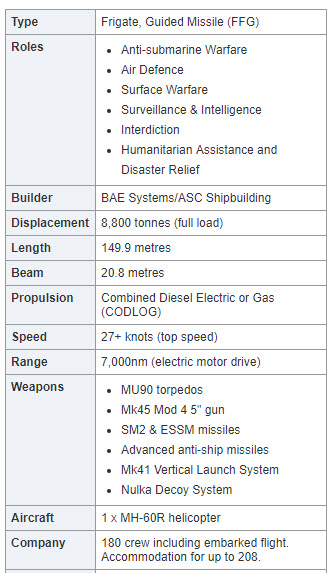