Another Former Carnival Cruise Ship Arrives at Breakers in Pakistan

After languishing for months off the coast of Sri Lanka, another of Carnival Cruise Line’s former cruise ships has arrived at the breakers. The former Carnival Fascination, the fourth member of the Fantasy class, arrived off Gaddani, Pakistan on February 9 for beaching.

Built by Kvaerner Masa-Yards at its Helsinki shipyard in Finland, the 70,000 gross ton Fascination was introduced in 1994 and sailed for the line from San Juan to the Caribbean. She differed only in decor from the prior ships of the class and was part of the cruise line’s effort to move to larger ships as the industry was growing. After many years in the Caribbean, she was repositioned later in her career replaced by larger and newer ships. Renamed Carnival Fascination in a fleet-wide branding program, she operated for a time from Jacksonville and was expected to move to Mobile before the pandemic caused the industry to pause operations.

Carnival had also selected her as one of the ships of the class to undergo more extensive renovations including the addition of balconies where possible to enhance the staterooms. However, when the corporation decided to accelerate the disposal of older vessels during the pause in operations, the Carnival Fascination was one of the vessels sold in September 2020. Unlike, three of her sister ships, which Carnival sold for recycling at scrapyards in Turkey, the Fascination instead found a buyer. 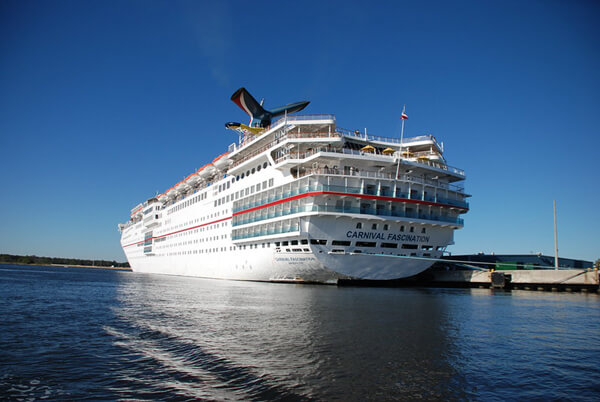 China’s Century Cruises which has operated river cruise ships on the Yangtze since 2000, said, “We felt restless and ready to go further east, to the ocean. As a result, Century Cruises acquired an ocean-going ship called Century Harmony!” The management reported that they had long wanted to expand into ocean cruising and were excited at the opportunities. The renamed ship sailed to China where they issued brief videos showing it undergoing refurbishment and being repainted.

Saying that they believed the Century Harmony was a harbinger of good things to come for the cruise industry, the new Chinese owners planned to launch ocean cruises in 2021. The Chinese cruise market however remained suspended as the pandemic continued and the country follows a strict zero-tolerance policy.

It was rumored that the owners considered using the ship as a hotel ship, but instead in October 2021 sold her to a trading company, Nina Services Corp. based in Singapore, and shortly after she departed arriving off Sri Lanka in November. Her name later appeared on her AIS signal shortened to Y Harmony, typically an indicator that the vessel was being offered for scrap. Reports indicated that she was likely to go to India but instead she lingered until departing this week for Pakistan.

Confirmation of her demise comes just a week after Carnival Cruise Line announced that it would also be retiring two more ships from the same class. The Fantasy class originally consisted of six sisters, three of which had already been scrapped. Carnival later extended the class in 1998 with the Elation and Paradise, which had updates to their mechanical designs including being fitted with Azipods. Both of these sisters have also been updated, and now they are becoming the last two remaining members of the pioneering class. Carnival said last week that the Carnival Sensation would not resume service and that the Carnival Ecstasy will retire in October 2022.

While older and smaller ships that did not produce the same financial results for the corporation, their lives were likely ended a few years prematurely by the pandemic and the resulting pause in cruise operations. Since the beginning of the pandemic, more than 20 large cruise ships, mostly all actively trading into 2020, have all been sold for recycling due to the impact on the cruise industry. In addition, there are a dozen additional large cruise ships laid up with their fate in limbo with most of them likely to also be sold for scrap.