An Unexplained Accident on the River Tees

A recent collision on the River Tees has turned into something rare in modern times - an inexplicable marine casualty with no suspects.

On April 18, 2019, the Turkish-flagged bulker Gülnak overshot her turn and struck the moored bulker Cape Mathilde, which was alongside the Redcar bulk terminal in Teesport, England. Both vessels were damaged, but there were no injuries and there was no pollution reported.

The UK's Marine Accident Investigation Board (MAIB) determined that Gülnak lost control of her heading towards the end of a turn to port in the main navigation channel. The turn to port could not be fully arrested, despite full starboard rudder and full speed ahead.

In the investigation that followed, MAIB examined the actions of the bridge team, the Gülnak’s maeneuvering characteristics, the state of her steering gear and any possible hydrodynamic effects. The inquiry was hampered by the absence of rudder angle and engine speed data, as this was not recorded on the vessel's VDR, but bridge audio provided evidence of the rudder and engine commands given. No direct cause of the accident was identified.

In the early hours of April 18, 2019, Gülnak was inboud, headed for Teesport's Tees Dock No 1. At 0320, the pilot ordered ‘port 10’ to turn the vessel from a heading of 210º to about 170º in order to keep to the center of the channel. Within a minute, Gülnak was turning to port at a rate of 23° per minute. The pilot ordered slow ahead and midships. At 0321, Gülnak’s heading was passing through 190° at about 28° per minute, which was quicker than the pilot expected. The pilot ordered ‘starboard 20' followed fast by ‘hard-a-starboard’ to check her swing.

At 0322:44, the rate of turn was still 21° and the engine was coming up to speed. By 0323:23, Gülnak had overshot the turn and her heading was passing 147°, still swinging to port at 10° per minute - putting her towards a bulk terminal and the moored bulker Cape Mathilde.

At this point, the pilot and master realized that Gülnak would strike the Cape Mathilde. The pilot ordered full astern. 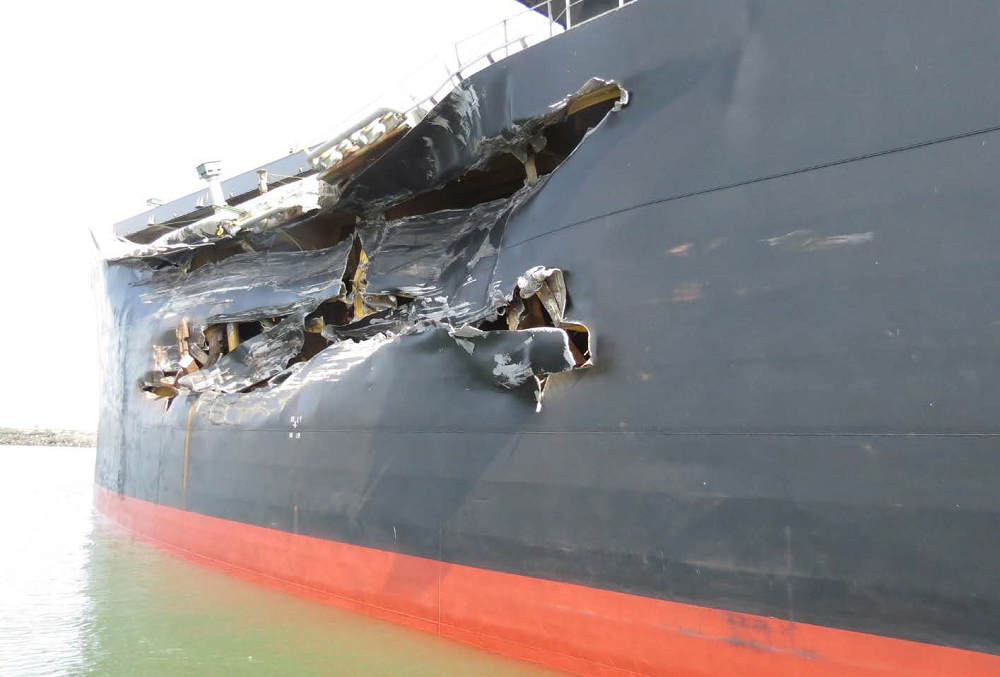 Damage to the hull of the Cape Mathilde (MAIB)

All factors in the case appeared to favor a normal, uneventful transit. The wind was light, the current was negligible, and thanks to the tide there was 25 feet of under keel clearance throughout. There were no problems steering the vessel before the turn that led to the casualty. Crew experience was not a likely factor: the master had 16 years at sea and the pilot had been in the industry since 1977, including 25 years as a pilot on the River Tees.

The VDR did not record helm position data, but bridge audio recordings showed that all helm and engine orders given by the pilot were repeated by the 3/O, who informed the pilot as soon as the action ordered had been completed. In the case of helm orders, this was within seven seconds.

"The factors contributing to the inability to fully arrest Gülnak’s turn are not readily apparent," MAIB concluded.

The one factor that the MAIB could not entirely rule out was the potential for shallow water effects, even though the vessel had 25 feet of UKC. "The possibility that Gülnak’s heading and directional stability were influenced to some degree by shallow water effects cannot be eliminated," the investigators noted.

Editor's note: MAIB has referred to this casualty as a collision, though one of the vessels involved was moored at the time of impact. We have followed that classification here.