The Spanish port city of Algeciras is calling for assistance with the growing number of migrant arrivals on its shores. The rate of migration from Morocco to Spain now outpaces that from Libya to Italy, which was long the primary route for refugees from sub-Saharan Africa.

Algeciras' mayor, José Ignacio Landaluce, reports that the migrant arrival rate on Spain's southern coast can now reach 1,000 individuals in a weekend. Early this year, the rate was in the range of a thousand per month. “I hope the EU is working on a global policy on this: it may be our problem initially, but tomorrow, or in a week’s time, or a month’s, it’ll be at the heart of Europe,” he warned.

The police union for the city of Cádiz reports that relief infrastructure is overburdened, with migrants sleeping in police stations, sporting arenas and reception centers. Spain's newly-elected Socialist government has promised to increase the resources available to handle the flow. “I know this is a problem and that the apparatus is being overwhelmed," said Magdalena Valerio, Spain's social services minister, in an interview Thursday. “We’re working on an emergency plan to reinforce the system and give more help to the NGOs working on arrivals."

Spain's new administration recently decided to accept the arrival of the rescue vessel Aquarius and some 630 rescued migrants on board, ending a standoff with Italy, which had refused the vessel permission to enter port. The decision gained wide-spread media attention, but authorities in Algeciras say that it was a minor event compared with what they manage daily. "The Aquarius is an appetizer compared to what is happening on the shores of the Strait," said Landaluce. "Here we act effectively without a large media focus." 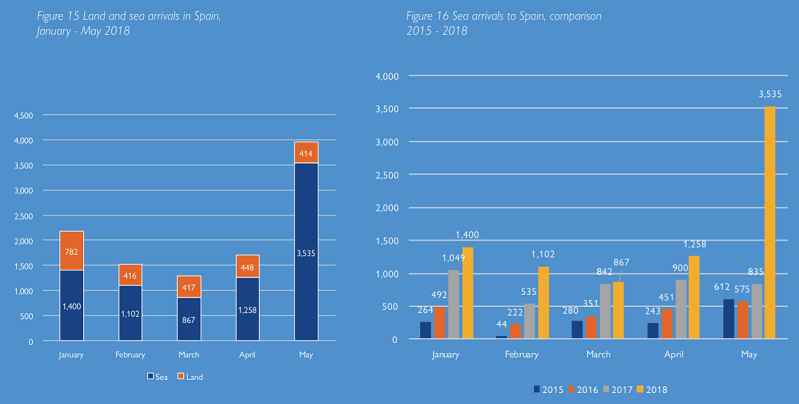 The International Organization for Migration reports that more than three quarters of the irregular migrants arriving in Spain are from sub-Saharan Africa, with the remainder from Morocco and Algeria. More than 85 percent are male. Most are rescued at sea and brought to shore in Andalucia, but thousands more attempt to gain entry via the only European land borders on the African continent - the fenced perimeters of Melilla and Ceuta, two Spanish outposts in Morocco.

On Thursday, 800 individuals rushed the fence at Ceuta in an attempt to enter Europe. According to the Spanish Guardia Civil, the migrants attacked the fence and assaulted officers with quicklime, sticks, rocks and other improvised weapons. 15 officers and 16 migrants were wounded, and about 600 individuals succeeded in entering the city. Most have been transferred to a processing center.