A Nation Remembers the Fallen on 9/11

9/11 is a day of mourning, a time to remember the 3,000 people who died in the multiple attacks on New York and the Pentagon. But it is also a day to celebrate the bravery of those who served our nation in the response that followed. Many continue to serve, and it is fitting that the San Antonio-class amphib USS New York – whose bow contains seven tons of steel from the World Trade Center – is off the coast of Florida today, bringing relief to areas hit by Hurricane Irma.

Aboard the carrier John C. Stennis, sailors told Navy Live that September 11 attacks inspired them to sign up and serve their nation. "What happened in New York City is something that for our entire generation of Americans is that defining moment. People directly involved with it will always have vivid memories of it," said Capt. Greg Huffman, the Stennis' CO. "Seeing that happen on the television, I literally just looked at my wife and said, 'I have to go to work.'"

In Washington, President Donald Trump presided over a moment of silence at the time that the first plane struck the World Trade Center. He gave a speech at a second ceremony at the Pentagon, where he reminded the audience that "when Americans are in need, Americans pull together – and we are one country. And when we face hardship, we emerge closer, stronger and more determined than before."

At the Naval War College (NWC), students and staff gathered for a ceremony at the campus' Patriots Memorial. NWC Comptroller Mark Murphy, a retired Navy captain who was working in the Pentagon on Sept. 11, spoke of his experiences that day and about the importance of remembrance. "We are here to honor the fallen. We are here to remember the 125 Pentagon workers, 59 passengers and crew of Flight 11; 40 passengers and crew of Flight 93 which crashed near Shanksville, Pennsylvania; and the more than 2,600 workers, firefighters, rescue workers and passengers and crew from the World Trade Center," he said. The victims at the Pentagon included 11 graduates and students from the Naval War College.

The day is particularly significant for the Coast Guard, whose local units organized a boatlift that rescued thousands of people from lower Manhattan in the aftermath of the attacks. Five cutters, 12 Coast Guard patrol boats and over 100 civilian vessels carried survivors from the water's edge near Wall Street. Chief Warrant Officer Herbert Fowlkes was among those present. “We saw it hit the second tower,” said Fowlkes. “It was heartbreaking because you see people who are helpless and can’t do anything to help themselves. I just had to keep it together and do my job.” 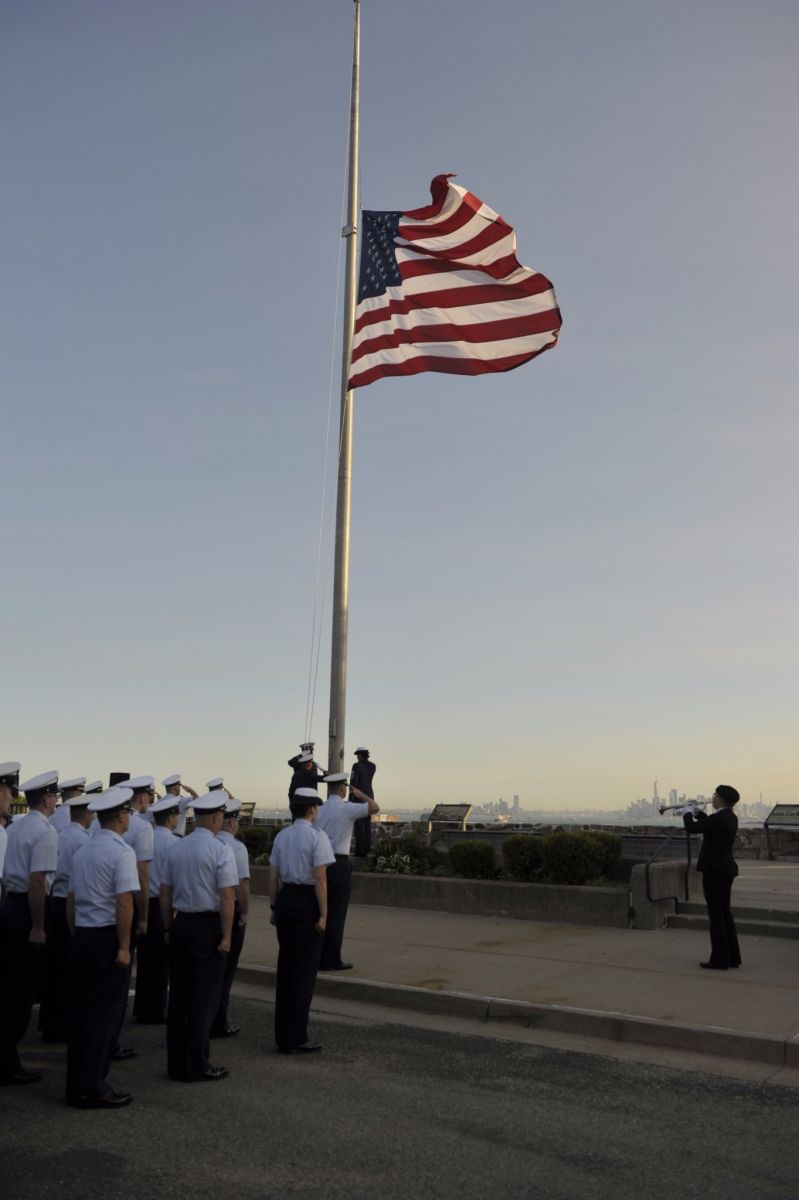 Coastguardsmen at a remembrance ceremony Monday morning, with the flag at half mast and Manhattan in the background

At the 9/11 Memorial & Museum in Lower Manhattan, a crowd gathered for a remembrance ceremony, including an NYPD funeral procession, a moment of silence, and a reading of the names of the fallen. But there is one group of victims whose names are not included – hundreds of first responders who perished from illnesses that may be related to the conditions at the attack site. On Monday, the town of Hempstead, Long Island said that it will fund a memorial for 582 police officers, firefighters and others who died after exposure to the ash and smoke at Ground Zero in Manhattan. The alleged link between the dust and smoke and the responders' later health problems has not been proven.