The author stumbles on a relic from the past.

I am an Instructor at the Pacific Maritime Institute in Seattle, Washington. Recently I was giving an AB class to a group of Workboat Academy students. We got to talking about if anyone had some odd bits of maritime “stuff” they might like to bring in for the class to play with. Boy, did I ever hit the jackpot!

One of the younger students showed up the next morning with a rather moldy-smelling wooden box about the size of one of the class workbooks. The box had seen better days, so my expectations were rather low. But what a surprise when I opened it to find a wonderful astrological instrument inside!

Come to find out, the student’s great uncle had been a lifeboat commander for the Navy during World War II. This old gent had kept this war relic hidden away down in his damp and musty basement for 60+ years. And now his grandnephew is following in the family’s maritime footsteps!

The instrument, called a Marean-Kielhorn Director, was common equipment during the war years. In fact, these directors were used well into the 1970s. And this kind of navigation tool was found not only in the maritime environment. 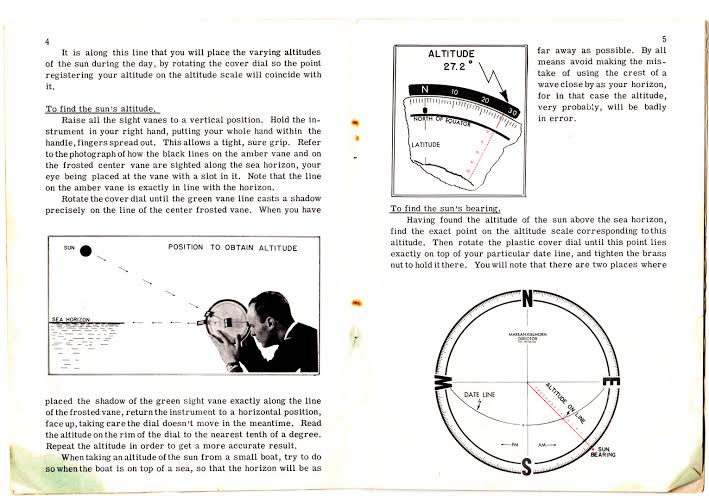 It seems the ocean is very similar to what you find traversing the sands of great deserts. You know, rolling hills of unknown areas that you must cross without a single landmark in sight. Does that sound like what we do? Ah yes, so did the tanks need to move across Northern Africa during the Second World War.

You might think of this Marean-Kielhorn Director as a very basic sextant. It is a bit different, but the analogy is close enough. You need to be able to actually see the sun to get a sighting, which is true with a sextant. Unlike the sextant, the Marean-Kielhorn Director has a whole pile of paper cards inside its plastic body for different latitudes. You need the correct paper card for the latitude you are in, or the entire thing does not work.

These paper cards are the heart of the device. They hold a curved graph that the movable part of the director intersects with as you sight the sun. Once you get the sun’s height, you then lay the director flat and gain the rest of the relevant information about where you are. Pretty slick, if you ask me.

How many interesting relics from the past that might exist out there I have no idea. Only time will tell. But let me tell you I am certainly going to keep asking classes if anyone has a “show and tell” to bring in. Who knows what might show up next time?! Anyway you look at it, it’s all fun and educational. And that is the primary reason schools exist.

Do YOU have something I can write about? If so, just send it to me, and I will send it back when the article is done. And next thing you know you will see a write-up in this wonderful newsletter of whatever it was. Come on – give me your best shot!

Dennis Murphy can be reached at [email protected].