One of the piles of gold coins, lying on the surface, outside the SS Central America shipwreck hull.

Odyssey Marine Exploration, a pioneer in the field of deep-ocean exploration, has now announced operational reports and inventories of items recovered from the SS Central America shipwreck.

These items were initially filed under seal in the United States District Court, Eastern District of Virginia, Norfolk Division. Chief U.S. District Judge Rebecca Beach Smith has allowed the reports to be unsealed and made available to the public.

Odyssey has been working since April 2014 under contract to Ira Owen Kane, the receiver for Recovery Limited Partnership (RLP). RLP is the court-appointed salvor-in-possession of the SS Central America shipwreck.

"This is an iconic American shipwreck, and, as salvor-in-possession, we have a duty to not only recover the remaining valuable cargo and significant items of cultural heritage at the site, but to also share what we learn with the public," said Kane. "We're proud of the recovery and scientific work being accomplished on the site. Making the reports, filed with the court, accessible is the first step in allowing the public access to the shipwreck and the heroic stories of her Captain and those who sailed on her final voyage. We continue to engage in a number of fascinating science initiatives, the results of which will be shared with the public and scientific community when complete." 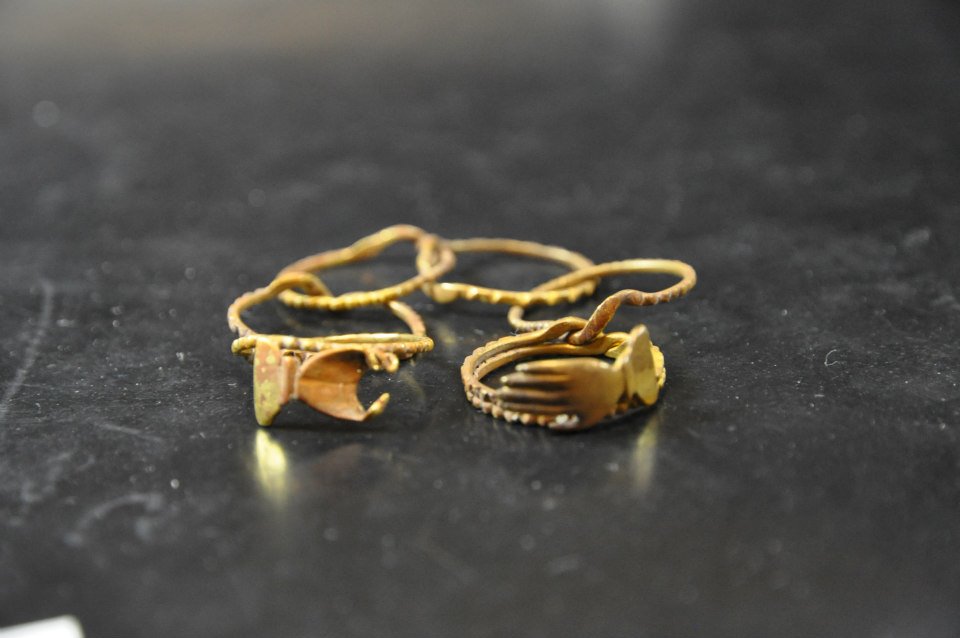 Above: One of the more interesting pieces of gold jewelry recovered from the deposits in the SS Central America debris field was a gold puzzle ring with a fede motif (clasping hands).

Below: Several gold bars with varying weights discovered at the stern of the SS Central America shipwreck. 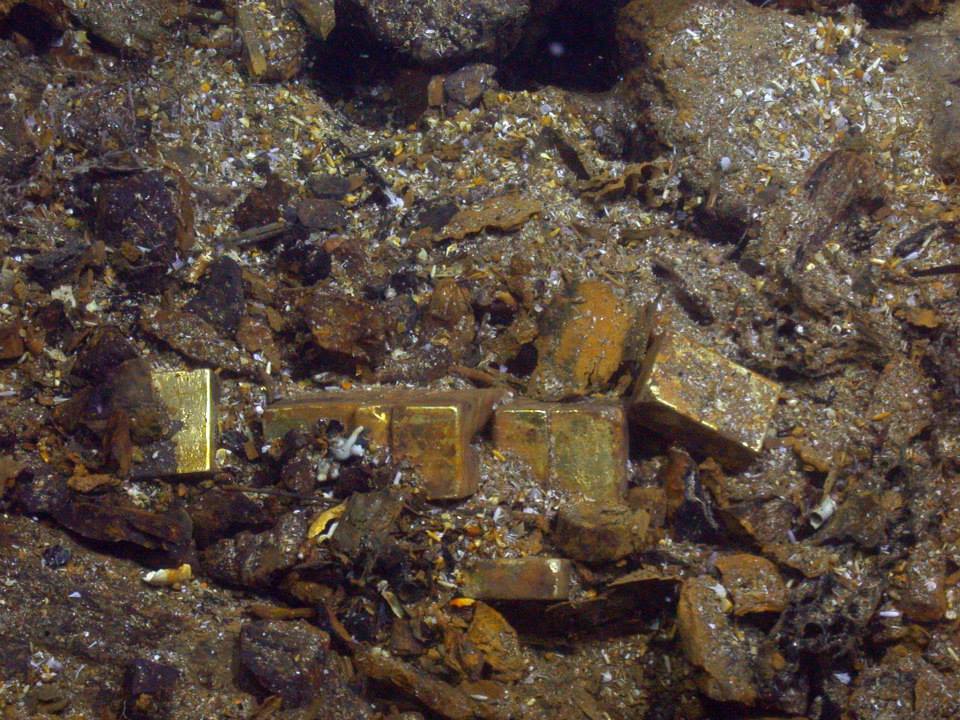 The inventories detail the items recovered to date, which include gold ingots, nuggets, dust and a wide variety of gold coins from $20 double eagles down through $10, $5, $2.50 and $1 gold coins, as well as California fractional gold, territorials and a wide variety of foreign gold. Additional significant cultural heritage artifacts have been identified and will be recovered.

RLP's chief scientist Bob Evans served as chief scientist on the 1988-1991 expeditions to the SS Central America and later as curator for the treasure recovered. As one of RLP's representatives on the project, Evans has been aboard the Odyssey Explorer since operations began in April 2014, cataloging the gold as it is recovered.

"The variety and quality of the coins being recovered is just astonishing," commented Evans. "Of course there are spectacular $20 double eagles like we found back in the 80s and 90s. But the wide variety of other denominations makes this year's recoveries very different from the earlier finds. I have seen what I believe are several of the finest known examples so far. The coins date from 1823 to 1857 and represent a wonderful diversity of denominations and mints, a time capsule of virtually all the coins that were used in 1857."

Odyssey President and Chief Operating Officer Mark Gordon added: "The operational reports filed with the court provide an overview of the activities conducted during each offshore period. The first two reports detail the pre-disturbance work and the recovery of items visible on the surface in the debris field, as well as initial archaeological excavation activities in the stern area of the shipwreck itself. The next report, which will be filed before July 25, will cover work conducted from mid-June to mid-July. As planned, during this period we made significant progress removing large amounts of coal and overburden to access certain areas of the shipwreck. We're looking forward to getting back to work at the site in the coming days."

About the SS Central America

The SS Central America was an 85-meter (280-foot) wooden-hulled, copper-sheathed, three-masted side-wheel steamship launched in 1853 as the SS George Law. Operating during the California Gold Rush era, the ship was in continuous service on the Atlantic leg of the Panama Route between New York and San Francisco, making 43 round trips between New York and Panama. The Central America was caught in a hurricane and sank 160 miles off the coast of South Carolina on September 12, 1857. When she was lost, the SS Central America was carrying a large consignment of gold for commercial parties, mainly in the form of ingots and freshly minted U.S. $20 Double Eagle coins. Because of the large quantity of gold lost with the ship, public confidence in the economy was shaken, which contributed to the Panic of 1857.

One of the SS Central America’s paddlewheels. 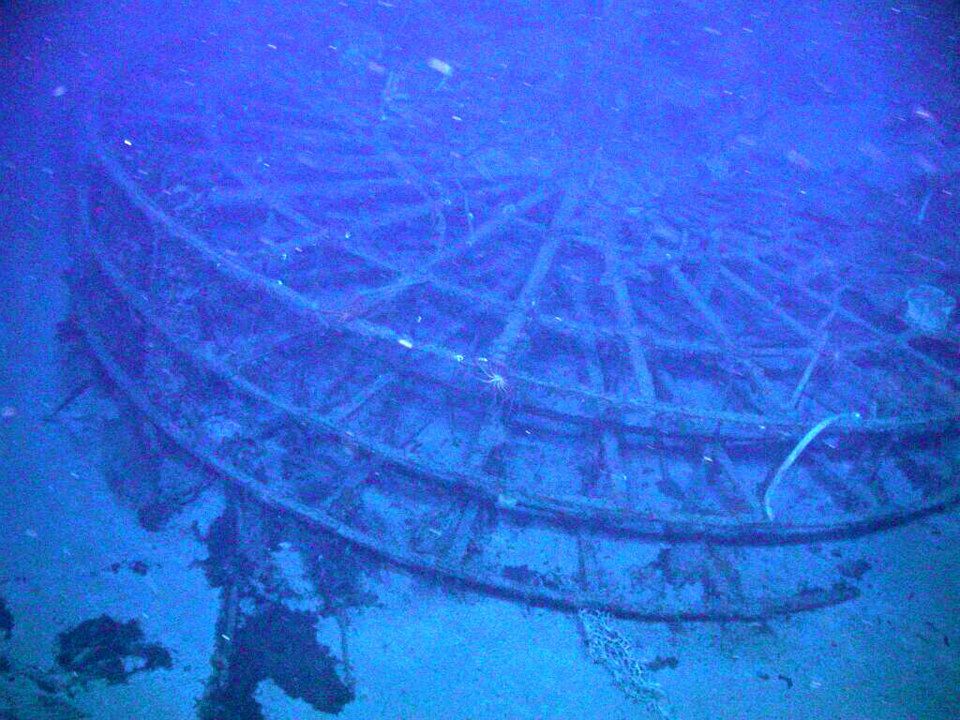 The location of the SS Central America shipwreck was confirmed in September 1988 at a depth of 2,200 meters (7,200 feet). Recovery operations were conducted over a four-year period (1988-1991) and a large quantity of commercial gold was recovered from approximately 5% of the shipwreck site during more than 1,000 hours of bottom time.

Odyssey was selected for the project by Ira Owen Kane, the court-appointed receiver who represents Recovery Limited Partnership (RLP) and Columbus Exploration LLC (CE). The contract was approved by the Common Pleas Court of Franklin County, Ohio, which has given Mr. Kane responsibility with overseeing the recovery project The United States District Court, Eastern District of Virginia has confirmed RLP as the salvor in possession of the SS Central America shipwreck and that Odyssey may conduct operations at the site on behalf of RLP.