A team of scientists at New York University have developed the first process to 3D print components of syntactic foam — extremely strong and lightweight composites used in vehicles, airplanes and ships. Their breakthrough holds particular promise for submarines because it will enable manufacturers to print components with complex shapes capable of surviving stresses at greater depths. 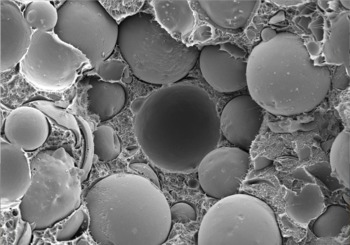 Syntactic foams, a mixture of billions of microscopic hollow glass or ceramic spheres in epoxy or plastic resin, are widely used in submarines, such as James Cameron’s Deepsea Challenger and the next-generation Alvin deep-sea explorer, because of their remarkable buoyancy and strength.

Currently, syntactic-foam parts are made by injection molding, and the parts must be joined with adhesives and fasteners, introducing vulnerabilities. However, the scientists, led by Nikhil Gupta, an associate professor of mechanical and aerospace engineering, student researchers and collaborators have been able to make the foam using off-the-shelf commercial 3D printers. The resulting materials showed tensile strength and density comparable to those made by injection molding.

The researchers developed filaments of high-density polyethylene plastic (HDPE), a material used to manufacture industrial-grade components, and microspheres made of recycled fly ash. (Encapsulating fly ash — a waste byproduct of coal combustion — in the syntactic foam also keeps the toxic material out of landfills.)

The team will now focus on optimizing the material properties for various applications, such as underwater vehicles capable of functioning at specific depths. The research was supported by the  U.S. Office of Naval Research.