For children, Christmas is a magical time: waiting for Santa and all the presents he will leave under the tree. But for some children their father won’t be there to share in the excitement. He’s likely to be hundreds or thousands of miles away working at sea.

“One seafarer I spoke to told me he has never spent a Christmas with his nine-year-old son due to his working pattern,” said Rev Joe O’Donnell, port chaplain on the River Clyde with the charity Stella Maris Apostleship of the Sea.

In ports around the country this Christmas, like every other year, Stella Maris chaplains and their teams of volunteer ship visitors will be trying to bring some of the Christmas spirit to the seafarers they meet. They want them to know that they might be strangers in a foreign land, but they are not forgotten.

Port chaplains understand that working at sea and being away from your family for long periods can be very lonely and make you feel disconnected from life at home. And not being at home at Christmas can heighten these feelings.

“Christmas can affect seafarers differently,” explained Rev Joe, a former engineer in the aviation industry.  “If their ship is tied up in port and everything closed, it can give seafarers more time to think about their families and this can cause anxiety and loneliness.”

“A lot of the guys have children and some of them are on nine to eleven month contracts. Just the thought of them missing such an important celebration can be very testing.

“Most seafarers at any time will tell you it’s difficult being so far away from their families, and sometimes they won’t be able to even communicate due to signal problems on their phone. When they are in ports during Christmas and have a bit more free time, it’s challenging for them.”

If possible, Joe will offer to take seafarers to Christmas services in the area. “Last year at our Christmas carol service in the port, a crew member from one of the ships chatted with me and said this was his first voyage since his wife had died.  We had been supporting him during his wife’s illness and eventually helped get him home a couple of weeks before she passed away.

“His wife was only in her early thirties with a very young daughter, so it had been a very difficult time for him being away from his daughter, and being so far from home during Christmas time didn’t help.

“He had told me that his Christian faith was very important to him and that the welcoming and gifts he received at the seafarers centre over Christmas helped him cope with his grief.

“As the carol service ended, he asked if he could play the guitar and he sang a song in memory of his wife and, as you can imagine, everyone there was deeply touched by this.”

Steve Willows (pictured), a Stella Maris port chaplain in Immingham, Lincolnshire, said he’s met seafarers who haven’t been at home at Christmas for as long as five years. 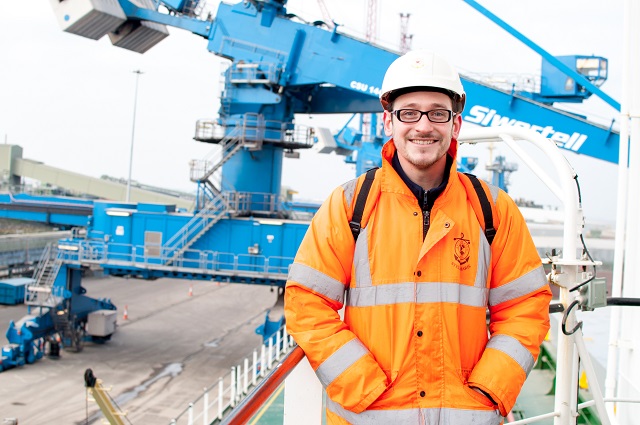 “In the best case they will hopefully have an internet connection, so they can see them at Christmas. When they hear that they will be going home for Christmas they are very excited,” he said.

A number of local Catholic parishes and schools support the work of Stella Maris, he explained, often donating warm clothing or shoe boxes containing items such as chocolates, toiletries, notepads, and DVDs.

“In Grimsby and Cleethorpes we have a weekend where we pack and wrap shoeboxes after Mass, so everyone can be involved. We find that people are so generous in helping. They realise that being able to do something small like filling a box full of items can make a big difference to the seafarers.

“When we gave out Christmas crackers for the first time, I remember having to explain them a lot to seafarers, who had never heard of them before, as it is not a worldwide tradition. I showed a You Tube video to some Filipino seafarers of people pulling the crackers, so that they had an idea of what you are meant to do with them.”

“We have many people donate their boxes of chocolates in January. If people have bought or received too many over the Christmas period and want to give them away, then they are greatly received by the guys on the ships.

One year, he happened to be on a few ships when some of the seafarers opened the gifts. “They were all very happy and swapping things between each other, but a few things stood out whilst being able to share in the happiness. One person was really grateful about shower gel. He was meant to be going home but had been delayed and he had just run out of his shower gel, so getting a new one came at just the right time. I also saw someone get really excited over a pen, which seems a strange thing to say, but he said that he kept losing pens. So even a pen can make a difference to someone.”

Each year, a number of seafarers attend a carol service at the Immingham Seafarers’ Centre, where they are joined by some of the locals.

The most rewarding part of being a Stella Maris port chaplain, said Steve, a former a community support worker for adults with autism, is being able to make a difference, no matter how small, to the lives of the seafarers he meets. And this is especially the case at Christmas.

“Most of the time you do not see the crew again, so you don't know the end result. But just knowing I have done my best in the time I have with them, made them feel welcome and provided them with what they needed, makes me happy.”