This is a historic year for Romania as it observes 100 years of the Great Union. Concerts, events, exhibitions and parades have been planned, and boats representing different regions of Romania will showcase its history and culture in various European capitals. But the pomp and pageantry of the Union Centenary may eclipse a smaller though equally important landmark – Romania’s seafarers celebrate 25 years of sailing on the borderless seas since the fall of communism. As anniversaries go, this one is tinged with a touch of skepticism.

25 years ago thousands of Romania’s seafarers suddenly found themselves unemployed, laid off or abandoned at foreign ports without so much as the return fare in their pocket. Many of their vessels had been arrested in foreign ports because of debt. Some ships were auctioned off hurriedly; others were sold cheaply or sent to scrap yards. In just seven years, the fleet dwindled to less than a seventh of its size. This led to an exodus of seafarers, from permanent jobs to one-voyage contracts with foreign carriers.

Romania emerged from a violent anti-communist revolution in December 1989 and went into a decade-long period of economic and political confusion, often referred to as “transition.” Saddled with a large unproductive fleet and a huge pool of trained seafarers, Romania’s water transport infrastructure was about to undergo a nerve-wracking shakeout.

Meanwhile, the global economy was witnessing a boom in seaborne trade following the establishment of the World Trade Organization. China was becoming the world’s manufacturing base, and Asian goods were reaching the farthest corners of the world. With the collapse of protectionist barriers, cargo shipping was on a roll like never before.

Historically, Romania was never a maritime nation like Greece or Croatia, but the communist regime in Bucharest had built up a large commercial fleet as part of an industrialization program. Most of the ships were locally built, with steel produced at home, and meant to carry Romania’s exports and imports.

By 1990, it swelled to 300 vessels – probably the fifth largest fleet then – manned by some 16,000 seafarers. After the collapse of communism, Romania neither had the money nor business smarts to keep the fleet profitable. By 1993, the government decided to divest all ship-holding and management to newly-created public sector enterprises.

What followed was bankruptcy and chaos. During the 1980’s and 1990’s, Romania’s officers and ratings were known to be notoriously underpaid by the local management companies. Many were living a hand-to-mouth existence with no future in sight. Some were reduced to smuggling in cigarettes and jeans to supplement their income. Lack of English language skills meant they were unlikely to find officer grade jobs on a foreign ship manned anytime soon.

At the same time, multinational fleet operators had little or no idea whether Romanian seafaring officers were competent professionals. Romanian officers themselves were not very confident they could sail with crew from different countries even though they often had adequate knowledge and skills.

“We were educated in the university system, while most officers from other countries came either from vocational schools or joined as ordinary seamen and got promoted through the ranks. The difference was in the way we could understand things. It was easier to process information and shape our skills in a shorter period of time,” says Daniel Tudorica, a former Master Mariner from Romania and now promoter of Wisark, a marine outsourcing company in Greece. 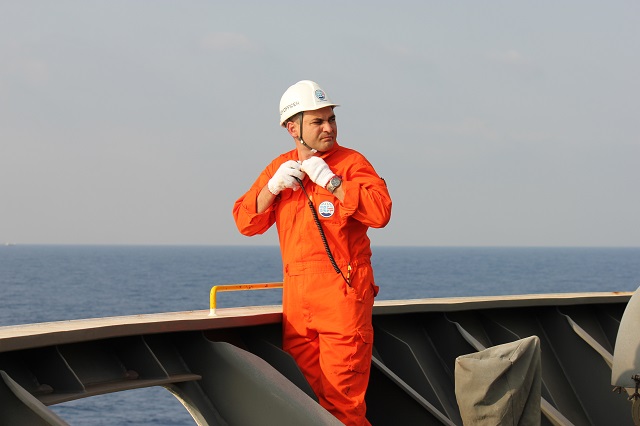 Romanian Chief Officer at work on board of a vessel. Picture credit: NYKSM

It’s been a tumultuous voyage since the fall of communism. Between 1990 and 1993, the national fleet sailed under severe economic constraints as Romania’s exports and imports nosedived. No new seafarers were employed under the national flag, and a large number of those who had reached their late 40s or early 50s were forced to retire.

Enrollment numbers in the marine school was drastically cut back. Almost half of Romania’s 16,000 seafarers left sailing to take shore jobs or start small businesses. Some engineroom officers took up shore-based engineering jobs. Disheartened by the uncertainty, many seafarers left sailing and took to driving taxis in Constantza or took up other lowly paid jobs.

But adversity can also be a good teacher. In the 1990’s, the Romanian fleet frequently faced a shortage of spare parts because most of the onboard equipment had been sourced from other Eastern Bloc countries. This supply chain disappeared shortly after East Europe emerged from communism. Working conditions on board ships deteriorated, and there was a perpetual crisis with spare parts and maintenance products, such as the quality of paints, says Eugen Barsan, a former officer and currently professor of Nautical Sciences and Simulation at Constanta Maritime University (CMU).

A generation of Romanians learned to make the best of what they had. “Confronted with these problems, Romanian seafarers (mainly those from Engine Room) became very good at improvising technical solutions and making things work with incredibly little resources,” Barsan adds. 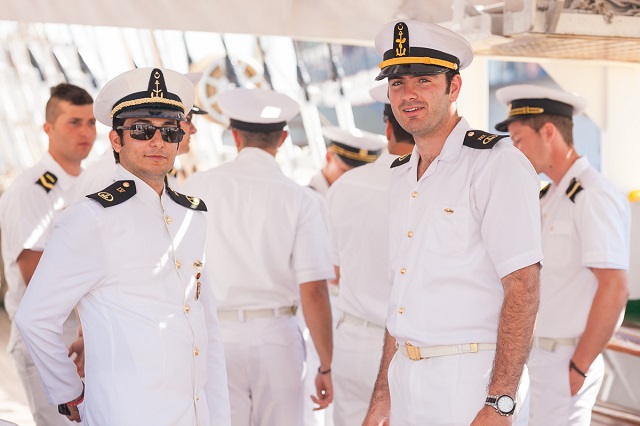 Cadets from the Mircea cel Batran Naval Academy in Constantza.

Since the early 2000’s, seafaring has made a robust comeback. For close to two decades now, Romanian crew has earned a reputation for being able, reliable and skillful for any kind of seagoing mission. Young officers, in particular, have been in high demand. Engineers and Electro-Technical Officerss from Romania have been recognized for their knowledge and practical skills. Millions of Euros have been invested in upgrading education infrastructure and bring it at par with the best maritime schools in the world.

“We are not competing with anybody but with ourselves,” says Dr. Cornel Panait, rector of the Constanta Maritime University. “I know from people who have visited our university, people at very high level and suppliers of equipment, that our university is at the top. We have very good trainers. A large number of our trainers have worked for long periods on board of ships.”

Panait’s optimism notwithstanding, the delayed recovery in the shipping economy has had alarming fallout – fewer students are becoming cadets, casting doubts on the future of seafaring in Romania. There has been a perceptible drop in the number of students who manage to complete their mandatory 12-month sailing apprenticeship for the officer’s license. According to statistics available with the local seafarer’s union, SNL, the number of students who become cadets is anywhere between 150 and 200. This is a small number when compared with the volume of students who enroll every year at maritime schools, says Adrian Mihalcioiu, SNL’s president and the local ITF representative. Moreover, only half of the cadets who get their officer’s license go on to become First Officers. The rest drop out after a few years of service, taking up shore jobs. 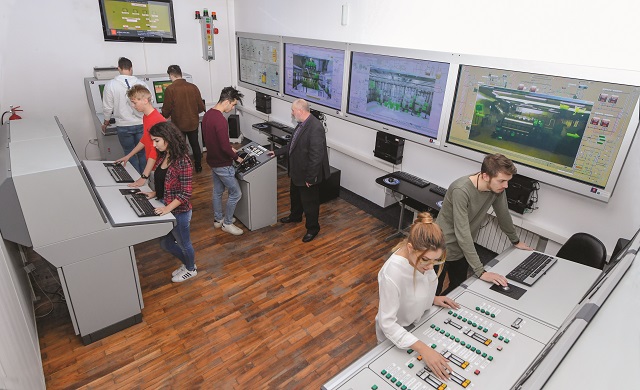 In many ways Romania is the last outpost of Europe’s once glorious seafaring tradition. It is probably the only European Union country which continues to inject large number of officers into the global seafaring pool. In most other E.U. countries with maritime history, seafaring is no longer the job of choice for young people because shore jobs are better paid and provide mobility and flexibility.

In Romania, however, seafaring remains an important profession for Romania’s coastal region and brings hundreds of millions worth of foreign exchange directly into the economy. It also generates jobs in an economically depressed region, where unemployment remains endemic. For Romanians, a salary received in dollars is still worth a lot more than one earned in Leu, the local currency. What’s equally important is that seafarers pay little or no income tax and minimum social security contributions.

This should have been enough to ensure seafaring’s future in Romania for several decades to come, but the situation doesn’t look so encouraging. As shipping limps to a slow recovery, thousands of cadet positions are at stake. Big shipowners are no longer investing in a dedicated catchment of officers, and manning agencies face a hurdle in building up their own pool.

“In the last 15 years, the first 13 were on an ascent due to our cadets. We were fighting with our clients and owners to take in more cadets, and we were not charging anything for this service. We built many dedicated crew pools in Romania on behalf of owners. But in the last two years we have exhausted our pool of fresh cadets,” says Ionut Rusu of Stargate Crewing, one of the top recruiters in Romania. “We have to start building our pool again.”

Does seafaring really have a future in Romania? Some feel it does and it always will because the job is well-paid and respectable when compared with what is available on shore. Today’s seafarers are more likely to be following their family tradition and probably have a father or an uncle on sea. Substantial numbers of those who are beginning their career today are second or third generation sailors.

The popularity of seafaring may not always be a demand-supply problem. The best students from good high schools are no longer going to maritime schools, they go abroad to study, or they go for medicine or computers. This could have an impact on the future competence of Romanian seafarers.

There are others who express cautious optimism. As shipping moves towards more automation and smaller crew, technology skills and multi-tasking will eventually transform seafaring. Laurentiu Lazar, a former Chief Officer and General Manager of the manning agency Barklav believes automation will gradually replace most of the human workforce, and crew may only be sent to sea when absolutely necessary. For the rest of the time, it will be a shore job.

“A new concept is expected: workforce-on-demand. People will be used on spot projects, as freelancers,” Lazar says, adding that Romanians should do well in shipping because of their knack for electronics, IT and electrotechnics.

Saugata Bagchi is a business writer based in Constanta, Romania.