Containerization of cargo started in India in the 80’s, and this had a very significant and positive impact on India’s trade for both import and export. CMA CGM started its Indian operations in 1989 and had great plans for expanding in the Indian sub-continent. Stéphane Berninet, Head of CMA CGM Project Cargo Division, describes the growth of the company and the nation:

Tell us about CMA CGM’s history in India?

CMA CGM started off with its own dedicated feeder service from Mumbai to the Middle East with two vessels: M.V. Ville De Colombo and M.V. Ville De Dubai. The growth in the Indian/European trade prompted CMA CGM to start a direct service to Europe. IPEX (India Pakistan Europe Xpress) was launched in 1995, and we shifted operations from Mumbai to Nhava Sheva with the established JNPT terminal.

This was also the time when rail connectivity to ports was growing at a rapid pace and the Container Corporation of India (CONCOR), in partnership with the shipping ministry, was instrumental in the commissioning of several inland container depots, mostly in western and northern India. With volumes picking up from these dry ports, it was only natural for us to expand by opening offices wherever possible and to increase our investments in various land activities with container freight stations, inland container depots, inter-modal and terminal activities.

In the last two decades a lot of new hi-tech ports were developed and thrown open to the trade. Simultaneously, smaller ports were upgraded and developed further to accommodate main line vessels and help the development of coastal shipping along the Indian coast line. During all these years, CMA CGM also adapted to the changing global business environment and upgraded their products and services to be amongst the top shipping lines in the world.

From being an agency to becoming a full-fledged, multinational shipping company and rising to be among the top shipping companies in the world, CMA CGM has seen and undergone the whole gamut of reinventions and modifications to keep pace with the changing business environment in India. 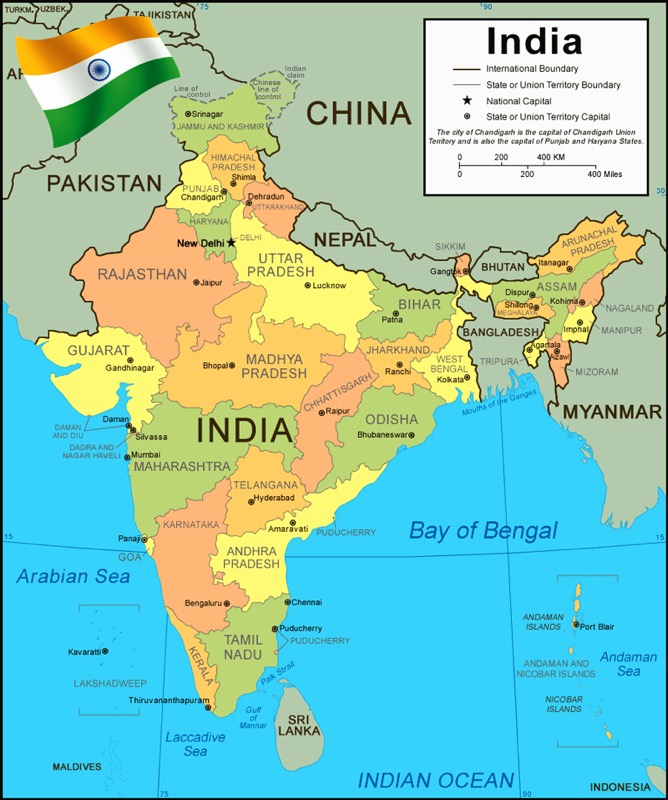 What is CMA CGM's footprint in India now?

Today, CMA CGM group (which comprises of three brands: CMA CGM, APL and ANL, each with its own unique identity) operates 14 weekly services in and out of India, covering the entire world geography.

CMA CGM today is able to offer a one stop solution to its customers, offering value added products, e-commerce and end to end solutions through its various group subsidiaries, CMA CGM Logistics and LCL Logistix, with the sole objective of being customer-centric. We intend to focus on a very fast growing market, i.e. India.

Compared to China, the upgrading of port infrastructure in India has been relatively slow, but the government is taking measures to catch up with the increasing demand of import as well as export.

India is one of the fastest growing economies in the world. It is growing in all aspects of infrastructure and necessary facilities. There is a lot of development that has happened recently that has made India far more competitive compared to other developed countries.

Heavy lift capacity wasn’t available in container terminal facilities until recently, but there is a 200-meter crane available now in Nhava Sheva. Recent developments in Mundra and Nhava Sheva are showing that there is urgent demand to catch up with domestic and international needs.

Ennore port is also coming up in Chennai, which is outside the city, providing fast road movement of bigger sized and out of gauge trailers.

With all these container terminals covering major Indian sectors, many solutions are possible for the larger project cargoes all over.

Indian terminals, except for Mundra, have been very reluctant to handle break bulk on container vessels due to their inexperience and initial fears, as it has been with many other container ports the world over.

One of the major problems was that no container terminals were equipped with proper heavy lift handling equipment or with experienced personnel in that sector. Moreover, state owned port authorities insisted on handling break bulk cargo in conventional piers only.

It took many years of lobbying to change that attitude, to make them aware that break bulk handling isn’t as complicated as the term makes it sound. Container ports should adapt to partner with container carriers who propose ‘containerizing’ their customers’ oversized and heavy lift cargoes.

Our project cargo experts first visited Nhava Sheva, Chennai and Cochin’s ports in 2012 for a Franco-Indian military engagement for coast guards. Thanks to some good contacts at the terminals, we broke the ice and have successfully handled various projects in Chennai, Nhava Sheva, Hazira, Cochin and Mundra on various trades.

There are various ports at which we presently operate in India:

Break bulk has been handled from the following ports:

Effective January 2019, CMA CGM will be handling break bulk discharge in Kolkata as well. Vizag’s port works well as a gateway into the South East Indian states of Andhra, Telangana, Chattisgarh and Orissa, and these states have recently been inviting a lot of investments from big manufacturing companies. Therefore, we expect break bulk cargo to move in and out of these ports as well.

Tell us about some of the project cargoes that you have handled to and from India?

Project cargo customers have trusted CMA CGM with regular shipments through India, and we are strengthening our position after successfully completing a series of different projects. Amongst them, we can highlight that we are regularly shipping transformers, mainly from Mundra to Africa and vice versa, with weight varying from 52 to 73 meters, as well as various types of machinery.

Our U.S. team has been particularly active in generating a good number of projects, and we have been contracted to ship SKD locomotives of various sizes and sill bars, including round trip shipments in the India – U.S. trade.

Recently, we shipped a helicopter from Nhava Sheva to London Gateway. Look at the interesting lifting apparatus. The same has been used for loading and discharging at each respective end.

The helicopter rigging is a single shackle attachment for the four lift-wires (polyester round slings) fitted to the container spreader to be employed by each respective terminal. The round lifter, 6.5 meter SWL, was rigged with five nylon belts tied on the rotor hub which had no locking mechanism and thus remained free to rotate, relative to the helicopter. 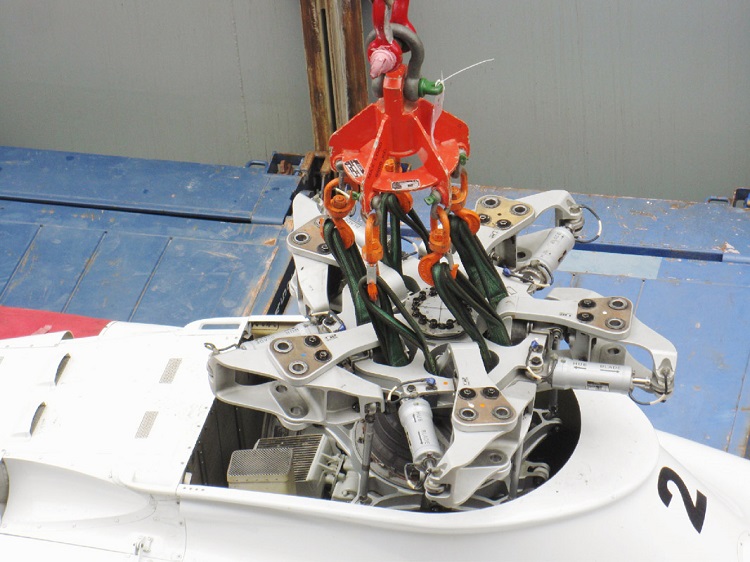 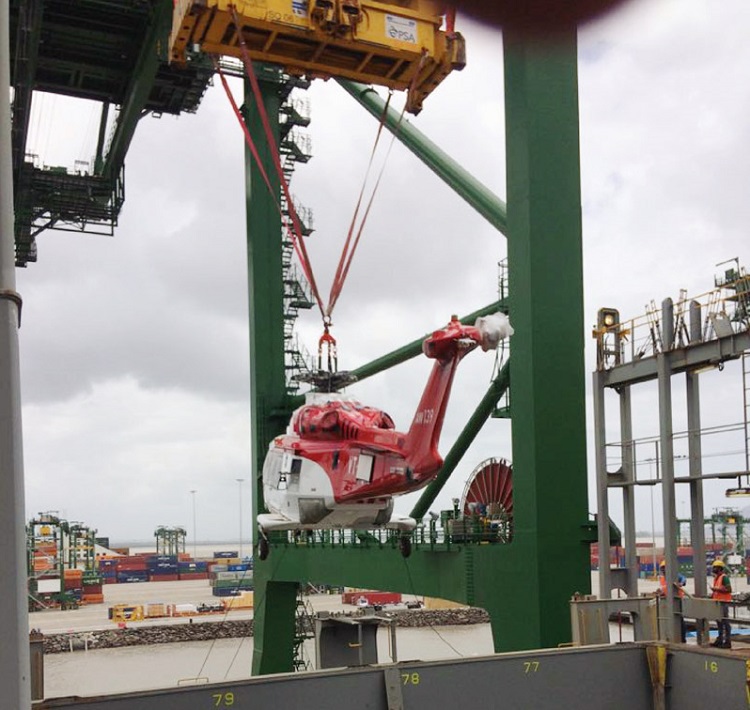 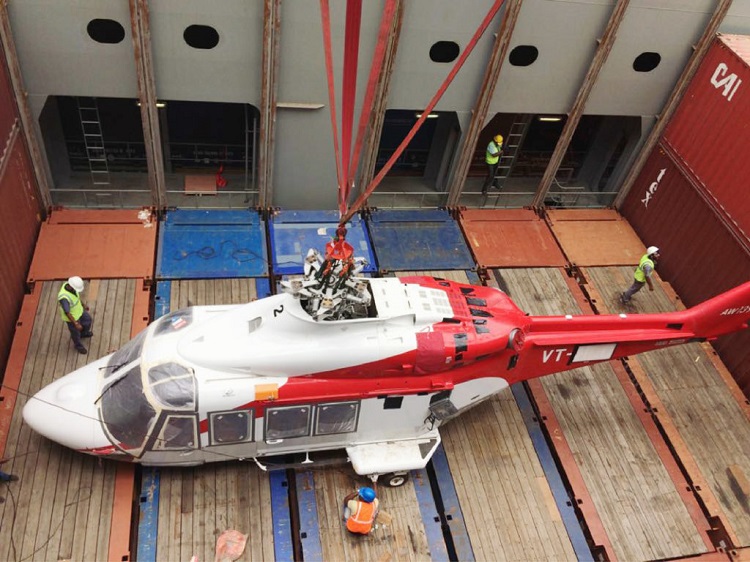