Elliott Bay Design Group (EBDG) led a complex weld engineering and inspection project for the USNS SBX-1. Project success is attributed to a strong team of industry experts including several of our licensed engineers who are certified welding inspectors (CWI) through the American Welding Society (AWS).

EBDG developed an optimized weld procedure for an uncommon grade of steel for Tote Services, LLC, in support of work on the USNS SBX-1 X-band radar vessel. This unique vessel is part of the United States Department of Defense Missile Defense Agency and provides key tracking and identification of potential ballistic missile threats. The regulatory agencies in control of the approval and oversight of the procedure included the American Bureau of Shipping (ABS) and United States Coast Guard (USCG), in support of the ultimate owner, the Department of Defense (DoD) Military Sealift Command (MSC).

The challenge for this effort was to develop a regulatory-approved weld procedure appropriate to the exotic grade of steel used for the hull of the SBX-1. The steel is an American Bureau of Shipping (ABS) grade FH-36 low temperature steel. This steel is suitable for service in arctic conditions as it retains higher impact toughness in very cold ambient temperatures when compared to more common ABS grade A steel.

As the SBX-1 is a semi-submersible platform vessel, it was necessary to cut large access hatches in the hull columns to extract equipment being refurbished and replaced. The work required replacement and re-welding of the access cutouts in steel plating up to 40 mm (over 1.5 inches) thick.

The weld procedure used previously on the vessel for a similar project required extensive post weld heat treatment (PWHT). The heat treatment was necessary to ensure the completed weldment had satisfactory low temperature impact strength. Using the standard approach with PWHT required that the steel be brought to and held at 1,100 degrees F, and back to ambient in a controlled manner over many hours. Further complicating the process, the required heat-controlled area extended over a large exterior area of the vessel thus requiring customized high temperature heat blankets and a specialized subcontractor to execute the work. This resulted in significant cost and schedule impact occurring at the very end of the shipyard period.

The objective was to develop a new weld procedure which did not require this extensive PWHT effort.

EBDG developed a new weld procedure specification (WPS) that is practical to implement in the field and provided the required cold temperature toughness, without expensive and time intensive post weld heat treatment.

For the ABS steel on this project, the critical material property to manage was toughness, which is a measure of the ductility of the steel at the lower required temperatures. When steel is welded, it changes from solid to liquid and back again. The rate at which the steel transitions between phases impacts the resulting microstructure of the steel.

For this case, excessively rapid cooling of the weld puddle results in brittle microstructures unsuitable at low temperatures. The cooling process is also influenced by the thickness of the material being welded. Thick plates such as those on SBX-1 act as a heat sink, drawing heat rapidly away from the joint. EBDG determined an appropriate size for the test assemblies that would approximate the cooling rates for the actual vessel joints. The size of the test assemblies used was significantly larger than the minimum size required by ABS for approval of the weld itself. This extra effort gave us greater confidence our test results would effectively represent the actual installation.

There are two general approaches to control the initial rate of cooling of a weldment: preheating the joint, and heat input during the welding process. Preheat is a process of raising the temperature of the base metal above ambient prior to welding by using a torch or other heat source. Heat input during welding is governed by the arc energy (volts and amps) and the travel speed of the welder. EBDG calculated the maximum allowable initial cooling rate and identified the ranges of acceptable welding parameters. We also established a range of preheat for our test assemblies.

EBDG obtained approval from ABS to create the test assemblies using both applicable grades of steel in one weldment. Combining the two steel grades into one assembly effectively reduced the cost and effort of the testing by 50 percent. Due to the exotic nature of the material and limited supply, we sourced the steel from two separate mills, one domestic and one overseas. EBDG directly purchased the steel from both suppliers, and coordinated shipping and customs import from the overseas vendor. 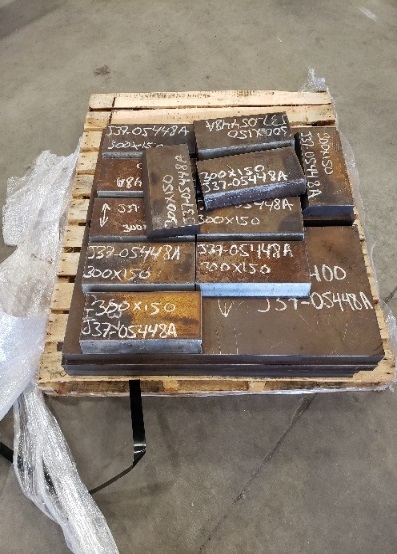 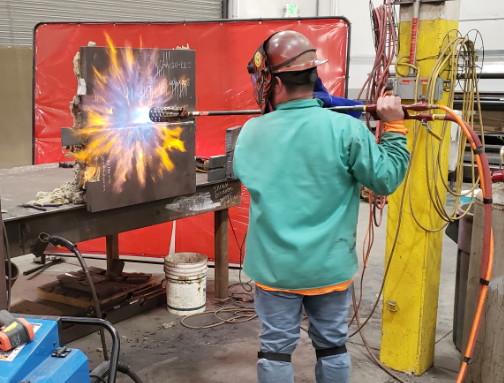 All bulk plates were shipped to Chapel Steel in Portland, Oregon. At Chapel Steel, the plates were broken out into smaller pieces for the test assemblies, and bevels were cut on the FH36 plates. Chapel used their "high definition" plasma cutting process to provide clean, accurate cuts that required only minimal additional preparation prior to welding. 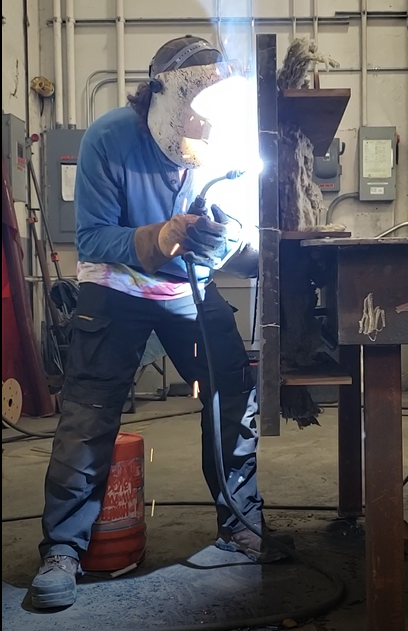 EBDG partnered with Industrial Resources Incorporated (IRI) at their Sedro Woolley, Washington location for fabrication and welding of the test assemblies for the range of weld procedure configurations. EBDG worked with IRI to identify weld parameters that would both satisfy the material property requirement and be usable for the real-world fabrication on the vessel. EBDG determined the widest range possible on the critical weld parameters that would then give the most possible flexibility in weld machine set-up, which helps accommodate a range of welding techniques between different operators.

At IRI's fabrication shop, test assemblies were welded using a matrix of preheat values and heat inputs that allowed us to understand how the different inputs affected the critical material property of low temperature toughness. The test assemblies were prepared in both the vertical (3G) and horizontal (2G) positions to provide a procedure that can be used for the joint orientations on the vessel. The gas shielded flux-core process (FCAW-G) was used for the welding, and a propane "dragon's breath" torch was used for preheating the assemblies to 350 degrees F. The joints were single bevel with ceramic backing for the root pass, as per client specification. The extra nickel content in the FH-36 plate proved to be a challenge to maintain puddle shape without slumping for the horizontal position. EBDG worked with IRI to fine tune the joint dimensions, root gap, and weld parameters to encourage high quality welds in either position. EBDG observed, inspected, and recorded every weld pass on each test assembly.

IRI's skilled fabricators and EBDG's theoretical and practical weld knowledge were crucial to the success of the project.

EBDG employed the Mistras Group (Mistras) in Burlington and Ferndale, Washington to provide nondestructive and destructive testing of the completed test assemblies. Mistras delivered prompt, expert testing services that kept the project timeline on track. EBDG and ABS were on site to witness the testing. 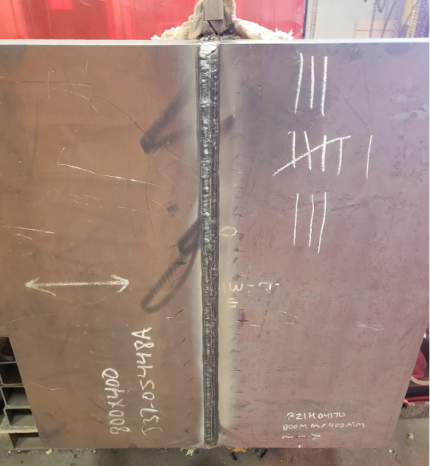 EBDG first evaluated the completed test assemblies via a visual inspection by our American Welding Society (AWS) Certified Welding Inspectors (CWI). Then Mistras provided nondestructive X-ray and dye penetrant examination. From there, the assemblies were processed by Mistras into destructive test coupons. The type, quantity, and methodology of the testing was performed in accordance with ABS requirements and AWS D1.1 Structural Welding Code.

To conclude the program, EBDG prepared a final revision of the weld procedure, compiled the applicable testing documentation, and submitted the package to ABS for regulatory review and approval. ABS also provided onsite witness during the fabrication and testing throughout the project. EBDG worked closely with ABS' engineering team during their review to satisfy their questions and obtained prompt approval of the final procedure.

As final proof of the success of the procedure development, it was successfully implemented by the shipyard with the final welded joints passing all quality assurance and performance requirements.