The International Transport Forum has released a report The Impact of Alliances in Container Shipping highlighting the link between alliances and overcapacity, declining schedule reliability and longer waiting times.

Whereas early generations of global alliances that emerged in the mid-1990s provided a vehicle for cooperation between smaller carriers, alliances nowadays are tools for the largest container lines: the three global alliances (2M, Ocean and THE Alliance) that have been operational since April 2017 regroup the eight largest container carriers of the world. These three alliances represent around 80 percent of overall container trade and operate around 95 percent of the total ship capacity on East-West trade lanes, where the major containerized flows occur.

Alliances have allowed carriers to acquire and operate mega-ships, reducing unit costs, and without alliances certain carriers would not have been able to acquire mega-ships. However the report states that as it is the ordering of mega-ships that has fueled overcapacity, there is a link between alliances and overcapacity. Alliances have also made the maritime transport offer more uniform and limited the possibilities of carriers to differentiate themselves. Alliances have contributed to lower service frequencies, fewer direct port-to-port connections, declining schedule reliability and longer waiting times.

This has increased total transport times and delivery uncertainty for various shippers, leading to higher inventory and buffer costs. Moreover, alliances have proved to be inherently unstable: considering that all major carriers are in alliances, changes in one alliance can have an impact on the whole sector.

Alliances contribute to the concentration of port networks and bigger cargo shifts from one port to another when alliances change port networks. Within ports, the buying power of the alliance carriers can create destructive competition between terminal operators and between other port service providers such as towage companies. This can lower the rates of return on investment for the port industry, result in the decline of smaller container ports and the disappearance of smaller independent terminal operators and towage companies.

The market share of carrier-dominated terminal operators has increased from 18 percent in 2001 to 38 percent in 2017. This could raise competition concerns if dedicated terminals exclude other carriers and if carriers’ terminal investments raise entry costs that make container shipping a less contestable market.

Alliances frequently exert strong pressure for publicly funded infrastructure upgrades to be undertaken to support the use of megaships, while these expenditures often prove to be uneconomic, either due to shifting demand for port services or the power exercised by the alliances.

Although overcapacity in the liner sector has lowered freight rates, these cost savings are partly offset by a number of additional costs for shippers. Moreover, by limiting shipping options, alliances have frustrated the risk diversification strategies of shippers and freight forwarders.

Alliances could raise competition concerns in what has become a concentrated market. The top four carriers accounted for 60 percent of the global container shipping market in 2018. The market share of the biggest carrier (19 percent) is larger than the market share of any global liner alliance before 2012, which signifies the different character of current alliances. 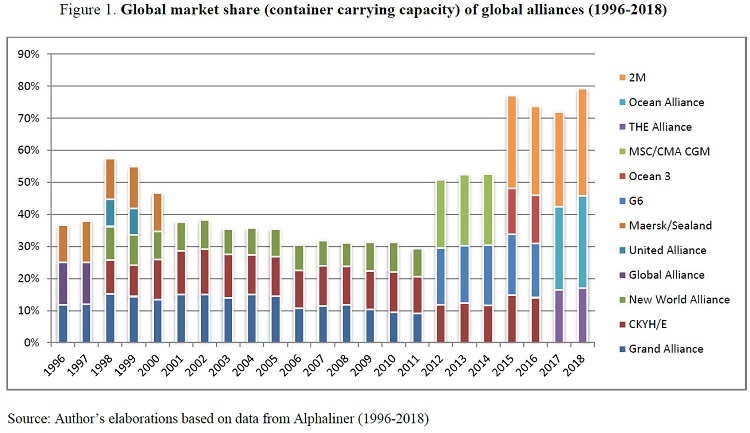 Global alliances represent barriers to entry on East-West trades: only the largest companies would be able to compete on price for Asia-Europe services outside an alliance structure. Second, alliances could function as vehicles for collusion between carriers, as they provide carriers with in-depth insights on the cost structures of their competitors. 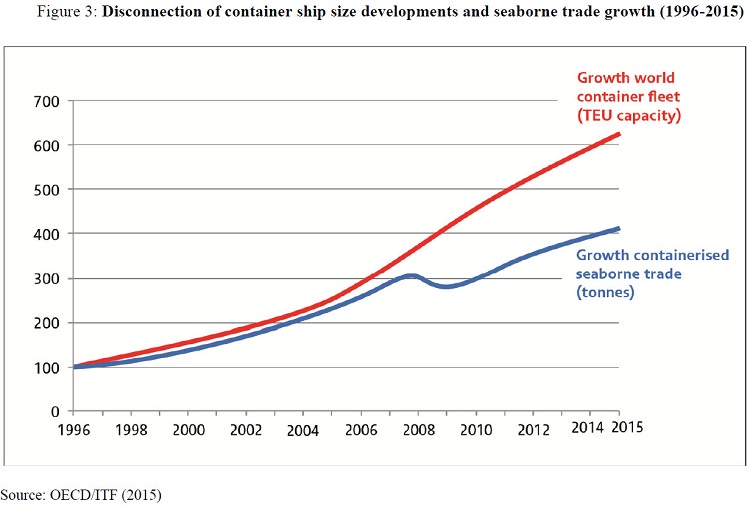 The International Transport Forum is an intergovernmental organization with 59 member countries. It is politically autonomous and administratively integrated with the OECD.