2018 will be the worst year on record for personal injury accidents and fatalities on ships carrying solid bulk cargoes, with at least 24 reported fatalities. There were also a number of serious injuries, including possible brain injury.

An estimated 23 people died due to asphyxiation or carbon monoxide poisoning in cargo holds, and one seafarer died in an explosion. Of the 24 fatalities, 18 were shore workers and six were crew members. Apart from the explosion accident there were also six cargo fires reported – one at sea and five in port. 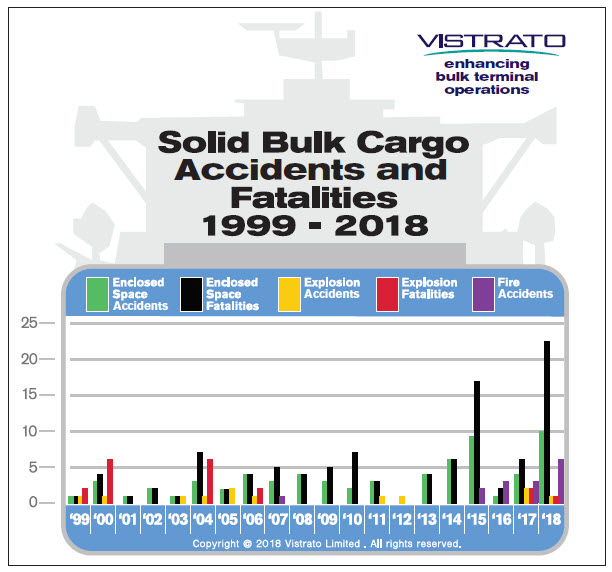 The figures are based on data collated by the author from both official reports and media sources. It is undoubtedly a significant underestimation of the total number of ship and shore workers who have died during the loading, carriage and unloading of solid bulk cargoes.

These accidents occurred on ships both at sea and in ports worldwide, including ports in Sweden, Germany, Netherlands, U.K., Italy, Oman, India, Vietnam, Indonesia, New Zealand, Brazil and Uruguay.

The total number of reported fatalities for the period 1999-2018 is 125, of which 106 were due to asphyxiation arising from oxygen depletion and/or toxic gasses in the cargo holds or adjacent spaces. The remaining 19 fatalities were due to explosions. Some 80 of those who died due to asphyxiation died on the hold access ladder. All the cargoes involved in these accidents, apart from three involving grain, were covered by the IMO’s International Maritime Solid Bulk Cargoes Code (IMSBC Code).

Accidents investigation reports and comment by shipping industry organizations almost always lay the blame for these accidents on human error and typically recommend that behavioral issues need to be addressed.

The reality is that while human error may have been a contributory factor in certain of these accidents, the fact they all follow a similar pattern shows that the root cause is related to gaps in both the regulations and the safety management systems that are intended to prevent them, and not with the victims.

The carriage of solid bulk cargoes is governed worldwide by the IMSBC Code, under the mandatory provisions of the SOLAS Convention. The primary aim of the Code is to facilitate the safe shipment of solid bulk cargoes by providing information on any hazards they present and instructions on procedures to be used to ensure their safe handling and shipment.

It classifies cargoes in three groups; Group A (cargoes which may liquefy), Group B (cargoes possessing a chemical hazard) and Group C (not Groups A or B). Cargoes that can cause oxygen depletion, toxic gasses, fires, explosions or other dangerous situations on ships are classified as Group B.

The two cargoes responsible for the most fatalities are coal and wood products including logs, sawn and packaged timber, wood pellets and wood chips. Numerous accidents have occurred with other Group B cargoes, and some have also occurred with cargoes classified as Group C or not yet classified at all.

The IMSBC Code (2018 edition) lists some 380 solid bulk materials by Group and provides information on specific hazards they may present and the precautions to be observed by shippers, masters and the ports and terminals handling them.

Where a cargo is not listed in the IMSBC Code, the shipper must obtain a certificate setting out the conditions under which it may be shipped from the competent authority of the port of loading.

In addition, the shipper must also provide the master with the Shipper’s Form for Cargo Information declaring details of any special properties of the cargo that the master needs to be know so as to implement the precautions required for its safe shipment.

While it is intended that a systematic risk assessment should be carried out by the master every time any solid bulk cargo is due to be loaded, carried and unloaded, or before anyone attempts to enter a cargo hold, it is clear that this is not always done.

It is imperative that the cargo information provided in the IMSBC Code and the Shipper’s Form for Cargo Information is carefully assessed by a competent person to identify the hazards, assess the risks and implement the required controls in consultation with those concerned, including crew members, stevedores and surveyors.

Where an initial assessment indicates that the cargo is Group B, then alarm bells should be ringing and action taken immediately to secure the hold access hatches and post warning signs to prevent unauthorized or accidental entry. All cargo spaces containing solid bulk cargoes, and at-risk adjacent spaces, should be considered hazardous until confirmed safe and an entry permit issued.

If this continuing appalling loss of life, injury and damage is to be prevented, then current procedures need to be amended so as to ensure formal risk assessments are carried out on every ship every time any solid bulk cargo is handled. Work is underway to see if this can be done.