The Value of the Jones Act Fleet: $4.6 Billion

With the annual Connecticut Maritime Association trade show in Stamford, Connecticut, commencing March 21, VesselsValue has taken a look at the value of the U.S. fleet and its activity in the last twelve months.

There are currently 160 U.S.-built bulkers, tankers and gas carrier vessels on order or on the water (see Table 1). The total capacity of these vessels is just over seven million dwt, with a total current value of $4.5 billion. Globally, the U.S. is ranked in eleventh place by shipbuilding capacity and a respectable sixth place behind the South Korea, Japan, China, the Philippines, Germany and Turkey in terms of the current value of the American-built fleet.

Based on the volume of ships on the water, the most prolific ship builder is NASSCO, the commercial and naval building subsidiary of General Dynamics. This is the only deep-sea shipbuilding facility on the U.S. West Coast, with two other shipyards on the East Coast at Mayport and Norfolk. VesselsValue currently values the surviving output of NASSCO at around $900 million, excluding deleted ships. NASSCO has just launched the 50,000 dwt MR2 tanker Independence, which we value at $130 million (including a premium for the Jones Act). The Independence will be joined by two MR2 tankers on order at NASSCO for Seabulk Tankers. NASSCO also has four MR2 tankers on its orderbook for American Petroleum Tankers. The yard also recently delivered the 3,100 TEU Isla Bella, for TOTE Maritime, which is reported to be the first modern LNG fueled container ship.

The only other US shipyard with bulker, tanker and gas carrier vessels on its orderbook is Philly Shipyard (formerly known as Aker Philadelphia Shipyard). Philly Shipyard mainly builds product tankers, but has also built four containerships. The yard's built fleet is currently valued at just over one billion dollars. Its orderbook consists of eight 50,000 DWT MR tankers to a design approved by ABS for LNG fueling, if the owner decides to choose this option.

One widely acknowledged consequence of the Jones Act is that the US-built fleet is considerably older than the global, non-US built fleet.

Nonetheless, the US-built bulker fleet has an average age of 46 years versus nine years for the global fleet. Even a relatively modern ship type, such as container vessels, are on average 32 years old, positively ancient compared to an average of 11 years old for non-US built vessels.

VesselsValue finds that the top ten US shipowners ranked by value control around half the capacity of the US fleet (see Table 2).

The top ten shipowners are tanker companies or the tanker arms of oil majors. The current most valuable U.S. operated fleet is that of American Shipping Co., a Norwegian public company controlling a fleet of ten MR2 tankers built at Philly Shipyard and leased out to OSG, which charters them to Jones Act qualifying companies.

VesselsValue estimates this fleet is worth $830 million. The second most valuable US fleet belongs to new entrant American Petroleum Tankers, a subsidiary of Kinder Morgan Terminals, with its fleet operated by Crowley Maritime. This fleet will be supplemented by the MR tankers currently on the orderbook of NASSCO. However, in the last twelve months the US orderbook has been very quiet, with no bulker, tankers or gas carrier orders placed.

If there is one area where US shipping has been active, it’s in the sale & purchase market. The dire dry bulk market is one of the driving forces behind Scorpio Bulker selling 25 vessels in the last twelve months for an estimated value of $878 million. Altogether 88 vessels have been sold by US owners for an estimated value $3.4 billion. 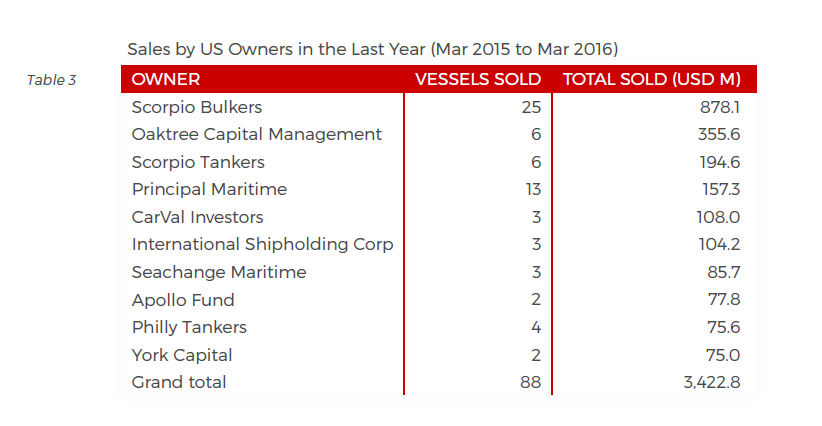 Of course, under the US Jones Act, US companies cannot purchase foreign-built vessels to operate in US waters. This reduces the pool of potential purchases, which in the last twelve months have been limited to just eight vessels, including four MR tankers from Philly Shipyard purchased by Kinder Morgan for a reported $568 million.