Across the fleet, on warships and at naval bases, a 96-round salute – one every ten seconds – was fired off to commemorate each year of The Queen’s historic life

On a grey, wet, windy December day in 2017, wrapped in a thick purple coat, Queen Elizabeth II stood in the hangar of Britain’s newest, largest warship.

Before her around 3,000 people – not just ship’s company, but ambassadors, shipwrights, military leaders, families, musicians, politicians, and global media.

“As the daughter, wife and mother of naval officers, I recognise the unique demands our nation asks of you and I will always value my special link with HMS Queen Elizabeth, her ship’s company and their families,” she told those present at the carrier’s commissioning ceremony. 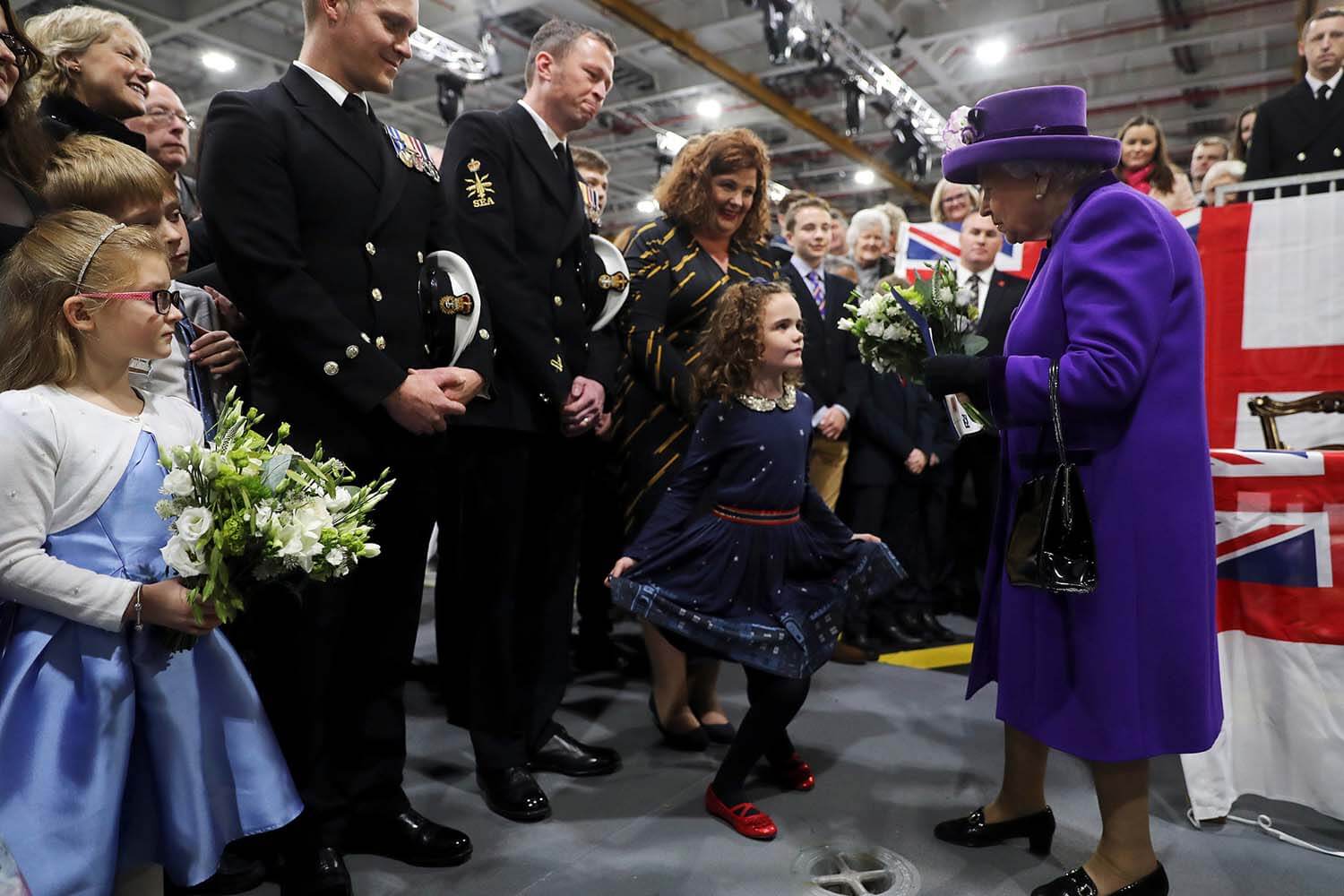 Her words underlined the importance of the Royal Navy to her – a golden thread running through a long, eventful life and reign and a century unparalleled in the history of the Navy and Nation.

For as she declared at the naming of the same aircraft carrier in 2014: “Lord Mountbatten told my father on becoming King there is no more fitting preparation to be King than to have been trained in the Royal Navy.

“My own personal associations, especially as the proud sponsor of six other warships and submarines, remind me that reputation for excellence continues to this day.”

Her Majesty’s first encounters with the Royal Navy were familial. She was born into a naval family, her father, then Duke of York, served before and during the Great War, including at the Battle of Jutland in the battleship HMS Collingwood.

In the year after the Princess Elizabeth’s birth, the Duke and Duchess of York made an official visit to Australia embarked in HMS Renown.

She joined her parents aboard the old Royal Yacht Victoria and Albert at the Coronation Fleet review in 1937 – the first of many such gatherings of naval might she would attend over 75 years.

Two years later she was famously hosted by a young Prince Philip Mountbatten while the King and Queen visited Britannia Royal Naval College. They corresponded throughout the war and married in November 1947.

For a brief period, she was both Royal Princess and naval wife, living, when possible, in Malta while Prince Philip was serving with the Mediterranean Fleet as First Lieutenant of the destroyer HMS Chequers and then in command of the frigate HMS Magpie. 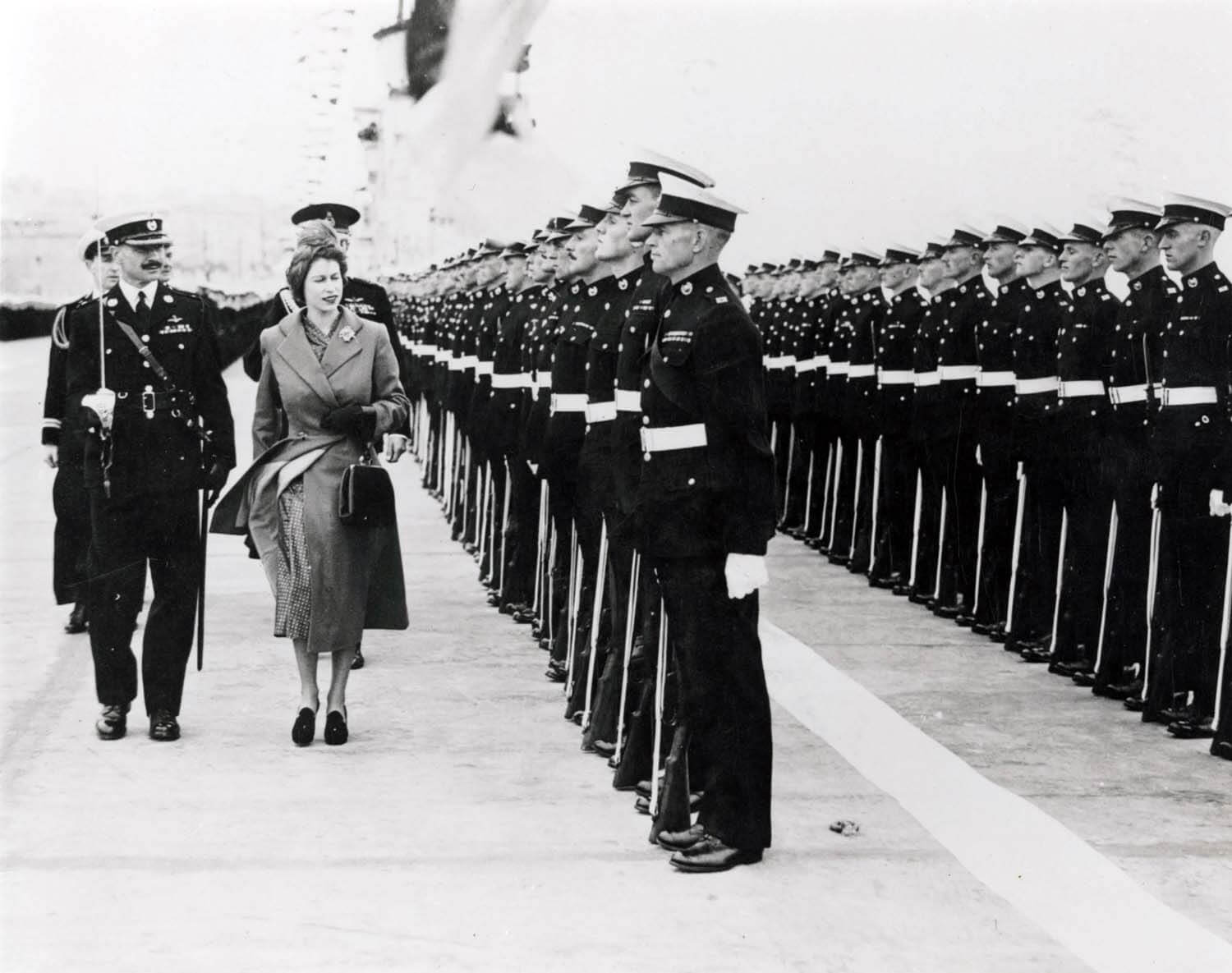 In time, the future King Charles III would follow in his father’s footsteps (1971-76), training as a naval helicopter pilot and later taking command of the minesweeper HMS Bronington, followed by his younger brother. Prince Andrew served in the Falklands as a helicopter pilot in 820 Squadron, flying Sea Kings from HMS Invincible, and later commanding the mine-hunter HMS Cottesmore.

Princess Anne, The Princess Royal, has been Chief Commandant for women in the RN since 1974, while Prince Edward, Earl of Wessex, has been Commodore-in-Chief of the Royal Fleet Auxiliary since 2006.

Few people have launched more ships than The Queen – more than half a dozen warships and submarines alone, beginning aged just 18 with the mighty battleship (Britain’s last) HMS Vanguard.

The teenage princess was not fazed by the magnitude of either the ship or occasion. Vanguard, she declared, was a "truly magnificent addition to the Royal Navy", the embodiment of three years' work by the shipwrights and engineers of the Clyde. "They must surely have put something into her which is part of the staunchness of our race."

First Lord of the Admiralty Albert Victor Alexander — the political head of the Navy — was impressed by the young princess' bearing. She had, he noted, carried out her duty in a "clear and decisive way".

With the untimely death of her father in 1952, the role of Monarch brought a myriad naval duties.

When the Royal Navy – and warships from across the Commonwealth – mustered in the Solent for the Coronation Fleet Review in June 1952, The Queen expressed her great pleasure and looked forward “to the further visits which I hope to make to you in the future.”

Of the numerous vessels she has sponsored since launching HMS Vanguard, only two remain in service today: HMS Lancaster (‘The Queen’s Frigate’) and HMS Queen Elizabeth.

Both are currently deployed on active service: the frigate with NATO in the Mediterranean, the carrier crossing the Atlantic to host an international security forum.

Each ship provides regular updates on their activities and progress, the sponsor visiting when her busy schedule allowed (2014 for Lancaster, when The Queen famously joined crew on the forecastle for a unique ship’s photograph; May last year for HMS Queen Elizabeth).

There have been numerous opportunities to witness the Royal Navy operationally: a Royal tour of South Africa with HMS Vanguard in 1947; an official visit to Athens aboard HMS Surprise, Flagship of the Commander in Chief Mediterranean, in late 1950, escorted by HMS Magpie, with her husband in command.

Her first world tour as Sovereign, started in the SS Gothic, and completed in the new HMY Britannia, was escorted by a series of RN and Commonwealth ships.

There was no vessel of which she was fonder than the Royal Yacht, beloved by both the Royal Family and the men who served aboard for more than 40 years.

The Royal Navy was often called upon to provide an escort for Britannia, whether at the highest profile of State visits, such as the US Bicentennial Fleet Review in 1976, or to guard the Royal Family’s privacy during their summer holiday cruises in the Western Isles. Britannia also provided one of her strongest links with the Royal Marines through the frequent embarkation of the Royal Marine Band Service, though she was also Patron of the RM Association from 1952 until her death and made Prince Philip Captain General Royal Marines on the day of her Coronation.

Above all, aided by the burgeoning jet age, the vessel carried The Queen and her family to parts of the now Commonwealth undreamed of by any previous British monarch – each voyage, each encounter with the indigenous peoples and inhabitants of countries large and small, dignitaries and rulers, each visit recorded for posterity by naval photographers.

Most such visits were joyous occasions, but The Queen has been there for sailors and Royal Marines and their families in darker times. Every time they have gone into action – from Suez to Iraq and Afghanistan – they have done so with words of encouragement and support of their monarch ringing in their ears.

For The Queen never forgot the sacrifices demanded by Service life. Her two eldest sons followed their father into the Service: the future Charles III entered Dartmouth in 1971, his younger brother Andrew in 1979. Charles rose to command a minesweeper, HMS Bronington, and his brother flew in the Falklands in 1982 during a 22-year-career.

The single greatest connection between Her Majesty and the Royal Navy as a formal appointment was her assumption of the Office of Lord High Admiral in 1964, one of the nine Great Offices of State, which enabled the Royal Navy to exist under the royal prerogative. She held the office for nearly half a century, before bestowing it upon on the Duke of Edinburgh to mark his 90th birthday in 2011. The Office reverted to the Crown on his death last year.

It is a role which dates back to the 14th Century and Her Majesty grasped its significance from the outset.

"Every Sovereign since those days has recognised the great responsibility of the Royal Navy as the protector of our island home. The safety of all those who 'pass on the seas upon their lawful occasions' has continued to rest on the broad shoulders of the men and women of the Royal Navy." 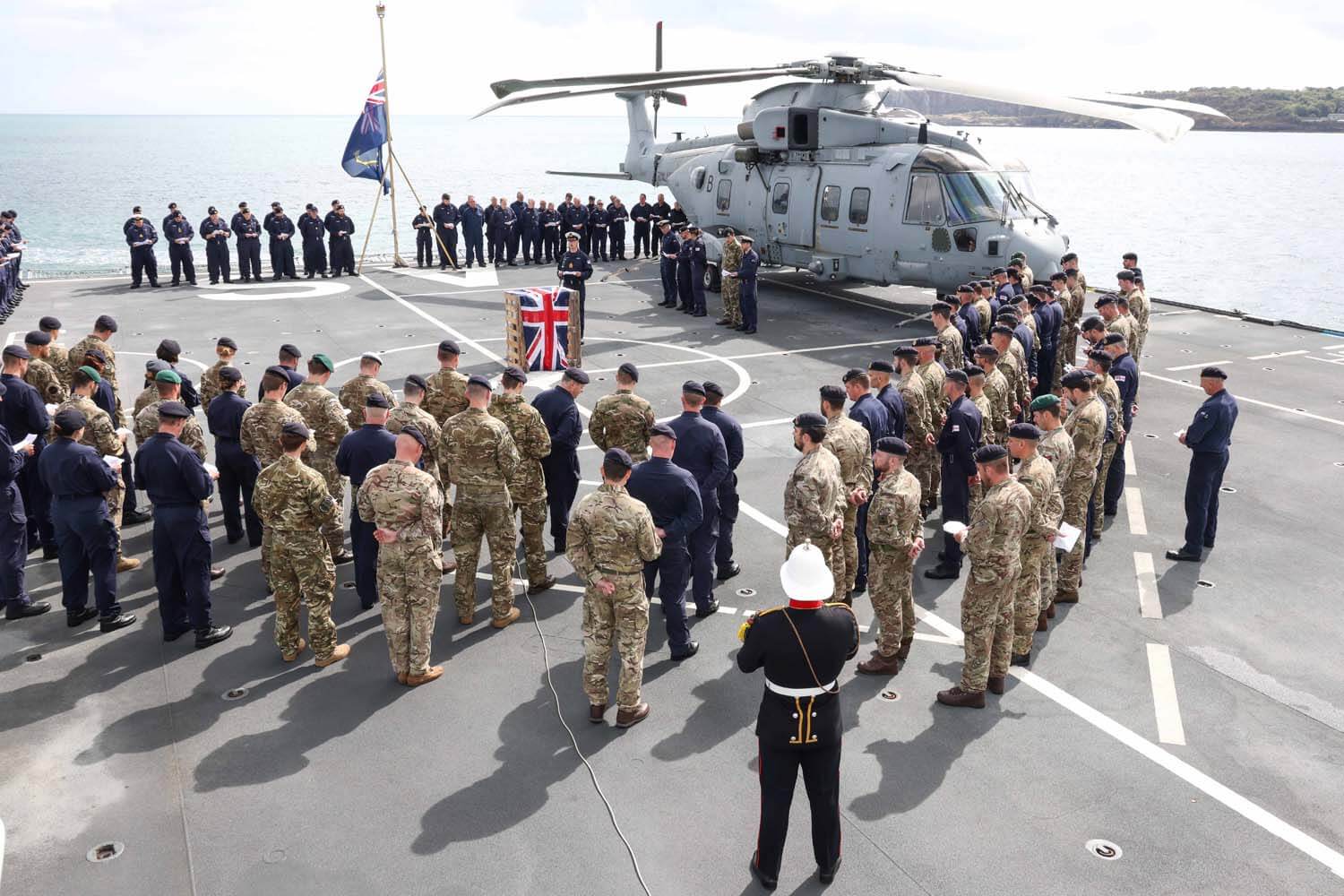 The crew of RFA Argus join in a memorial service for the queen, Septemer 9 (Royal Navy)