In Qingdao, Local Fishermen Set Up Their Own Conservation Patrol

The township of Langye, near Qingdao, lies beside a species rich part of the Yellow Sea. This area is home to the Japanese seahorse and other rare and protected animals like the narrow-ridged finless porpoise.

The Japanese seahorse is a small yellow-brown creature that can easily go unnoticed in a haul of fish. It lives in shallow water coral reefs and seagrass meadows and is threatened by bottom trawling and habitat loss. The International Union for Conservation of Nature (IUCN) lists it as vulnerable. “Initially, the IUCN experts didn’t believe there were still seahorses living there,” said local fisher Liu Shujie. “They were shocked to see a fishing net bring 138 up in only 10 minutes.”

It was not until 2021 that China gave Class II protections to all of the 14 species of seahorses living in its waters. When this particular habitat was identified by IUCN seahorse experts in 2017, no special protections were put in place. Liu took the lead and, in 2019, formed a conservation group with other fishers called the Blue Bay Centre. Together, they protect the area by patrolling in their boats.

If the group’s conservation work is successful and meets the Convention on Biological Diversity’s definition of Other Effective Area-based Conservation Measures (OECM), it could count towards the target of having 30 percent of the world’s land and ocean area protected by 2030. There are hopes that agreement will be reached on this “Thirty by Thirty” target at the CBD talks later this year. However, China has no system for identifying or managing OECMs. There is much work to be done before the country can confirm if and where OECM definitions are being met.

The fishers of the Blue Bay Centre come from a village with a long tradition of fishing. Skills are passed down from generation to generation, and the villagers feel a strong bond with the ocean. Liu Shujie, meanwhile, is a persuasive man. When he heard of fishers overseas getting involved in conservation he leaned on his popularity and authority, and some help from a charity, to get the local fishers organized. 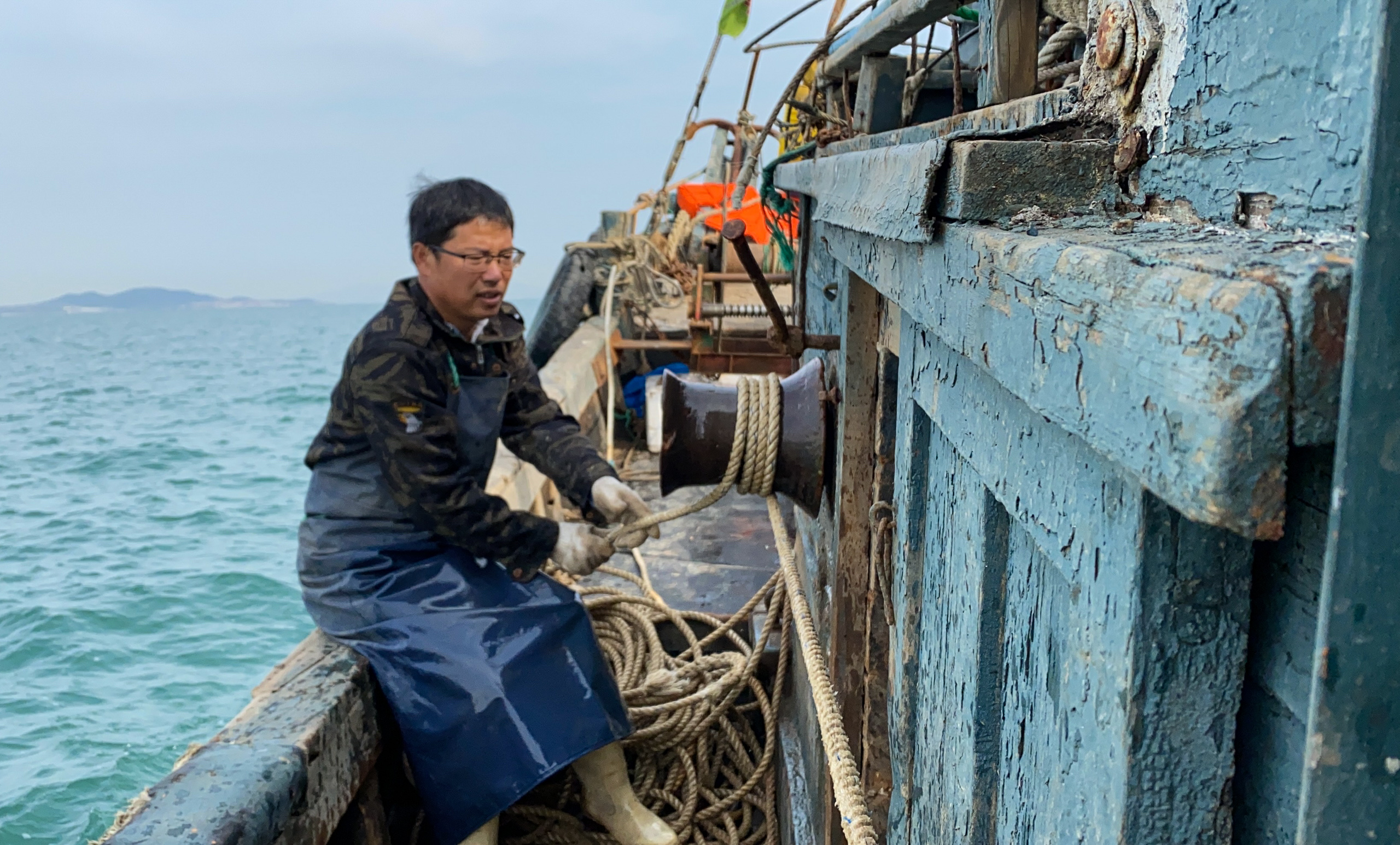 Fisher Liu Shujie set up the Blue Bay Centre to protect the species-rich waters his community have benefitted from for generations (Image: Qingdao Marine Conservation Society)

The captains of over 20 small vessels have joined his team of “blue bay guardians”. They have no law-enforcement powers, but the local marine development bureau has empowered them to dissuade offenders and make reports. The participants take time out from their working day to patrol the area they protect and try to persuade vessels to leave if they employ destructive techniques like bottom trawling. They also report any instances of waste dumping or other harmful actions.

The patrols and publicity work the group carries out make local fishers aware of the importance of protecting seahorses – in stark contrast to the practice of catching and even openly selling seahorses seen elsewhere. Liu says a case involving a seahorse stall at the nearby Rizhao market saw over 20 fishers arrested.

Liu Yi, national coordinator with the United Nations Development Programme (UNDP), said: “As we see the fishers of Langye are enthusiastic about protecting the area, we are supporting them to enhance local capacities, build a sense of pride and recognition for conservation work among fishers, and preserve resources for future generations through charitable projects. We also encourage them to communicate and cooperate with the local authorities and win government recognition.”

In contrast to officially established protected areas, Liu says the community-protected areas the UNDP hopes to encourage fishers to create “aren’t necessarily sealed off and can still be used sustainably, without affecting the traditional fishing practice in the area.” With UNDP support, the Qingdao Marine Conservation Society is helping empower groups like the Blue Bay Centre.

In contrast to protected areas on land, where there is a well-established system of permits for various forms of land use, laws on ocean use by traditional fishers are fuzzy. There are no rules distinguishing between commercial and artisanal fishing, which have left traditional fishers with a “quasi-legal” right to use the sea. So, setting up community-protected areas at sea is very difficult.

Liu explained that community-protected areas should be formed spontaneously by local residents and managed by local consensus, without government approval or financial backing. But official recognition can put the areas on a more formal footing and provide legal support. For example, in 2011 help from the UNDP’s EU–China Biodiversity Programme saw Guangxi province produce rules for community management of forest and wild animal reserves. This allowed community-managed reserves to register with the forestry authorities and gain government recognition.

There are hopes that the area of ocean protected by the Blue Bay Centre will be recognized as an OECM.

OECMs are not a new concept. In 2010, the Aichi biodiversity targets included them in its goals, although it was not until 2018 that a CBD conference agreed on a definition. The following year saw the publication of guidance on recognising and reporting on OECMs, as well as a database of them. Only then did it become practical to include OECMs when accounting for progress toward the Aichi targets.

According to the CBD’s definition, OECMs are “a geographically defined area other than a protected area, which is governed and managed in ways that achieve positive and sustained long-term outcomes for the in situ conservation of biodiversity, with associated ecosystem functions and services”. There are differences in terms of definition, starting point and aims between OECMs and community-protected areas. But internationally, community-protected areas are regarded as a type of OECM.

Community-protected areas emphasize the interests of local communities and indigenous populations, which take the lead in conservation. Wang Songlin, president of the Qingdao Marine Conservation Society, said his organization has been helping the Blue Bay Centre explore ways to both protect nearby coastal biodiversity and develop the local economy through small-scale artisanal fishing since 2021. Its work has been funded by the UNDP and the Zhilan Foundation. If successful, this will be a valuable example of a Chinese marine OECM.

Wang said the political resistance to setting up formal reserves in traditional coastal fishing grounds, which would include strict bans on human activity in core areas, is too strong. Local fishing communities object, while governments at all levels do not want to see constraints on the various ways those waters are used. By contrast, there is huge potential for OECMs managed by local artisan fishers. These would increase consensus among various stakeholders on marine biodiversity conservation and the stewardship of fishery resources, and make joint efforts possible. Liu Yi thinks that OECMs will be more diverse in terms of who runs things, the methods used and the sources of funding. They may even be cheaper while achieving better outcomes.

Setting up OECMs would also be significant for China’s goals on biodiversity conservation.

The Convention on Biological Diversity’s COP15 meeting will be held in Montreal at the end of the year. A draft of its post-2020 global biodiversity framework has called for 30 percent of both land and sea areas to be protected by 2030, but formal reserves alone are unlikely to achieve this Thirty by Thirty target. Lü Zhi, a professor at Peking University’s School of Life Sciences and Institute of Ecology and founder of the Shanshui Conservation Centre, wrote in late 2021 that China needs a system to certify and support OECMs to help meet that goal.

At the end of 2019, China had 271 marine protected areas covering 124,000 square kilometres – 4.1 percent of China’s total jurisdictional waters. There is a gap between those figures, the 2021 global average of 7.92 percent, and the 11th Aichi Target of having 10 percent of coastal and marine areas protected.

According to Liu Yi, providing policy, legislative, financial and technical support for in-situ conservation such as that practiced by the Blue Bay Centre, and recognizing the protected area as an OECM, will help China implement the Convention on Biological Diversity.

How far to true OECMs?

The centre needs that support in order to manage the sea area it patrols “effectively”.

Funding is a real headache. Liu Shujie explained that a patrol takes at least an hour – or about 350 yuan ($50) in fuel and labor costs. More time is then spent filling in patrol logs, recording what was found and how it was dealt with. “We’ve got two huge piles of patrol logs already, and we’ve dealt with around 1,000 vessels,” he said. The funding they’ve been able to get from Chinese NGOs doesn’t come close to covering their costs.

They would also like to have an office, to make things a little more “formal”. But they don’t have the money to rent one, and for now are unable to apply for government funding.

Wang Songlin explained that the Blue Bay Centre is still a voluntary undertaking, with no legal status or policy backing. And the area it protects is still a busy fishing ground and source of livelihood for local fishing communities, the different types of fishing here represent different threats to both protected species and commercially fished species. There is still a huge need for more scientific and sustainable management of the area.

The Qingdao Marine Conservation Society is currently working with charitable and academic institutions to try and help the Blue Bay Centre define the boundaries of the protected area, improve the quality of the patrols and their data-gathering, and look for legal and regulatory support for community-protected OECMs. It is also continually looking at the feasibility of more selective fishing methods and ways to reduce damage to the seabed, rare and endangered species, juvenile fish and smaller fish populations. These are practical approaches based on science, technology and policy, which will help governments at all levels more effectively guide the delineation, management and expansion of marine OECMs. 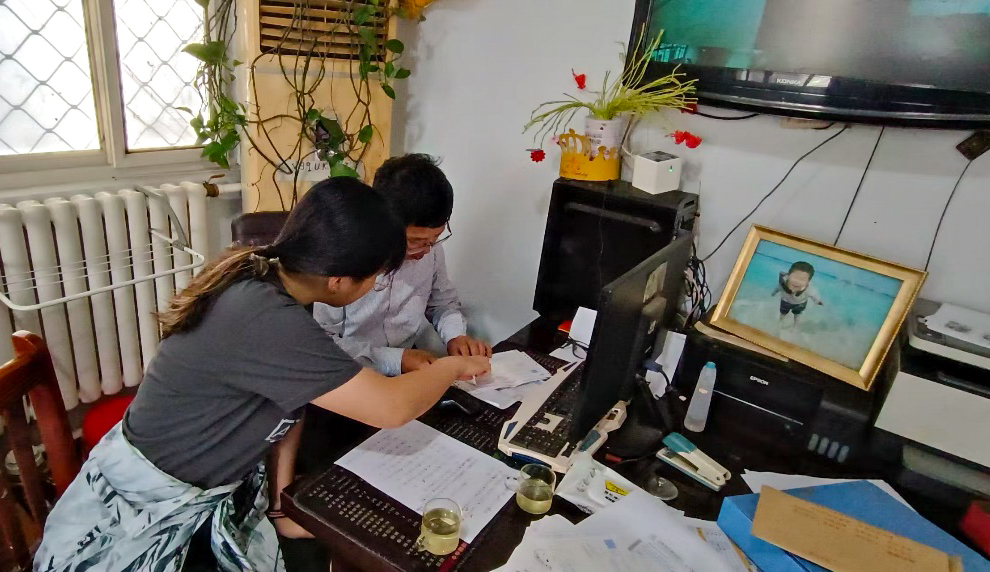 An OECM system of China’s own

Of course, if this or any other community-protected area is to be recognized as an OECM, China will need a system for doing so.

“Current documents providing guidance on OECMs are based on those found in North America or Europe, and so might not be suitable for use in China,” wrote Jin Tong, science director of The Nature Conservancy’s China Program, and others in a paper published earlier this year. Chinese researchers have only started to consider this issue in the last two years, acccording to the paper, and experts disagree on which areas should be recognised as OECMs. The paper states that China still has much work to do: setting up guidelines for assessing, identifying and managing OECMs, putting incentives in place, and creating databases.

Experts are in general agreement that China has a lot of land and sea areas suitable for OECMs. Liu Yi suggests that community-protected areas, ecological forest areas, water source protection areas, natural forest protection projects, ecological redline zones, and even rewilded urban green areas and wetlands, could be included. In their papers, Jin Tong and Lü Zhi make similar suggestions. “There’s already a good foundation for OECMs in China, but they need to be officially recognized, with policy and financial support,” said Lü Zhi.

Zhou Chen is a veteran environmental journalist, previously with Caixin Media and the Paper. She currently lives in Vancouver, Canada and is the Climate Justice Reporter at Ricochet.