Crude tanker freight rates are expected to decline further in 2018 following a sharp decline in 2017, according to the latest edition of the Tanker Forecaster, published by global shipping consultancy Drewry.

Although tonnage supply growth in the crude tanker market is expected to be low next year after surging in 2017, this will not be enough to push tonnage utilization rates higher, as demand growth is expected to be sluggish. A slowdown in global oil demand growth and a likely decline in China’s stocking activity will keep growth in the crude oil trade moderate next year.

After a sharp decline in 2016, freight rates in the crude tanker market have declined further this year despite strong tonnage demand growth in these two years, thanks to a surge in tonnage supply. Fleet growth is expected to come down to 3.2 percent in 2018, after increasing by close to six percent each year in 2016 and 2017. However, this is unlikely to provide any respite to owners as rates will continue to decline in 2018 on account of a slowdown in crude oil trade growth as global oil demand growth is expected to fall to 1.4 mbpd in 2018 from 1.6 mbpd in 2017. 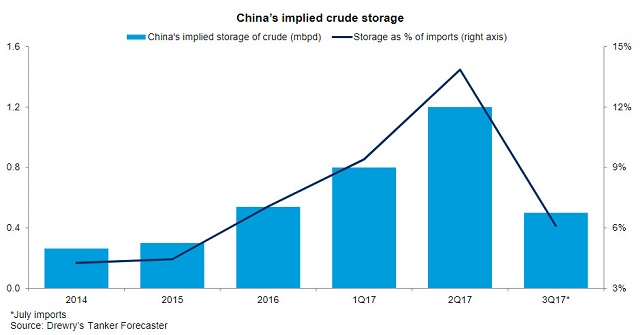 According to the IEA’s data on China’s implied stock changes, the country should have accumulated close to 520 million barrels since 2015, well above the total special petroleum reserve (SPR) capacity that was supposed to fully come online by 2020. A sharp decline in stocking activity in the third quarter of this year to 0.5 mbpd from 1.2 mbpd in the second quarter suggests that the industry might see a significant decrease in the inventory build-up by China in 2018.

“We expect China’s stocking activity to decline to 0.25 mbpd in 2018 from an average 0.75 mbpd in 2017, curbing global trade growth,” commented Rajesh Verma, Drewry’s lead analyst for tanker shipping. “The anticipated decline in China’s stocking activity added to a slowdown in worldwide oil demand will keep global crude oil trade growth modest in 2018, which in turn will keep rates under pressure despite some slowdown in fleet growth,” said Verma.