The WSF 2040 Long Range Plan calls for the construction of five new Olympic Class ferries with hybrid-electric propulsion and high capacity energy storage systems at various terminals in the near term. The 2019 Legislature approved initial funding for the first of the new vessels, with delivery scheduled in 2023. The new vessels are needed to replace aging vessels in the current fleet.

“This landmark project supports Washington State’s goal for 2050 to reduce emissions by 57.5 percent below the emissions level in 2019,” said Jay Hebert, Vice President – Marine Fabrication, Vigor. “Vigor is delighted to partner with ABB in this remarkable work prompted by the commitment of Washington Governor Jay Inslee, the state Legislature and Washington State Ferries to replace aging ferries with clean technology in alignment with the state’s commitment to environmental stewardship.” 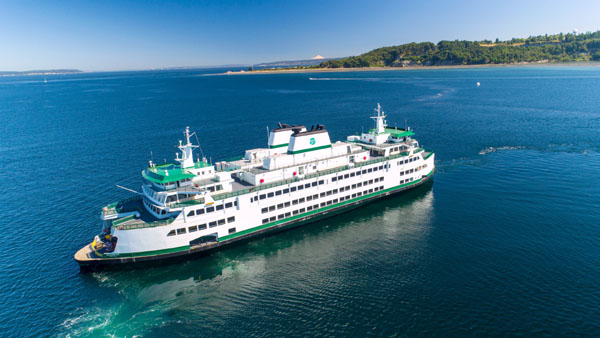 The new vessels, with a capacity of 144 cars and 1,500 passengers, with the planned addition of charging capability at terminals, would reduce fuel consumption by up to 95 percent.

Vigor builds WSF ferries at its Harbor Island shipyard in Seattle. In addition to environmental and transportation benefits, construction of new ferries generates family-wage jobs and other positive economic impacts. Each ferry build produces up to 560 direct jobs and a total of 1,300 direct, indirect and induced jobs, and the state’s Office of Financial Management has calculated that each $75 million invested in ferries produces $90 million in economic activity.

By 2040, the WSF plan calls for replacing 13 existing diesel ferries with new hybrid-electric ferries and converting six vessels to plug-in hybrid, as well as placing recharging capacity at many WSF terminals. Hybrid vessels would be capable of charging at the terminal, and some vessels would be able to operate in fully electric mode on shorter routes. The plan indicates that if all the new vessels and upgrades it calls for are realized, carbon dioxide emissions could be below the 2050 reduction target by 2034.

Leveraging ABB’s Onboard DC Grid™ power distribution system and proven drive technology, the new ferry design will optimize energy use, whether drawing on main engine power, battery power or a combination of the two. The battery power can also extend zero-emissions capability along the supply chain by using renewables and hydroelectric power.

“Moving toward a dramatically reduced-emission future relies on technologies that meet the environmental and cost needs of today – and offer flexibility to integrate future energy sources in the years ahead,” said Juha Koskela, Managing Director, ABB Marine & Ports. “ABB is delighted to support this milestone project demonstrating the way that electric, digital and connected solutions can deliver shipping’s zero-emission future.”