Ten students from the New Orleans Military and Maritime Academy (NOMMA) have embarked on a 17-day voyage aboard the sailing training ship Picton Castle. These students are on a maritime career track, and have already begun maritime training at NOMMA. They departed Galveston, TX on Monday, April 9 and sailed to Pensacola, FL before returning to their home city of New Orleans on Thursday, April 19.

Picton Castle is a 179-foot, three-masted barque rigged ship based in Lunenburg, Nova Scotia, Canada. Picton Castle has a long history of teaching the fundamentals of seamanship aboard a traditionally rigged sailing vessel. Everyone who joins the ship takes part in the ship's operations. Trainees are involved in sail handling, scrubbing the decks, navigating the ship, and assisting in the galley. If trainees choose to they have the chance to climb Picton Castle’s 100 ft. mast to take in and let out the sails.

This opportunity gives the students of NOMMA a hands-on learning opportunity that will begin their development as safe and competent mariners. NOMMA students have been working with the Delgado Community College Maritime and Industrial Training Center to take courses for their Standards of Training, Certification & Watchkeeping certifications, known in the industry as STCW, an internationally recognized maritime certification. During their time on Picton Castle, students will work alongside the professional crew as they are taught skills in seamanship, watchstanding and navigation, while receiving supplemental instruction from the captain, crew, and a NOMMA faculty member who is accompanying the students on this trip.

Tall Ships America, based in Newport, RI, has also provided scholarship funds to help offset the costs of the voyage. Tall Ships America continues its memorandum of understanding with the US Maritime Administration to assist in the development of the maritime workforce. The partnership developed through the introduction of Tall Ships America to Delgado, who then brought NOMMA into the program. The three organizations worked together to establish program goals, dates, costs, and find a vessel (Picton Castle) that was capable and willing to undertake the program.

Bert Rogers, executive director of Tall Ships America said, “Bringing tall ships to New Orleans is a fitting way to celebrate this city’s 300th year as a vital maritime hub for world commerce and culture.” Rogers continued, “Beyond the celebration, we are especially pleased to be working with NOMMA and Delgado Community College to provide high school students from New Orleans with the opportunity to sail, learn and train aboard the tall ship Picton Castle. Maritime nations around the world have maintained sailing ships for professional maritime training, even as mechanically propelled ships displaced the windjammers of old. There is no better way to learn and internalize the lessons of seafaring than to apprentice under sail in a proper ship, where the challenges of the sea build strong character, teamwork, confidence, and competency--essential traits for mariners and citizens alike.” 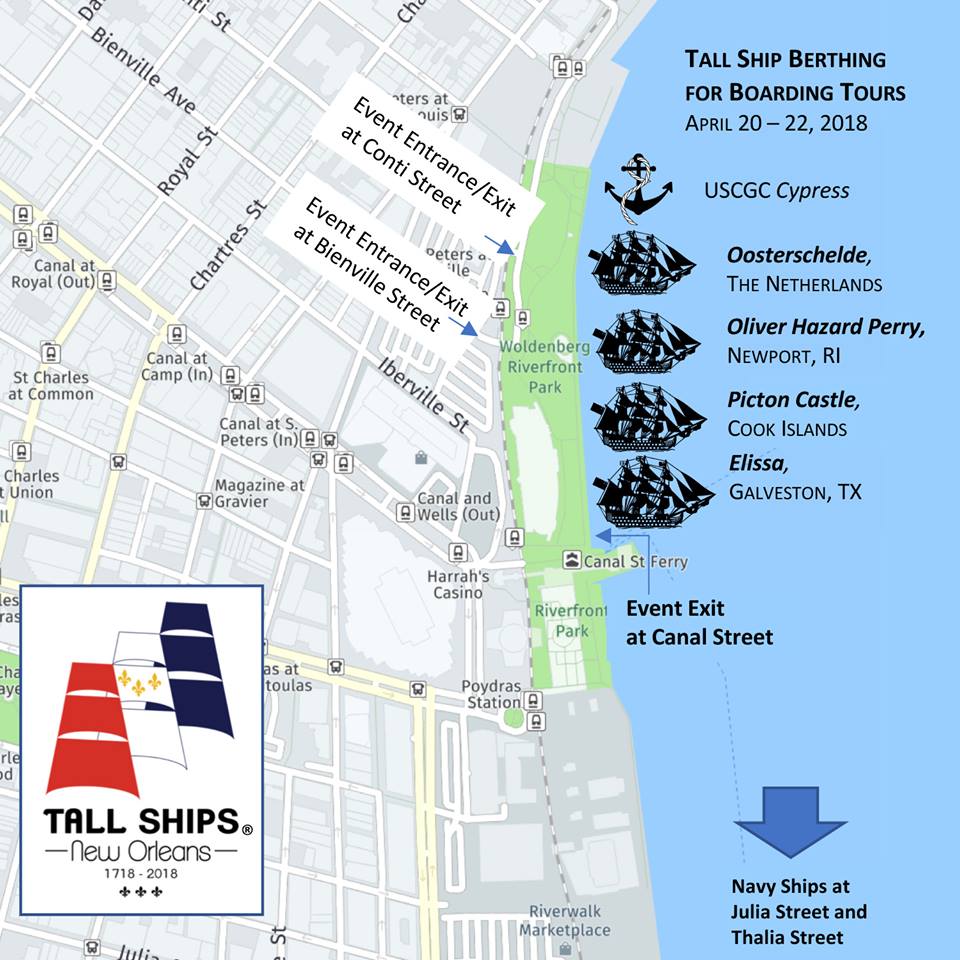 Rick A. Schwab, senior director, Delgado Community College Maritime and Industrial Training Center, said, “We are very excited that the Delgado Maritime and Industrial Training Center could connect to both NOMMA and Tall Ships America to provide this once-in-a lifetime opportunity for the cadets that will be sailing. Moving forward, as we seek designation as a Maritime Center of Excellence, the intent is to provide many more outreach programs such as this. Our ultimate goal is to extend outreach to high schools and further our mission of introducing students to the opportunities and promise of a career in the maritime industry. We are grateful for our partnership with Bert Rogers, Alex Agnew and the Tall Ships Association for helping the visions of this Maritime Center become a reality.”

This voyage is part of the TALL SHIPS CHALLENGE® 2018 Gulf Coast. Picton Castle is with a fleet of tall ships sailing to ports of Galveston, TX, Pensacola, FL and New Orleans. The NOMMA students joined Picton Castle on April 8 and will arrive in New Orleans on April 19. From New Orleans, Picton Castle will begin her seventh world voyage on April 23.