Coast Guard Cutter Bernard C. Webber may spend most of its days patrolling the warm waters of the Florida Straits and the Caribbean, but a little bit of New England is always with it, in spirit and in substance.

Bernard C. Webber was a Coast Guardsman and lifelong New Englander, who, with three other crewmen, heroically rescued the crew of the SS Pendleton when it was caught in a violent storm back in 1952. The ship broke apart and sank off the coast of Cape Cod, a story that would later be captured in the 2016 historical drama, The Finest Hours. Another somewhat less dramatic connection to New England is the installation of tankless water heaters on the Webber, which were manufactured by Hubbell, a water heater company located in Stratford, CT.

Hubbell is proud to have its marine-grade MTX electric tankless water heaters selected for service aboard the 154-foot Sentinel-class cutter, the first of 58 fast response cutters (FRCs) to be commissioned as part of a $21 billion-plus program to modernize the Coast Guard’s at-sea capability. Hubbell MTX heaters were selected for all 58 FRCs, approximately half of which have been built so far by Bollinger Shipyards.

Four MTX heaters were selected for the Webber to provide hot water for laundry, sinks, showers, and galley (kitchen) service. The lightweight, wall-mounted heaters are installed in berthing (sleeping) areas, the laundry room, and the ship’s office.

Built for speed, Coast Guard FRCs are small ships with little room to spare for mechanical equipment. Storage type water heaters not only take up space, they add weight to a vessel that is intended to get where it is needed, fast. The instantaneous hot water delivery of the MTX units eliminates the need for heavy storage tanks, while also reducing standby heat loss. Each heater has its own electronic temperature controller which continuously processes flow and temperature data, modulating the industrial grade heating elements in increments of 0 to 100%, using only as much power as is needed at any given time. Extremely durable, MTX heaters typically have a service life of 20 years or more. 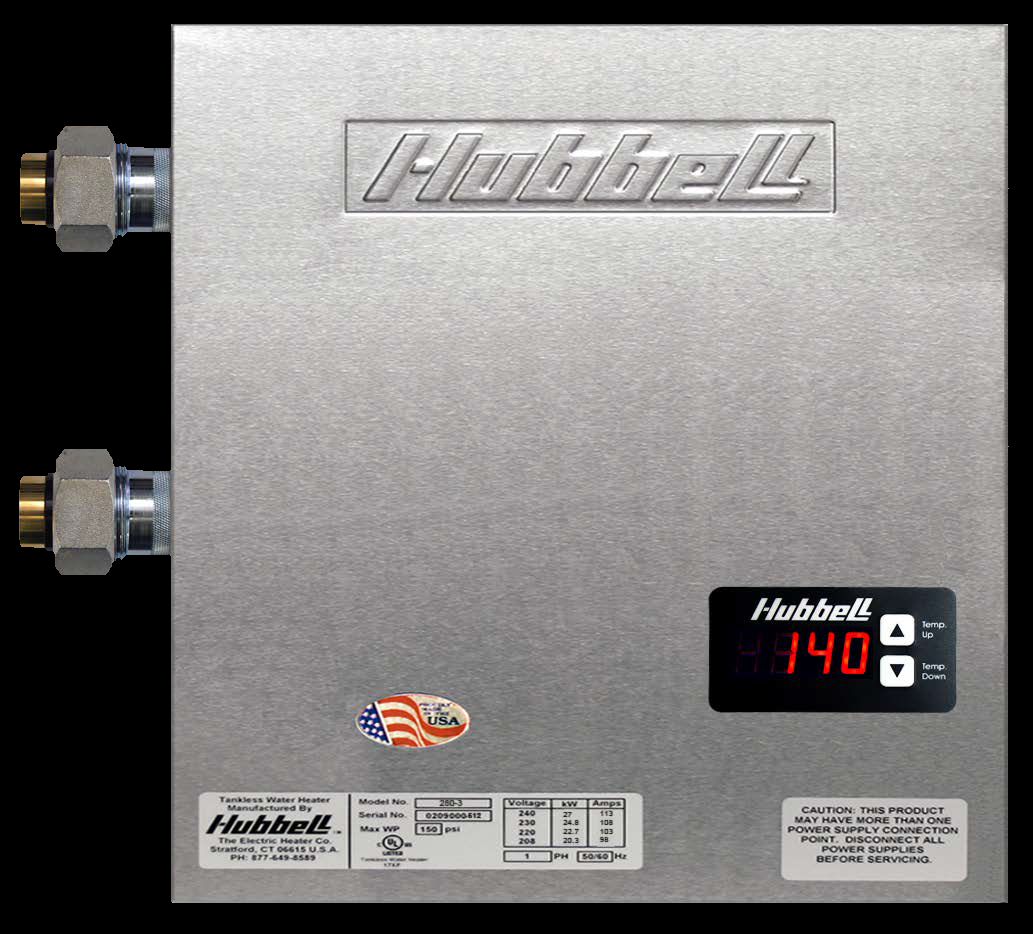 Mechanical equipment aboard any Coast Guard vessel must meet strict standards set by the American Bureau of Shipping (ABS), as well as a separate set of US Coast Guard standards. In general, equipment specified for use on any marine vessel must pass rigorous third-party testing.These include tests that mimic the harsh environmental conditions of the sea. Hubbell has worked with top shipbuilders that serve military and commercial markets and has developed a full line of marine grade water heaters that also meet the standards of these industries.

While ships like the Webber may lack space, one thing they do have plenty of is electricity. An onboard generator provides a surplus of electricity that can be efficiently used to power all manner of onboard equipment, including water heaters.

“The lack of space and the abundance of energy make electric tankless heaters perfect for this type of application. And the on-demand nature is quite nice because it means the ship never runs out of hot water,” said Lieutenant James Ellsworth, who commanded the Webber from July 2015 to July 2017. Ellsworth, who was born and raised in Connecticut, appreciates the fact that the water heaters were built in a factory not far from where he grew up.

Since the commissioning of the Webber, Hubbell MTX water heaters have or will be installed on subsequent FRCs that are part of the Coast Guard’s modernization program. The on-demand hot water is a well-deserved luxury for the service men and women aboard these ships. Patrol duty on an FRC can be quite grueling, with the ship at sea for three to five days at a time, and onboard stints for the crews lasting a month or more. The rescue missions as well as drug and illegal migrant law enforcement duties can also be quite stressful.

“These ships play such a vital role in our country’s security and the life and safety of so many. It’s thrilling to know that our heaters are helping to provide some degree of comfort to the men and women who serve on them,” said Scott Barry, Marketing Director for Hubbell.

While Mr. Barry is well-aware that Hubbell has years of experience providing water heaters for both Coast Guard and Navy vessels, he did not know about the Bernard C. Webber until a rather serendipitous meeting with an account executive for ThomasNet.com, publisher of a vast product sourcing and supplier resource for commercial and industrial applications.

David Ellsworth, owner of The D. Ellsworth Group, which represents ThomasNet.com in Connecticut, was meeting with Barry for the first time regarding advertising when the subject of Hubbell maritime applications came up. It didn’t take him long to realize that Hubbell water heaters were aboard the same Coast Guard ship once commanded by his very own son, Lieutenant James Ellsworth.

“I think anyone in the business of supplying mechanical equipment for a wide range of applications can identify with these ‘It’s a small world,’ moments. This instance was extra special in that there was a father-son connection as well as a multi-faceted New England connection, all of which was pretty cool,” said Mr. Barry.