Cox Powertrain’s high-powered diesel outboard continues to make a big impression, with customers participating in global demonstrations of the CXO300. The innovative outboard first took to the water at Seawork International, UK, in June and the latest feedback comes from Cox Sweden distributor, Diesel Power AB, who recently completed the Swedish rounds of demonstrations at Sweboat’s Marstrand Boat Show and at Sweden’s largest in-water boat show, All at Sea, in Gustavsberg. 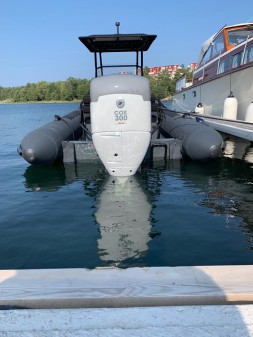 Throughout the two events, Diesel Power showcased the impressive performance and unrivalled capabilities of the CXO300. Demos took place on a Rupert R8, a highly popular and rugged commercial grade RIB designed for heavy professional use in harsh environments, typical of this region.

Sweden is a key sales target for Cox’s high-performing engine as a large proportion of this market comprises professional users such as the navy, maritime rescue and coastguard, who traditionally use fast response planing vessels that undergo heavy use and long operations.

The Diesel Power and Cox teams were overwhelmed at the feedback from those that participated in the Swedish demos. Many commented on the surprisingly low sound level and said that they could clearly tell that the engine has lots of torque. That was despite the demo unit being an early pre-series engine which was not optimized for the boat in terms of leg length and gear ratio.

Among those that were overwhelming impressed was a CEO of a leading Scandinavian boat builder, who jumped ashore from the boat saying, “This is fantastic!” Many of the demo customers have expressed ongoing interest, with several placing orders and other asking for quotations.

Peter Nauwerck, CEO of Diesel Power, said: “We could not have wished for a better kick-off for the Cox sales. Our industry colleagues showed a lot of interest in our product, asked questions and participated in demo runs. We look forward to equipping our brand-new demo boat with a serial production engine to be able to optimize the performance of the boat.”

He continued: “The CXO300 is the perfect solution for government agencies such as the navy and coastguard who require a robust and safe engine to carry out long range operations reliably. The demand for high performance diesel outboards has been unprecedented and we only see this trend getting stronger. Diesel powered engines are a big priority for professional applications and we have many customers that have already placed orders for Cox’s high anticipated diesel outboard.”