On Tuesday the 20th of August in the Port of Luleå, Sweden, the most powerful ice-breaking tug of this size, TundRA 3600-H (Hybrid) tug VILJA was christened. About 100 people witnessed as the Board Chair Ms. Birgitta Ahlqvist broke the bottle-shaped ice sculpture specifically made for this event. Some of the speeches had to be cut short due to rapidly melting ice as the crowd was treated with a warm summer day.

This 36-metre tug is yet another significant achievement of Robert Allan Ltd. The hybrid propulsion system and the use of batteries provides the vessel with flexibility and efficiency to perform its task year-round. The tug will be capable of operating entirely on the electrical battery power feeding shaft driven motor generator sets as well as the ship’s load only or by utilizing a single main engine in the hybrid diesel-electrical mode driving both shafts via the same motor generator sets producing a bollard pull of up to 55 tonnes, or by the two main engines in direct diesel-mechanical mode supplemented with available battery boost bringing the total available bollard pull up to 100 tonnes.

During the first year of operation the various operation modes will be fine-tuned to satisfy the operational requirements and the environmental conditions. The ice-breaking capability is 1 metre of ice thickness at 3 knots of vessel speed.

The TundRA 3600-H tug VILJA has the following vessel particulars:

In August 2019, Eastern Shipbuilding Group Inc. launched the RApport 2400 tug C.D. White, a ship-assist / escort tug for E.N. Bisso & Son Inc. of New Orleans LA. The C.D. White was designed by Robert Allan Ltd. and is first of two tugs being built by Eastern to the same design for E.N. Bisso. This design is very similar to the tug Gladys B, delivered in to E.N. Bisso in 2016, with some modifications in order to better accommodate E.N. Bisso operational requirements, regulatory changes and different main machinery. 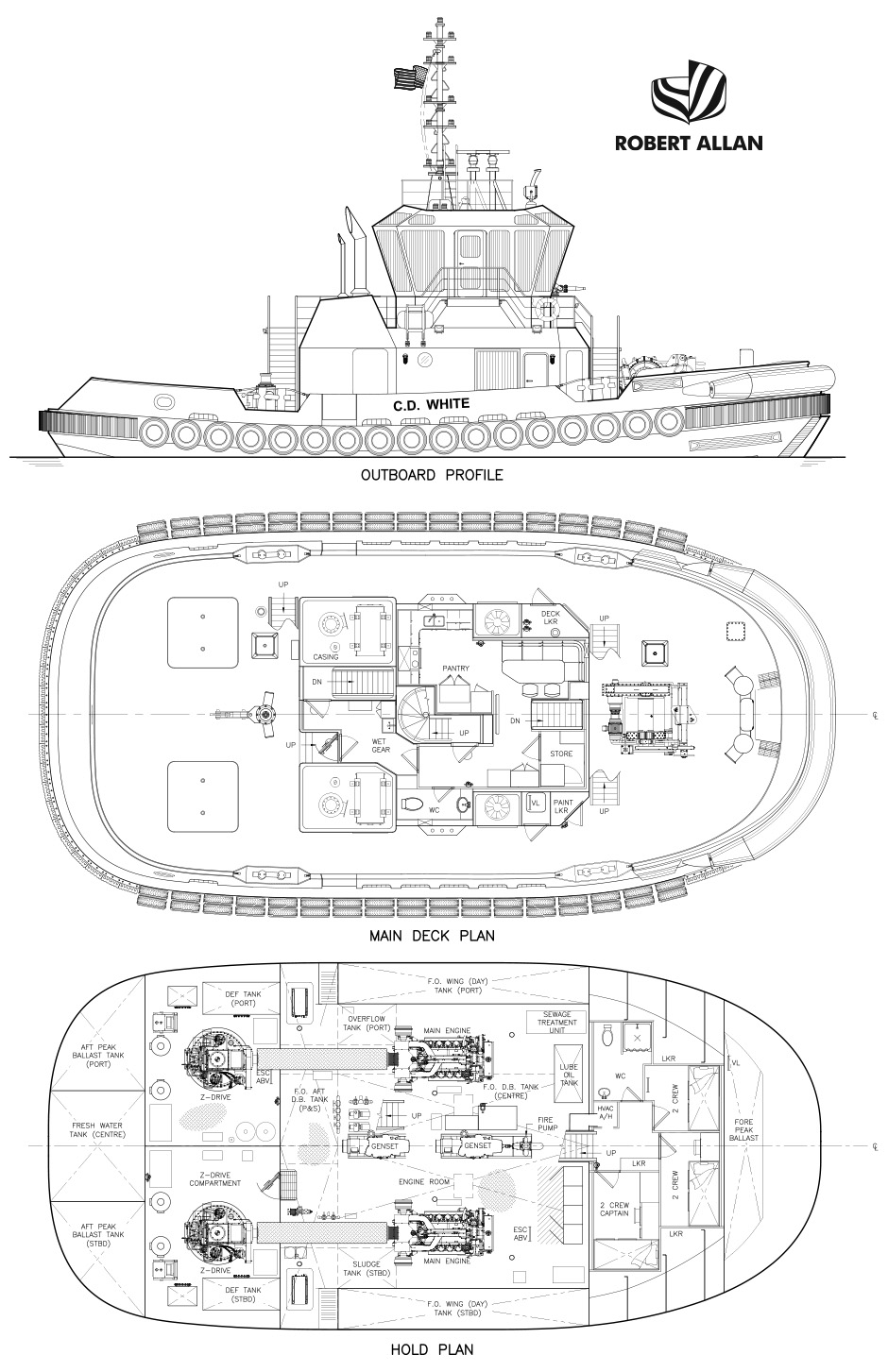 The Particulars of tugboat C.D. White are:

The tug is designed and built to USCG Subchapter M and in accordance with the following class notation but will not be Classed by ABS:

The expected performance of the tug is as follows:

The vessel has been designed to the highest standards of outfitting for an operating crew of up to six. A pantry, mess, store and wet space are located on the main deck and three double berth cabins are located below deck forward.

The tug has been outfitted for safe and efficient performance of escort, ship assist, harbour towing and fire-fighting. The deck machinery comprises a Markey DEPCF-42 HS electric escort winch on the bow, spooled with 500 feet of 8” circumference HMPE line on a single drum, and a tow post with Markey CEPB-40 5 HP capstan and Washington Chain & Supply tow hook provided on the aft deck.

Main propulsion for the tug comprises of a pair of Caterpillar 3512E, EPA Tier 4 certified diesel engines, each rated 2549 bhp at 1800 rpm, and driving a Kongsberg US205 P20 FP Z-drive unit with Ø2500 mm propeller.

The electrical plant consists of two identical John Deere 4045AFM85 diesel generators, each with a power output of 99 ekW packaged by Kennedy Engine Company. The tug is fitted with an off-ship fire-fighting system with a Counterfire ES-125-400 1,500 GPM pump driven off the front PTO of one generator via a Logan clutch.

Ship-handling fenders at the bow consist of one tier of 32” OD x 16” ID cylindrical fenders at the forecastle deck level and 24”x12” M-type fenders below main deck level. The same type M fender is used at the stern and a double strake of 37” diameter tire fenders along the sheer lines of main deck. There is a single strake of 12” hollow “D” submarine fender along the hull side.

Robert Allan Ltd. has completed the design of a new TRAktor 3000-Z escort tug for Bukser og Berging of Lysaker, Norway who have placed an order for two of the vessels with Sanmar Shipyards of Turkey. The design was developed working closely with both Bukser og Berging and Sanmar to arrive at a design achieving not only the Owner’s requirements but also suiting Sanmar’s tug building practice. Bukser og Berging already operates several Robert Allan Ltd. designs and these two new builds will be the 6th and 7th tugs delivered to them by the busy Turkish builder. 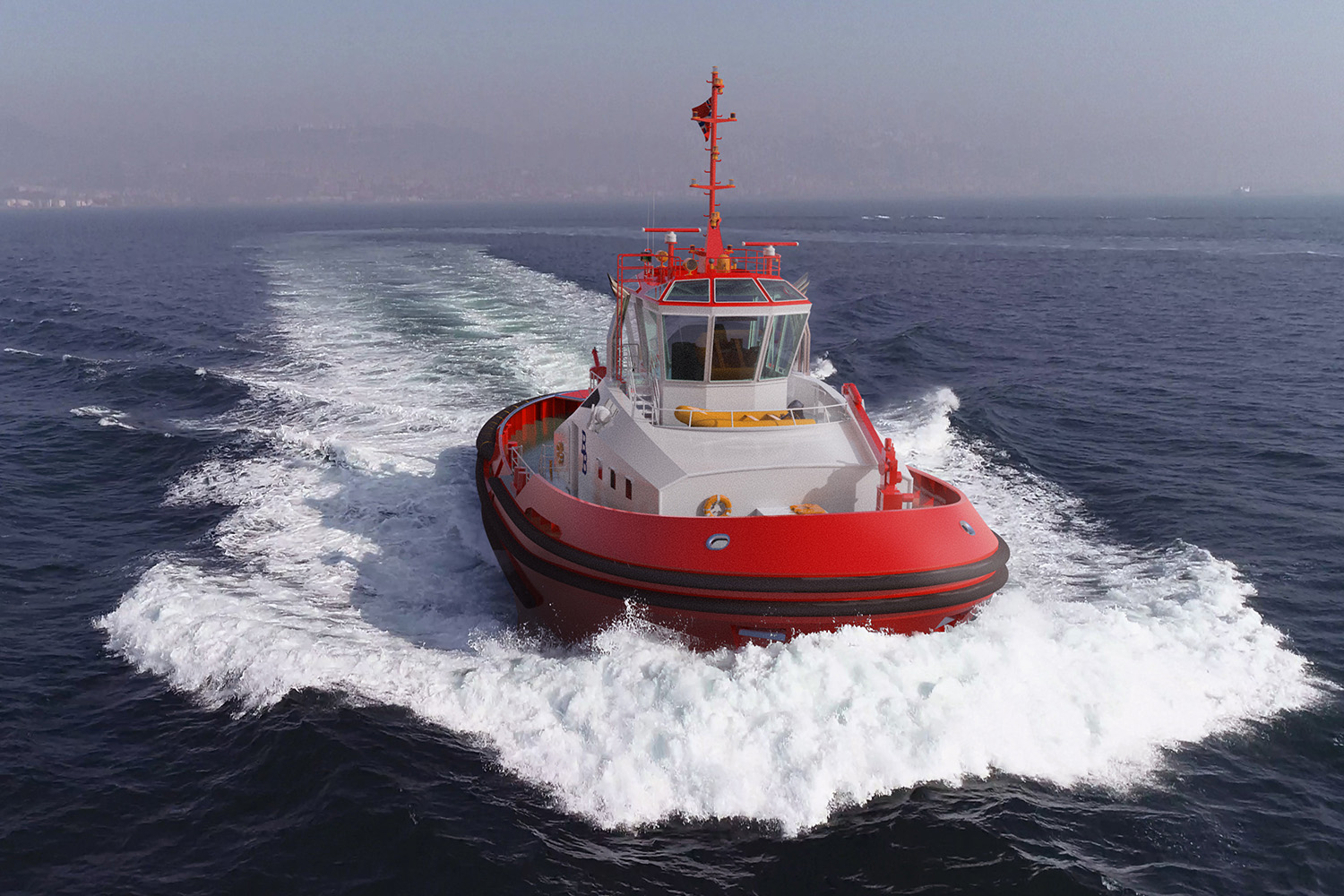 The new tugs will measure 30.45 m long x 12.80 m beam and have a draft with 100 DWT of 6.2 m. Installed power will be with 2 x 2200 kW high speed engines driving CP propellers in an IMO Tier III emissions compliant installation.

The tugs will have a bollard pull of approximately 75 tonnes and be capable of generating a steering force in excess of 80 tonnes and be in full compliance with Class and upcoming IMO escort stability criteria.

The tugs will operate skeg/stern first the vast majority of the time. Accordingly, visibility over the stern has been optimized and the stern of the hull is ice strengthened for operations in light ice conditions.

The accommodations are designed for a normal operating crew of up to 7 personnel. The Master and Chief Engineer cabins are located on the main deck with a single and two double crew cabins located in the lower accommodations.

The first of the two new tugs is scheduled for delivery in the Fall of 2020.