Human Rights at Sea Intern, Daniel Shepherd, is a member of the Sea-Watch crew. The vessel is working in the Mediterranean assisting with the rescue of migrants:

I recently visited the reception center on the island of Lampedusa. Overseen by the Italian Ministry of Interior, the reception center temporarily accommodates migrant people who arrive on the Island after been rescued at sea. The center also represents the first stage in the official asylum application process for those individuals seeking international protection in Europe.

Discretely located in a small valley behind the new port, the purpose built center is completely hidden from view. On arrival I note that the center is a hive of activity with a combination of military and military police guarding the establishment. Legal advisors, doctors, translators and bureaucrats abound. There is even a delegation from Frontex on site. 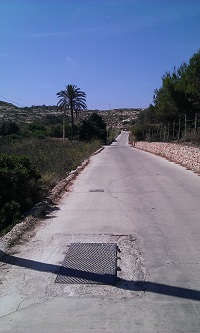 The center functions in a very orderly way with the men segregated from the women, children and minors i.e. those under 18. For the migrant people arriving at the center there is a systematic procedure in place which includes, among others, access to basic legal advice and medical screening. They are then accommodated in one of the various blocks but seemingly free to roam inside their designated area. Two little girls walk past me hand in hand singing songs as I am shown around the facility.

The center has official capacity for 381 persons but during my visit the number was far in excess of this. My guide, a legal adviser at the center, informs me that the figure is more like 700 with another 100 migrant people expected to arrive that evening. Despite the limited space available I am assured that everyone is given a bed and that all cultural particulars are catered for – it was Ramadan so many people were fasting.

I sit down in the shade and my guide asks around to see if anyone would like to have an interview. Five young men express an interest in speaking to me. Below are some brief accounts of their individual circumstances:

Martus and Friday come from the Niger Delta in Nigeria. They have travelled through Benin, Niger Libya and the Mediterranean Sea to get to where they are now. They describe the torturous journey with vivid detail. The Niger desert presented the first major hurdle – a three day car journey through barren desert land with limited food and water.

After arriving in Al Gatroun in southern Libya in late February, the two young men secured temporary work to help fund their next phase of the journey. They describe the working conditions as slave-like. For 50 Libyan Dinars per month (approximately £23) Martus explains the brutality they have to endure from black Libyans. He explains, in an almost surprised tone, the dehumanizing way in which he and Friday are seen and treated by people from their own continent.

From Al Gatroun Martus and Friday head for Tripoli. The journey is again fraught with danger. Not only do the young men endure the capricious threatening behavior of their drivers, they also have to endure the treacherous drive along dirt tracks on the back of a small truck. At unreasonable speeds, their truck takes on the challenge of the desert roads.

Unsurprisingly an accident occurred in which one man from Gambia died and another received severe spinal injuries – there was no medical care available for this man. The women on the truck have additional concerns – they risk being raped by those escorting them through the desert. Martus tells me that he saw one women being raped during the journey.

In Tripoli the two men start to work again. They find jobs at a car wash/garage. In harsh, unclean and unfriendly surroundings they ply their trade in a bid to earn enough money for their boat ride to Europe. Finally, after borrowing an additional 900 Libyan Dinars from a friend, they have enough money to pay the smugglers (it is unclear exactly how much they have spent).

On board a rubber dinghy – or “balloon” as they describe it – with another 108 persons, the vessel is put to sea. Unaccustomed to the sea conditions Martus described the sea sickness with which he suffered. A sense of absolute exhaustion combined with violent episodes of vomiting meant Martus had his head over the side of the vessel for almost the entire time he was on board.

Friday explains that after approximately 13 hours at sea an Italian rescue vessel arrived on scene. Martus simply recalls looking up and, barely being able to open his eyes, seeing the dazzling grandeur of his savior’s vessel.

Usman is a 16 year old boy from the Gambia who speaks good English and Walof – a language of Senegal, the Gambia and Mauritania. He fled the Gambia because of a fear of being persecuted for the actions of his father in the December 30, 2014 coup attempt on President Yahya Jammeh. His father seemingly escaped the authorities but his whereabouts is not known to this day.

Usman travelled through the Gambia, Mali, Burkina Faso, Niger, Libya and the Mediterranean Sea to get to Europe. Although still in touch with his mother and siblings back home, he hopes to start a new life in either Germany, Sweden or the United Kingdom. He longs to play football.

Sulaiman is 21 and comes from Senegal. He speaks French and Walof so Usman helpfully interprets. He was working as a laborer before he embarked on his journey to Europe. He was living with his parents but as the eldest child he was responsible for helping to support the family. In order to do this Sulaiman took the difficult decision to seek work overseas. He explained how hard this decision was given the possibility that he may never see his family again.

Sulaiman also spoke about the frequent rebel attacks he and his community face and the pillaging that takes place during such times. Sulaiman doesn’t mind which European country he goes to, his priority is simply to work and support his family back home.

Davide is 29 and comes from Mali. He speaks French so via Sulaiman and Usman I am able to understand him. He was living with his elderly parents who were no longer in a position to support him. As breadwinner for the family he has taken on the mantle to search for work opportunities outside Mali because of the limited prospects in the country. He intends to remain in Italy and send money home to his family.

It was difficult to empathize with the young men’s circumstances. They were obviously in such a state of desperation to set out on their perilous journeys from West Africa that one can only begin to imagine their institutionalized plight. I wished them well and hoped that they would find what they came to Europe for.