New Technology Promises to Save Marine Species from Bycatch

Hundreds of thousands of marine creatures are killed every year after becoming accidentally tangled in fishing lines and nets. Unlike fish, marine mammals need to surface to breathe, so if they get entangled they drown. Bycatch, as it is known, is one of the most disturbing issues associated with commercial fishing and one of the biggest threats to a number of iconic species.

Modern fishing gear, which is extremely strong and often can’t be seen, is very efficient at catching pretty much anything in its path. As the WWF puts it, “where there is fishing, there is bycatch.”

At least 300,000 dolphins, porpoises and whales, 300,000 seabirds and 250,000 turtles fall victim to bycatch every year. It is the single largest immediate threat to cetaceans, and some marine species are now in such a precarious position they could face extinction unless things change quickly. However, bycatch is largely avoidable.

There are at least 130 bycatch reduction agreements, regulations and legislations worldwide. But progress has been far too slow, and many fishermen are less than enthusiastic about embracing them. A major hurdle to reducing bycatch to date has been the quality of available technology. Devices such as the acoustic pinger – which can reduce the number of dolphins, whales and porpoises caught in nets by up to 95 percent – have existed for decades, but until recently the majority were expensive and impractical.

After 25 years working in the fishing industry and feeling appalled by the state of our oceans, I set out to find a solution. In 2016, I set up Fishtek Marine with my brother, Ben – an environmental engineer. Our mission is to pioneer new marine conservation technology and rapidly improve conservation efforts as a result. We knew we needed to develop products that would work for fishermen and the environment in order to stand any chance of making a difference.

After rapid growth over the last two years, the multi-award winning Fishtek Marine is now crowdfunding, via Triodos Bank, to raise £900,000 of new investment. Our aim is to expand the reach of the products we have already developed and to invest in developing new ones that could have even more of a positive conservation impact (e.g. SharkGuard, OrcaGuard, Turtle NetLights and Ropeless fishing). 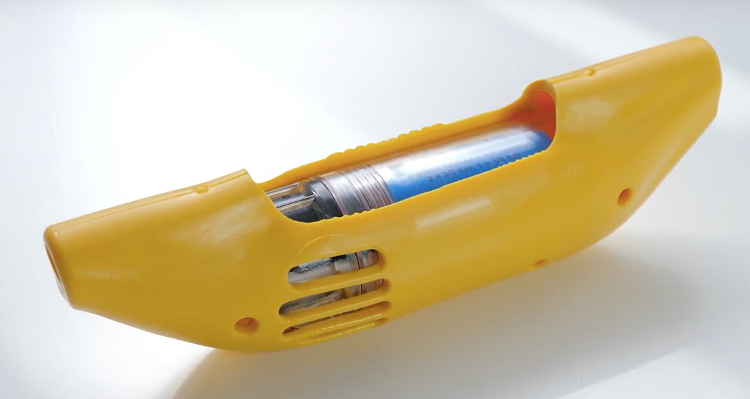 Initially we developed the Banana Pinger, designed to be both effective and affordable. It is robust (able to withstand the harsh conditions of offshore fishing) and easy to attach to the net. The devices can be fitted to gillnets – a wall or curtain of netting that hangs in the water  and can  be four or five meters high and run for tens of kilometers. When porpoises or dolphins are foraging on the seabed they can’t see these nets and so they swim into them, get tangled up and die. Dolphins and porpoises use echolocation to communicate and detect prey so pingers work by sending out a randomized frequency sound sweep every five seconds, which alerts them to the net’s presence, enabling them to avoid it.

By providing a good quality, effective device, our aim is to make it attractive for fishermen to use pingers and to encourage legislators to pick up the pace on strengthening enforcement and implement new laws.

In January 2022, a new law under the Marine Mammal Protection Act (MMPA) will require any country exporting fish to the U.S. to have marine mammal protections equivalent to those in the U.S., including measures against bycatch. The law could influence fishing standards in exporting countries including Canada, Chile, China, Japan and Mexico, with the potential to significantly shake up the industry.

In many fisheries, we believe our technology offers the most effective way for fishers to comply with the new law, taking us from a relatively niche market to a potentially massive global market in couple of years, with the added advantage of huge conservation gain.

We’re working to make commercial fishing more sustainable, but if we’re going to make a real conservation gain we have to have more than just a few hundred devices out there. By definition anything that is successful in terms of global marine conservation has to be effective, practical, have significant commercial uptake and be produced and distributed in large quantities.