Sri Lanka officials conducted a briefing to detail the scope of the environmental damage resulting from the fire and sinking of the containership X-Press Pearl last month. Government representatives and the shipping line continue to refute reports of additional pollution and possible oil leaks from the vessel, which remains partially submerged off Colombo. At the same time, additional international aid is being sent to help the country deal with what has been called the worst environmental disaster in the history of Sri Lanka.

Seeking to address reports that appeared in international media and on the Internet of oil leaking from the vessel, the government officials said divers have continued to inspect the hull and found no breaches in the bunker tanks. They suggested the light sheen and discoloration seen trailing from the vessel is not bunker fuel but possibly oil from the destroyed containers and other debris that fell into the ocean.

A team of international experts from the UK is assisting Sri Lanka and performing tests on the sheen seen drifting away from the vessel to determine its composition. According to the International Tanker Owners' Pollution Federation, which has two representatives in Sri Lanka assisting, no oil pollution has been reported onshore.

After reviewing the manifests from the vessel’s cargo, they are now reporting that it was carrying 193 different items. In addition to the highlighted nitric acid, other chemicals including methanol and sodium hydroxide were among the contents of the containers. More than 800 of the containers were transporting either plastic or polythene, contributing to the reports of widespread plastic pollution in the ocean and washing up.

“The pollutants of particular concern are nurdles (a small plastic pellet used as a raw material in plastic manufacturing), as they have the potential to spread over vast distances, and recovery of these small plastic pellets can be difficult and protracted,” reported ITOPF. They estimate that the extent of the debris has already spread more than 80 miles along the coastline. 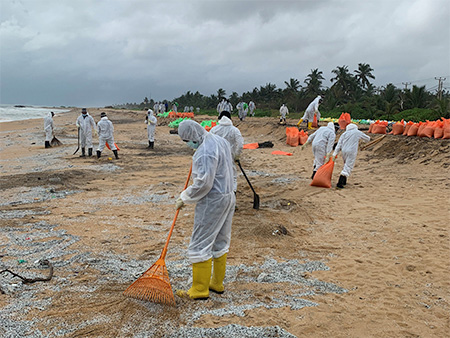 Environmental officials said more than 50 containers of material have been recovered along the beaches. They estimated that each container holds more than 60 tons of debris. At the same time, Sri Lanka’s Central Environmental Authority has instructed the salvage company that the next step should be to recover containers that fell overboard to stop additional pollution.

“A large portion of the plastic that had washed ashore due to the sinking of the ship has now been collected,” Minister of Environment Mahinda Amaraweera said during the briefing. “We do not know how many more were eaten by fish in the ocean. According to the information I have, plastic pallets piled up on the beach have been collected and stored in containers for destruction,” he said.

More distrusting though are the growing reports of fish, turtles, and a dolphin washing up on shore having died after consuming the plastic pellets. As a result, a ban remains in effect for all fishing along the coastline in the affected region.

Seeking to provide immediate aid to the families whose livelihoods were impacted by the emergency, Chargé d’affaires Martin Kelly at the U.S. Embassy in Sri Lanka announced $100,000 in immediate assistance. He said it would be distributed through the U.S. Agency for International Development (USAID)’s implementing partners.

The Minister of Environment predicted that the damage to the environment will last for 20 years. “I say that the damage caused by the sinking of the X-Press Pearl cannot be measured in dollars. This caused a great deal of environmental damage and all those involved in this destruction should be legally punished.”

Sri Lanka is continuing to investigate the disaster, centering on when the chemical leak was discovered. Port and harbor officials contend that they were not properly notified by the ship and its agents. There have also been acquisitions that emails between the containership’s captain and the agent were deleted, causing the Sri Lanka police to order recovery of any missing emails. At the same time, they are continuing to review information from the vessel’s recovered VDR device. 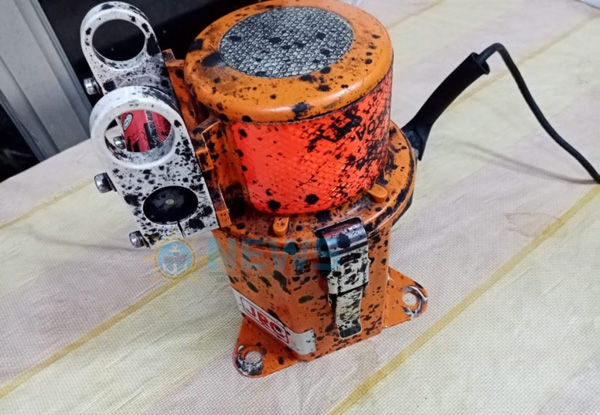