The investigation into the fire and subsequent sinking of the containership X-Press Pearl is proceeding with prosecutors revealing new details on their efforts as well as the extent of the environmental disaster. This comes as the Sri Lankan government is also enlisting the aid of international resources to press the full extent of their claims against the shipowner and its insurers.

Sri Lanka’s Attorney General told the Colombo Magistrate’s Court on June 30 that they were continuing to make progress, but they have encountered some problems in the recovery of data leading up to the vessel’s arrival off Colombo on May 19 and the origins of the fire. Investigators have been centering on the communications between the ship’s captain, the port agents, and the harbormaster.

Deputy Solicitor General Madhawa Tennakoon charged in court that the captain, local representative of the shipping company, and the shipping operator had all concealed the truth about the situation on board the vessel from Sri Lankan authorities. Speaking before the court, the attorney general’s office said that they continue to believe that three representatives of the local agent of the shipping company had deleted all the emails they received from the master of the vessel before its arrival and after the fire was discovered on board.

The master of the vessel, a Russian national Vitaly Tyutkalo was arrested and is being detained in Sri Lanka during the investigation. Lawyers for the shipping company however said in court that the investigation seemed to be one-sided and questioned why individuals from the agents had not been named as suspects.

Detectives working for Sri Lanka’s Criminal Investigation Department are reviewing information taken from the captain’s mobile phone as well as those of the crew and other material from the ship sent to shore. However, they reported to the court that the device for recording ship-to-shore communications at the pilot station in Colombo apparently malfunctioned. They had brought in experts to retrieve the communications, but in a report filed with the court, they said they had been unable to retrieve information from the device. There was no mention, however, if they have been able to recover information from the vessel’s data recorder which was retrieved and brought ashore for review.

The attorney general’s office also provided information to the court on the extent of the environmental damage. They said that a committee of 39 experts had determined after reviewing the carcasses of 200 sea mammals that washed ashore that all the animals died from pollution related to the X-Press Pearl. They said that the cause of death for the 176 sea turtles, 20 dolphins, and four whales was determined to be marine pollution. 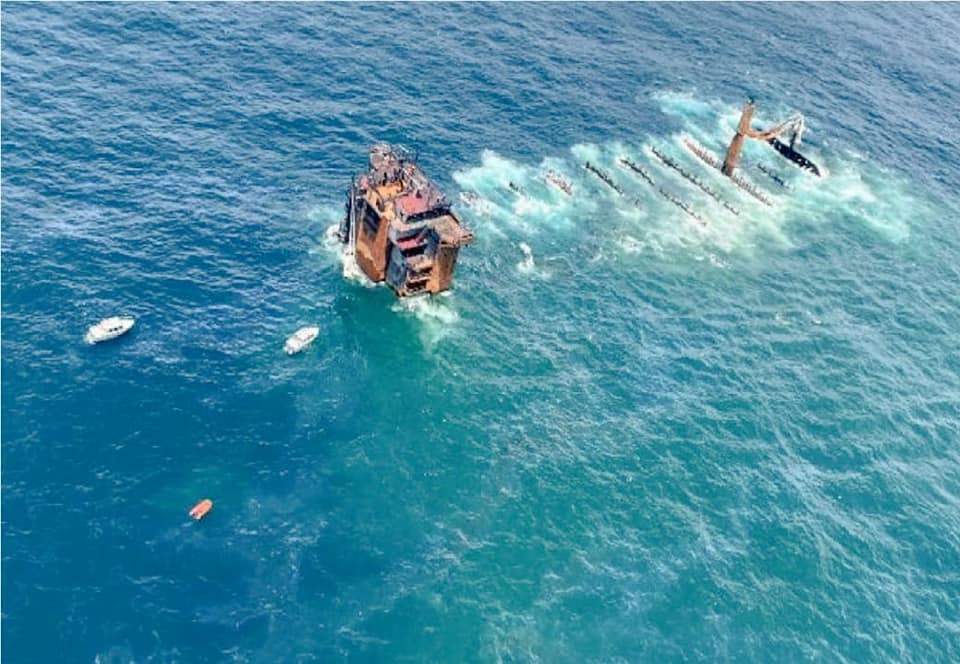 This comes as efforts continue to monitor the hulk, which has settled to the sea bottom in the anchorage off Colombo. X-Press Feeders, operators of the X-Press Pearl, report that caretakers salvors continue to observe a gray sheen emanating from the wreck, but it has lessened. A specialized salvor's tug arrived from Malaysia to take over the caretaker duties and drones have been flown in and will be deployed onsite to help with the ongoing monitoring activities.

The High Commission of India in Colombo also released the results of the Indian Navy’s survey of the wreck site. They detected 54 objects using side-scan sonar and aerial reconnaissance for an area of over 200 miles. X-Press Feeders has determined that there was a total of 81 containers aboard declared as transporting dangerous goods, and they said that they are working with experts so that a plan can be implemented to recover the cargo that has fallen overboard. The owners and their P&I Club will also draw up an Invitation to tender for the removal of the wreck. However, due to the exposed nature of the anchorage to the prevailing South Westerly Monsoon, they cautioned that it is likely that the wreck removal phase will only commence in late 2021, but that caretaker services will remain on site.

The X-Press Pearl insurers, the P&I Club, have reportedly agreed to pay approximately $3.6 million of the initial interim claim of $40 million lodged by Sri Lanka. At the same time, government officials have decided to appoint an international legal firm to pursue their claims. They reported that eight international legal firms with experience in dealing with claims involving such incidents have responded to the government’s requests.

Sri Lanka’s Justice Minister Ali Sabry also announced that he has been in discussions with the Minister of Law for the Republic of Singapore in response to an offer of assistance from the Maritime and Port Authority of Singapore, representing the flag state of the vessel. Their discussions included efforts to reduce the risk of further pollution, a response if oil leaks from the vessel, and further efforts to identify and remove containers and debris on the seafloor.