China’s Jiangnan Shipyard, part of China Shipbuilding (CSSC), completed the construction and delivery of a new gas carrier that is believed to be the largest ethane carrier in the world using the innovative IMO B-type tanks. The vessel, the 60,000 dwt Pacific Ineos Belstaff, is reported to be the first very large ethane carrier with a capacity of 99,000 cubic meters of liquified gas.

The vessel, which is part of the new Panda series being built by Jiangnan, is designed to transport liquified ethane and other gasses over long distances. The vessel features the large B-type tank along with a gas containment system developed by the shipyard. They said the B-type tank offers the advantages of high safety and reliability, long structural life, an efficient insulation system, and low maintenance. The tank is designed to carry a variety of liquified gas cargos, including LPG, ethylene at -104C, and ethane at -89C.  The cargo system also offers flexible loading, no liquid level loading restrictions, and less residual cargo in the tank.

Jiangnan reports that the designs for the new tank were developed from the more mature type A tank but offer significant advantages. At current, the regulations limit the maximum cargo capacity to 100,000 m3. They believe the B-type tank can also be applied to LNG. The shipyard reports it has developed a design for 80,000 m3 LNG ships and 6,000 to 18,500 m3 LNG fuel tanks that could be used on dual-fuel containerships. 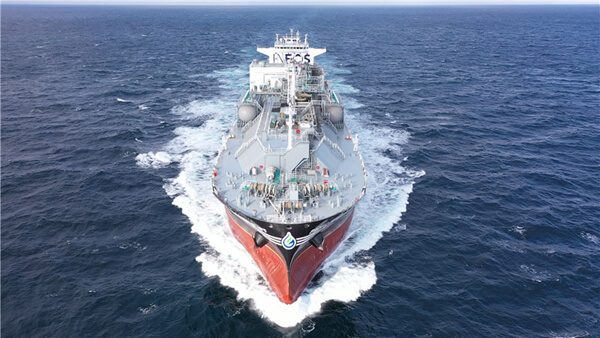 The Pacific Ineos Belstaff was launched in September and delivered to operate under charter to the INEOS Group carrying ethanol from the United States to Antwerp. The vessel is registered in Hong Kong and measures 755 feet in length with a 120-foot beam. The vessel is also fitted with two C-type deck mounted tanks.

The ship also features a hydrodynamic hull design and dual-fuel engines. It can operate on ethane as its fuel through a shaft generator.

Jiangnan Shipbuilding has three additional 99,000 m3 VLECs of the same type under construction for delivery in 2022. They also reported 11 orders for the newly developed 93,000 M3 VLGCs.

In October 2020, Samsung Heavy Industries delivered the Seri Everest, the first in a series of three 98,000 m3 VLECs built for MISC Berhad. A second generation VLEC, The Seri Everest was at the time reported to be the largest vessel of its type.