The world’s largest dual-purpose, LNG supply and bunkering vessel was launched in China. The vessel is part of the ongoing efforts to build the global LNG supply chain. Increasingly, the maritime industry is viewing LNG as a transitional fuel as shipping moves forward with efforts to meet the goals to reduce emissions.

The Avenir Allegiance was launched on January 27, 2021, at Zhoushan Changhong International Shipyard Co. Due for delivery from CIMC Sinopacific Offshore & Engineering Co. in the third quarter of this year, she will be the first 20,000cbm vessel to join the Avenir LNG fleet and the world’s largest LNG bunkering vessel. Previously, the Gas Agility, operated by TOTAL in Northern Europe, claimed the title of the largest LNG bunker vessel with a capacity of 18,600cbm.

“We are delighted to see the latest, and largest, vessel in the Avenir LNG fleet being successfully launched by our partners CIMC SOE,” said Peter Mackey, CEO Avenir LNG. “We look forward to taking delivery of the Avenir Allegiance later this year.”

As the largest LNG bunkering vessel in the world, the Avenir Allegiance will play a critical role in helping the shipping industry to transition to LNG as a more environmentally sustainable fuel. The Allegiance will operate as both an LNG bunkering vessel and an LNG supply vessel. According to the company, this highly flexible design will contribute to the growth of the LNG markets. “We can deliver LNG to a broad range of customers from a single vessel, improving efficiency in the LNG supply chain and ultimately reducing costs to our end-customers.”

The Allegiance will be Cayman Island flagged and the fourth of six newbuilds delivered to Avenir LNG. Avenir’s first newbuild delivery, the Avenir Advantage, took place in October 2020. It will be followed by the Accolade, Aspiration, Allegiance, Ascension, and Achievement, all due for delivery this year. 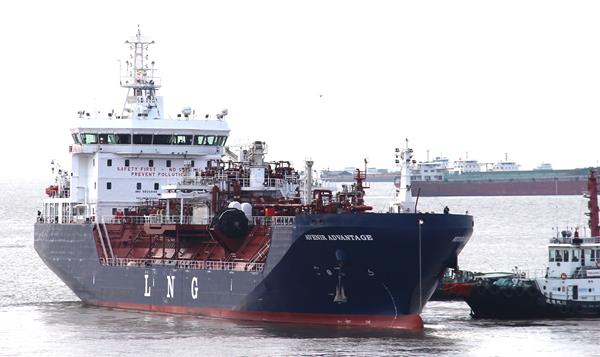 The Avenir fleet consists of three sets of two, with the first two vessels being built by Keppel Singmarine and the later pairs being built by CIMC Sinopacific Offshore & Engineering. The Allegiance and her sister ship will be the largest of the vessels with a length of 525 feet and a beam of 27 feet. Avenir reports they will have a pumping capacity of 2,100cbm per hour. The four other vessels have a capacity of approximately 7,500cbm with a pumping capacity of 1,000cbm per hour. Those vessels have slightly different dimensions with the set coming from Keppel having a length of 405 feet while the second set being built by CIMC is shorter at 380 feet in length. Avenir also has construction options for two of the larger capacity vessels and two of the smaller vessels with CIMC.

Avenir's new bunker ships will be part of the overall global effort to build the LNG supply fleet. The number of vessels available to bunker LNG-fueled ships grew rapidly in 2020. Current estimates are that more than 40 bunker vessels are available with the fleet expected to continue to grow in the coming year.