The Worldwide Ferry Safety Association (WFSA) has announced the winners of its 2017 Competition for the design of a safe and affordable ferry. The awards will be presented on May 11 at WFSA’s upcoming Ferry Safety & Technology Conference in New York.

Students from nine institutions submitted their designs for a 200 passenger ferry for 30 kilometers of the Chao Phraya River in Bangkok Thailand, with the mandate of providing plans for a vessel that is safe, affordable to construct and operate and is appropriate for its intended geographic place. Ferries operated by Chao Phraya Express Boat Company service local commuters as well as promote tourism in the City of Bangkok by allowing tourists to comfortably access the Chao Phraya River to visit temples, local communities, important landmarks, hotels and shopping area along the river.

There were three award winning teams, from University of Liege, from Webb Institute and from the Indian Institute of Technology Kharagpur, first, second and third prize respectively. All these submissions were for aluminum catamarans for stability and fuel efficiency. All had fire detection and suppression equipment.

Dr Roberta Weisbrod, the Executive Director of the WFSA, said: “Urban linear ferries like Bangkok and New York are in growth mode everywhere. The students have garnered useful experience, especially the awardees, in designing for a growing market.”

The extra value to the industry are some interesting and useful approaches by the student teams, she said. 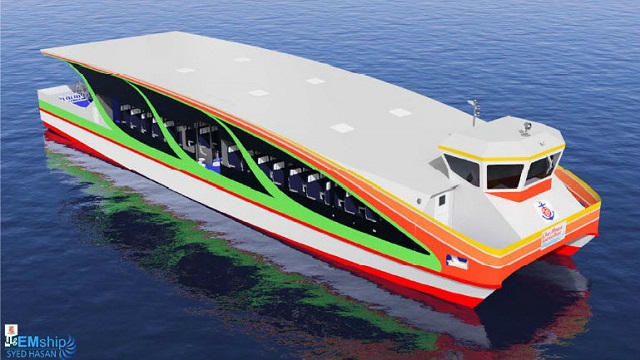 The winning team came from the University of Liege in Belgium's EMShip program led by Faculty Advisor Professor Andre Hage. The student team consisted of Syed Marzan Ul Hasan. The vessel featured a design where the long haul passengers and tourists sit in front where they get the best views, while the short distance commuters are in back where on off access is rapid. In addition, the seating allocation places elderly, physically challenged and pregnant women and people with small children and strollers nearer to the doorways.

This design also considered the night operation of the vessel, typically in the hours up to 10 p.m., with the allround visibility from a raised navigation room and night visibility and signaling arrangements that are essential for safe navigation through the dense waterway. In addition the design includes a quick-retractable mast to ensure compliance the air draft restrictions on the intended route with its many low bridges.

The critical issue of safety of the passengers was addressed by adequate intact/damage stability including compliance with the wind heel criteria and can accommodate the contingency of passenger crowding on one side. Life saving appliances and fire safety features included fire insulation from machinery spaces, fire hose provisions, audible-visual alarms and signals. Emergency fire pump and generator arrangements ensure additional safety. Additionally, free space at the aft position could act as marshaling and rescue area in the event of emergency.

The designer addressed the risk during passenger embarkation and disembarkation due to tight time schedules by provision of foldable ramps for quick but safe movement of the commuters. 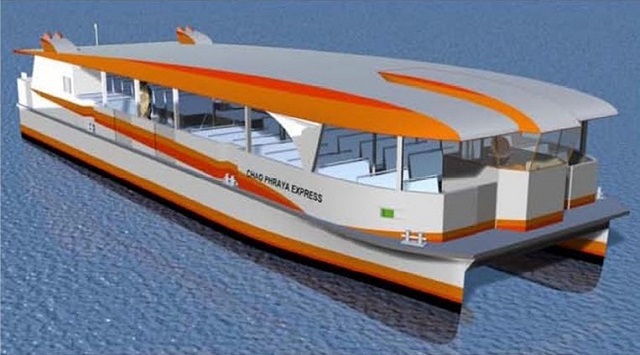 Webb Institute in Glen Cove New York fielded a team consisting of Captain Andrew Vogeler, team members Brandon Louis and Nicholas De Sherbinin, and their advisor Dean Matthew Werner. The team paid particular attention to ensuring passenger safety and operational efficiency in their design. This is shown through the incorporation of redundancy as a core characteristic in various mechanical systems on board the vessel.

This redundancy is achieved by designing the mechanical systems to be operated by one of two machinery spaces in the ship’s demi-hulls. These systems include the fuel oil system, the carbon dioxide fire suppression system, the fire main system, electrical power system and the steering gear control.

The team also designed easy open/removable windows to provide an easy escape from the vessel in the event of a major emergency.

In order to keep the vessel affordable, the hull is comprised of uniplanar curves aimed at reducing manufacturing costs, while still maintaining efficiency and pleasing aesthetics. The team also planned to reduce the overall maintenance cost of vessel through the use of local shipyards and mechanics, as well as
through the use of Cummins engines and generators. The ferry also makes use of a simple interior design, which allows for reduced manufacturing costs when compared to other catamaran ferries.

The team also considered ease of operation by designing a midship loading station which would allow the vessel to be docked at the existing piers. The transverse offset of the propellers relative to centerline increases maneuverability of vessel at low speed operation, while a raised pilothouse and strategic bench placement increases overall pilot visibility. The use of a CCTV system was considered to provide the pilothouse with exterior views of vessel during operation.

The team from Indian Institute of Technology at Kharagpur consisted of the Captain, Saurav Agarwal, with classmates Harshdeep Singh and Rishank Kumar. The faculty advisor is Professor Vishwanath Nagarajan.

Their design for affordability and operational efficiency included considerable attention to the ease of maintenance with simplified access to machinery space and double hull. Efficiency was considered through propulsion optimization due to hull shape and bulbous bow. Safety considerations were paramount, and the team suggested a smart system to detect leakage in the hull, in addition to smoke detection and fire suppression.

Their special innovation for sustainability and operational efficiency was the design of a solar panel installation above the roof of passenger deck for electrical power to minimize diesel consumption.