What Will it Take to Melt Antarctica's Ice?

New work from an international team including Carnegie Institution for Science’s Ken Caldeira demonstrates that the Earth’s remaining fossil fuel resources would be sufficient to melt nearly all of Antarctica if burned, leading to a 50- or 60-meter (160- to 200-foot) rise in sea level.

Because so many major cities are at or near sea level, this would put many highly populated areas where more than a billion people live under water, including New York City and Washington, DC, sates the report published in Science Advances.

“Our findings show that if we do not want to melt Antarctica, we can’t keep taking fossil fuel carbon out of the ground and just dumping it into the atmosphere as CO2 like we’ve been doing,” Caldeira said.  “Most previous studies of Antarctic have focused on loss of the West Antarctic Ice Sheet. Our study demonstrates that burning coal, oil and gas also risks loss of the much larger East Antarctic Ice Sheet.”

Caldeira initiated the project with lead author Ricarda Winkelmann while she was a Visiting Investigator at the Carnegie Institution for Science. Winkelmann and co-author Anders Levermann are at the Postdam Institute for Climate Impact Research; co-author Andy Ridgwell is at the University of California Riverside.

“It is much easier to predict that an ice cube in a warming room is going to melt eventually than it is to say precisely how quickly it will vanish,” Winkelmann said, explaining all the contributing factors for which the team’s models had to account.

The team used modeling to study the ice sheet’s evolution over the next 10,000 years, because carbon persists in the atmosphere millennia after it is released. They found that the West Antarctic ice sheet becomes unstable if carbon emissions continue at current levels for 60 to 80 years, representing only six to eight percent of the 10,000 billion tons of carbon that could be released if we use all accessible fossil fuels.

“The West Antarctic ice sheet may already have tipped into a state of unstoppable ice loss, whether as a result of human activity or not. But if we want to pass on cities like Tokyo, Hong Kong, Shanghai, Calcutta, Hamburg and New York as our future heritage, we need to avoid a tipping in East Antarctica,” Levermann said.

The team found that if global warming did not exceed the two degree Celsius target often cited by climate policymakers, Antarctic melting would cause sea levels to rise only a few meters and remain manageable. But greater warming could reshape the East and West ice sheets irreparably, with every additional tenth of a degree increasing the risk of total and irreversible Antarctic ice loss.

This is the first study to model the effects of unrestrained fossil-fuel burning on the entirety of the Antarctic ice sheet. The study does not predict greatly increased rates of ice loss for this century, but found that average rates of sea level rise over the next 1,000 years could be about  three centimeters per year (more than one inch per year) leading to about 30 meters (100 feet) of sea level rise by the end of this millennium. Over several thousand years, total sea level rise from all sources could reach up to 60 meters (200 feet).

"If we don't stop dumping our waste CO2 into the sky, land that is now home to more than a billion people will one day be underwater," Caldeira said. 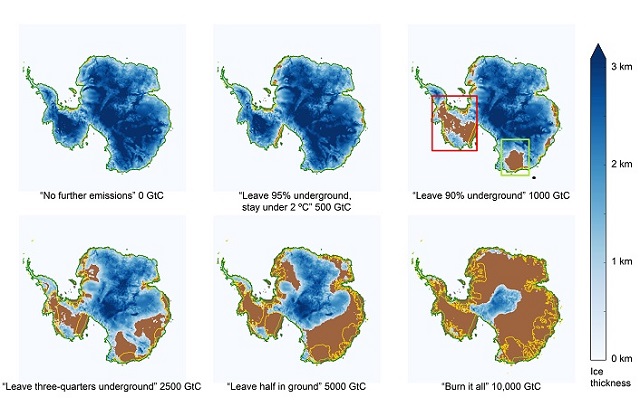 This chart shows how Antarctic ice would be affected by different emissions scenarios. (GtC stands for gigatons of carbon.) It is provided courtesy of Ken Caldeira and Ricarda Winkelmann.