Search and rescue teams on Sunday located debris which appeared to belong to the cargo ship El Faro that went missing in the eye of Hurricane Joaquin with 33 mostly American crew members aboard, the U.S. Coast Guard and the ship's owner said.

Life jackets, containers and an oil sheen were spotted by U.S. Coast Guard aircrews flying over the Bahamas on the third day of their search for the container ship. 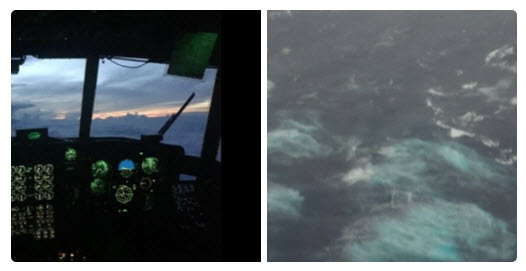 The owners of the El Faro, Tote Maritime, also said two vessels it sent to the scene had found a container "which appears to be from the El Faro."

There had been no sighting of the El Faro or any life boats, Tote Maritime Puerto Rico president, Tim Nolan, said in a statement.

"Our thoughts and prayers remain with the 33 individuals aboard the ship and their families," he added.

The Coast Guard could not confirm that the objects belonged to the El Faro, which sent a distress call on Thursday in the Bahamas but has not been heard from since.

"The debris is scattered about over several miles," said Coast Guard Chief Petty Officer Ryan Doss with the Miami station. "It's going to take some time to verify. The items would appear to be consistent with the missing ship."

El Faro, a 735-foot (224-m) container ship with 28 U.S. citizens and five Polish nationals on board, was headed to San Juan, Puerto Rico, from Jacksonville, Florida when it reported losing propulsion and that it was listing and taking on water, the Coast Guard said. 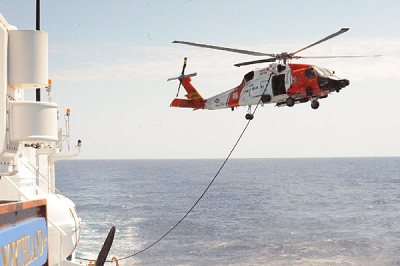 Joaquin battered the central Bahamas archipelago for more than two days with 130 miles (210 km) per hour winds, a potentially catastrophic Category 4 hurricane on a scale of 1 to 5.

Doss said weather conditions in the search area had greatly improved on Sunday which would enable Coast Guard ships or a helicopter to retrieve the debris for verification.

"There is unrestricted visibility and ideal search conditions right now," he said.

The Coast Guard and U.S. Air Force sent out four C-130 search and rescue planes at dawn on Sunday, and three Coast Guard cutters were headed to the area.

On Saturday, pilots working in high winds and seas found three life rings in waters to the northeast of Crooked Island in the Bahamas, about 75 miles (120 km) from the ship's last known position. One was confirmed to belong to the El Faro.

Conditions in the area on Friday and Saturday hampered search efforts, with 20 to 40-feet seas and winds in excess to 115 miles (185 km) per hour, the Coast Guard said.

"This was the most challenging weather conditions anyone on our crew had ever flown," said Coast Guard pilot Lt Dustin Burton after returning Saturday from his mission.

It is not known whether the El Faro was able to recover propulsion at some point.

There were no further communications after a distress call received at about 7:30 a.m. (1130 GMT) on Thursday, the Coast Guard said. The search and rescue efforts have covered more than 30,000 square miles since then.

"We are very surprised that we lost all communication with the ship," Mike Hanson, a spokesman for Tote Maritime Puerto Rico, said.

Philip Greene, president and CEO of Tote Services, part of the New Jersey-based Tote shipping company and which also includes Tote Maritime, said the captain of the El Faro had been watching the storm closely and had calculated he had enough room to steer to its west.

When the ship's engine broke down, "that left him in the path (of Joaquin)", Greene said.

The ship was equipped with an onboard transponder as well as a satellite phone and GPS devices on the containers, he said.

With no word on the fate of the crew, relatives gathered at a seafarers' union hall in Jacksonville, Florida, where they were briefed by the Coast Guard and the ship's owner.

"This is my baby, this is my little girl," sobbed Mary Shevory Wright, an elderly woman waiting for word about her daughter, Mariette Wright, 51, a deckhand who had been at sea since the age of 18.

Fearing the worst Shevory Wright said she was reluctant to enter the union hall. "They are just going to make me cry."

Another woman sat by the curb outside the union hall sobbing as family members hugged each other and held hands nearby.

Barry Young, the uncle of another crew member, said the families still held out hope and the Coast Guard and Tote Maritime had assured them the search would continue on Monday. "This is one that will require a miracle," he conceded.

The families said they were told by the company the ship had two life boats each with a capacity for 43 people.

Chart of the Bahamas

A chart of the area is available here.

The last location of El Faro was northeast of Crooked Island (right side of chart about mid-way down – approx. 22-40N, 74-10W). Soundings are in fathoms – depth of water around last location – approximately 2,600 to 2,800 fathoms. The scroll wheel zooms in and enlarges the area of interest. 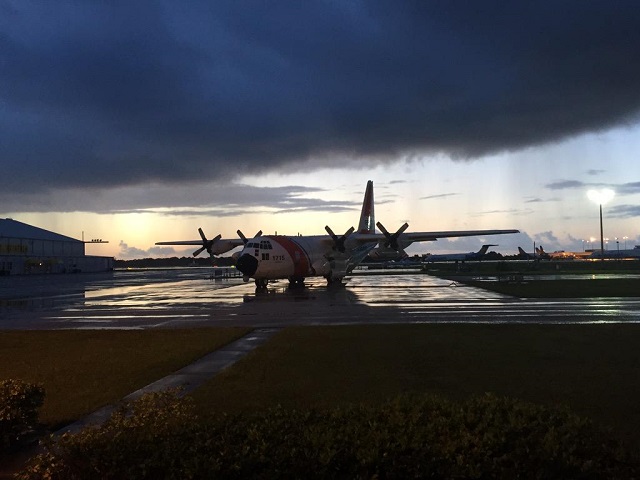