Volcanic Debris May Have Caused Blackout Aboard Australian Amphib

The Royal Australian Navy is still investigating the loss of power incident aboard the amphib HMAS Adelaide off Tonga last month, but it has a working theory: volcanic debris. Adelaide was on site to provide emergency relief after the massive eruption of the Hunga-Tonga volcano in January, and the RAN's top engineering officer said Thursday that the shutdown of the ship's generators was likely connected to floating volcanic material.

"We have never sailed into an environment that's been subject to a volcanic eruption like this, and we believe, and we think, it's quite possible that it's a key factor in the generators going down," Rear Admiral Wendy Anne Malcolm, head of maritime systems for the RAN, speaking at an Australian Senate hearing. "The seawater cooling became blocked because of the ash and the rock in the water, and that has caused the seawater cooling system to overheat, which has caused the diesel generators to go into shutdown."

Adelaide reportedly lost power twice - once when a diesel generator went down on January 29, and again the following day when a gas turbine shut down. Australian news outlet ABC reported that in the South Pacific heat, Adelaide's engine room personnel were working in temperatures of about 120 degrees as they attempt to make repairs. The ship also had to contend with a COVID-19 outbreak on board: Shortly before Adelaide's arrival in Tonga, Australian defense officials reported that there were 23 cases on board the ship.

The vessel's powerplant has since been repaired, with assistance from outside personnel and with new parts flown in to Tonga, and HMAS Adelaide is back under way. On February 12, she conducted her first replenishment at sea with the new fleet oiler HMAS Supply, which recently arrived at Tonga to support the long-distance relief mission. The Supply transferred over about 160,000 gallons of fuel, 16 helicopter loads of relief goods and 30 pallets of fresh food to keep Adelaide running.

Volcanic debris is a known hazard to navigation in the event of a large subsea eruption. After the eruption of Japan's Fukutokuokanoba volcano in August 2021, rafts of pumice washed up in Okinawa and nearby islands, clogging about 30 small ports and damaging dozens of fishing vessels. More than 700 other vessels in the local fishing fleet had to stay in port because of concerns about engine damage. In October, the Japan Coast Guard issued a notice to mariners for the area near Okinawa, advising vessels to "keep watch closely and make efforts to detect defects early, such as by checking the strainers of the seawater system on a regular basis." The service recommended monitoring seawater pressure gauges and watching for changes in seawater discharge flow for signs of blockage.

After the eruption of Hunga-Tonga, vast rafts of pumice and areas of ash-contaminated water were visible from space, and imagery of the ash-fall area was released by NASA. The volcano lies just 35 nm to the north of Tonga's capital of Nuku'alofa, where Adelaide called in the days after the eruption. 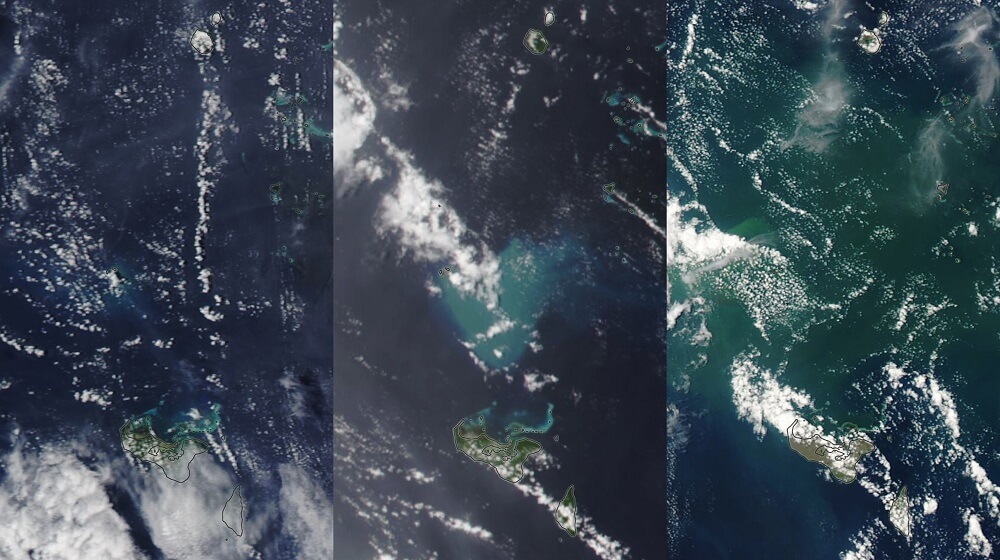 Water discolored by debris from Hunga-Tonga, left to right: January 7, before the eruption; January 15, the day of the eruption, showing blue-green discoloration; and January 17, showing spread of discoloration towards Nuku'alofa (NASA)