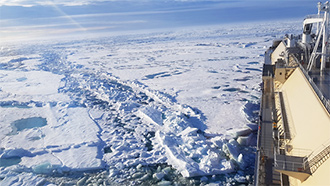 The ice-breaking LNG carrier Vladimir Rusanov, which is jointly owned by MOL and China COSCO Shipping , has successfully arrived at the Bering Strait. The voyage marks a first for the Yamal LNG Project's direct delivery of LNG to East Asia.

The Vladimir Rusanov loaded LNG from the Yamal LNG plant at Sabetta port on June 25. She arrived at the Bering Strait on July 6, and is expected to unload at Jiangsu Rudong port in China later this month.

The vessel, built by DSME, is the first of three newbuilding vessels for MOL and China COSCO Shipping announced in July 2014. She started LNG transportation services in the end of March 2018, she has transported four LNG cargoes westward to Europe. Now, with the arrival of the Arctic summer, she was able to navigate eastwards along the Northern Sea Route to East Asia via the Bering Strait without ice-breaker support.

“The voyage sets a new benchmark in the transportation of natural resources from the Arctic via the shorter Northern Sea Route, giving further momentum of natural resource development in the Arctic,” said MOL in a statement. “This will be of considerable benefit to meet the growing energy needs of many natural resource importing Asian countries, including Japan and China.”

Construction of the second and the third vessels for MOL and China COSCO Shipping is underway at DSME's Okpo shipyard. They are expected to be delivered at the end of September 2018 and September 2019 respectively.

The Arctic is a rich repository of natural resources, holding an estimated 13 percent of the world's undiscovered oil resources and 30 percent of its undiscovered natural gas resources, according to an assessment conducted by the U.S. Geological Survey. Investment in the next large LNG project near Russia's Yamal Peninsula is expected, giving further momentum to stable resource procurement from the Arctic Ocean via the shorter Northern Sea Route, a significant benefit for Japan's energy resource needs.

Furthermore, it is anticipated that global demands for LNG as a clean energy will increase at an annual rate of five percent over the next 10 years. In particular, China, India and Southeast Asia are expected to see a large increase in LNG imports. Also, demand from Europe is expected to rise due to a recent decrease in its intra-regional production of LNG.