Videos: An Ice Dive, a Grounding and a Daring Rescue

It has been a long time since the U.S. Coast Guard’s divers practiced in Arctic waters. In 2006, two crewmembers of the cutter Healy – Lieutenant Jessica Hill and boatswain’s mate Steven Duque – took advantage of an ice liberty to do a training dive. Three minutes into the exercise, their safety lines began to pay out beyond the 20 feet of depth they had planned for. They were down for more than 20 minutes before a backup diver ordered bystanders to haul them up by their lines. Hill and Duque were unresponsive, and efforts to revive them were unsuccessful. An investigation found that they had carried nearly twice the necessary amount of dive weights – some of it in zippered pockets.

In the wake of the accident, the Coast Guard suspended its Arctic diving program, stripped the Healy of its diving equipment and removed her master from command. On July 29-30, after an eleven year hiatus, the Healy’s ice diving capabilities were restored: PO2 Adam Harris, PO1 David Bradbury, PO2 Brian Lehuede, chief petty officer Chuck Ashmore and PO1 Brendon Ballard became the first USCG divers to perform an Arctic ice dive in more than a decade. Harris held up the Coast Guard ensign for a photo to celebrate the occasion (below). 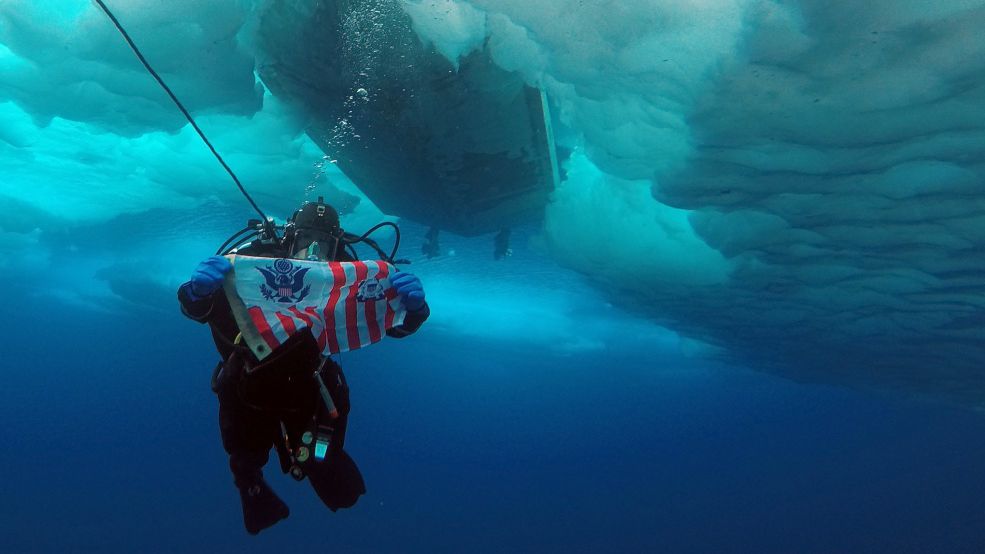 A newly released timelapse video of the effort to refloat the CSCL Jupiter shows a flotilla of tugs moving her stern back and forth to lever her bow out of the mud. The footage provides an overhead view of an effort that was partially visible from shore (second video below).

The Jupiter went aground Monday on the banks of the Westerschelde during a transit from Antwerp to Bremerhaven, briefly shutting the busy channel to commercial traffic. She was refloated on a high tide the same evening with the assistance of 16 tugs.

A beachgoer was cut off by the tide on the rocks at Bude, North Cornwall on Saturday night, and two good samaritans put themselves at risk attempting to rescue him. A UK Coast Guard helicopter was on scene within half an hour of receiving word of the emergency.

“This was a challenging rescue for a number of reasons: firstly the worrying picture of how many people were involved and their location; the close proximity of the casualties to the cliff; the weather with an offshore wind blowing directly onto the cliff, large waves, messy surf and peaking high tide,” said Coastguard Winch Operator Ginge Steabler.

Winchman Mark 'Spike' Hughes was lowered on the winch towards the casualty but was hit a by a large wave. He recovered quickly, but he was hit a second time just as he was placing the strop over the casualty. Still attached to the winch wire, both were swept into the sea. They were winched quickly out of the surf but as they came out, Spike realized the rescue strop was just around the man’s arm. Using the wireless radio, he directed they were to be taken to the remaining patch of dry beach next to the cliff. The second casualty was located on the beach safe and well with the third casualty, who had climbed down the cliff to offer assistance. All three were winched into the helicopter, and two of the casualties were taken to Derriford hospital for treatment for mild hypothermia.