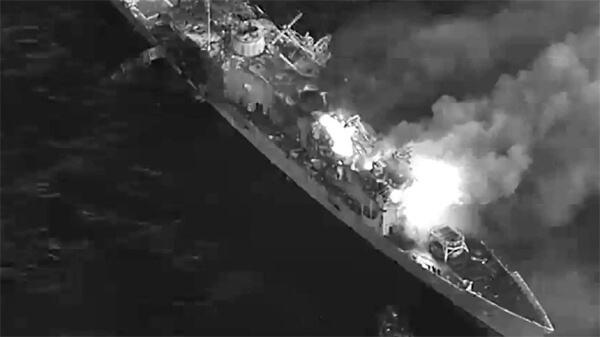 “This exercise provided a great opportunity for the extremely talented sailors, soldiers, and aviators who comprise the RIMPAC 2022 team to hone their skills in a live-fire setting,” said Royal Canadian Navy Rear Adm. Christopher Robinson, deputy commander of the RIMPAC Combined Task Force. “There is nothing that really replaces the training value of opportunities such as this, which enable us to test our weapons and their associated combat systems with as much realism as possible. These live fire exercises are vital for maintaining our proficiencies, building our interoperability, and increasing our readiness for future operations.”

Units from Australia, Canada, Malaysia, and the U.S. all participated in this year’s SINKEX. Among the systems deployed against the retired vessel, the Royal Canadian Navy frigate HMCS Winnipeg fired two Harpoon missiles while a U.S. Navy  P-8A Poseidon maritime patrol aircraft deployed an AGM-84D Harpoon missile, and a F/A-18F Super Hornet from Nimitz-class aircraft carrier USS Abraham Lincoln launched a GBU-16 laser-guided bomb. In a first for the Royal Malaysian Navy, one of its vessels, the corvette KD Lekir also participated in SINKEX firing an Exocet MM40 missile.

The video shows the extensive damage inflicted on the 453-foot vessel. The Oliver Hazard Perry-class guided-missile frigate was commissioned on May 9, 1987, was homeported early in her service at Yokosuka, Japan, and later conducted multiple joint operations with embarked Coast Guard law enforcement detachments, disrupting illegal human trafficking and drug routes. The ship was decommissioned on January 23, 2015.

The U.S. Navy emphasizes that former vessels used in SINKEXs are prepared in strict compliance with regulations prescribed and enforced by the Environmental Protection Agency. Each vessel is put through a rigorous cleaning process, including the removal of all polychlorinated biphenyls (PCBs), transformers and large capacitors, all small capacitors to the greatest extent practical, trash, floatable materials, mercury or fluorocarbon-containing materials, and readily detachable solid PCB items. Petroleum is also cleaned from tanks, piping, and reservoirs.

The world's largest international maritime exercise, RIMPAC 2022 consists of twenty-six nations, 38 ships, four submarines, more than 170 aircraft, and 25,000 personnel participating in the exercises from June 29 to August 4 in and around the Hawaiian Islands and Southern California. RIMPAC 2022 is the 28th exercise in the series that began in 1971.