On Tuesday, the U.S. National Transportation Safety Board convened a meeting in Washington to review the circumstances surrounding the sinking of the ill-fated con/ro El Faro in 2015. All 33 members of the El Faro’s crew perished, making it the worst American vessel casualty since the loss of the Marine Electric in 1983.

In a series of votes Tuesday afternoon, the Board endorsed the conclusions of a painstakingly compiled staff report, including findings about systemic factors that preceded the accident; the weather data and crew decision-making prior to El Faro's encounter with Hurricane Joaquin; and the sequence of events during the ship's final hours. The live video stream of the meeting is available here, and the NTSB will release the full 400-page report once it has reviewed and endorsed its contents.

After thousands of man-hours and two years of work, the NTSB's staff presented the following key conclusions, among many others. This list is compiled from testimony presented in Tuesday’s meeting and from the executive summary of the NTSB report, which is available by clicking here.

- The vessel's captain did not take sufficient action to maintain a safe distance from the the storm.

- By failing to adequately consider the suggestions of the ship’s junior officers to alter the passage plan and failing to alter his decision to proceed, the captain endangered El Faro and its crew.

- The concepts of bridge resource management were not implemented on board El Faro.

- The captain's decision to abandon ship was later than advisable, and the delay may have reduced the crew's chance of survival.

- The El Faro's crew had access to and utilized weather information that was at least six hours behind the National Hurricane Center's latest forecast.

- The mechanical condition and operation of the vessel's boilers, steering, electrical power and machinery were not factors in the accident.

- However, if the El Faro's turbine lube oil sump had been maintained at a higher level, she might have been able to keep her propulsion plant running longer. An additional amount of lube oil in the sump – a quantity that was available on board – could have kept the bellmouth of the intake submerged beyond 18 degrees of list, the angle at which NTSB calculates that El Faro's lube oil pump lost suction.

- Cars in Cargo Hold 3 likely broke free of their lashings when flooding from a leaking scuttle began to float them off the deck. It is likely that sea water piping within Hold 3 was struck and ruptured by loose cars, leading to ingress of water and loss of stability – even after the leaking scuttle was secured.

- The crew were not adequately informed of the importance of securing the fire dampers in the ventilation trunks for El Faro's cargo holds. Under the vessel's COI, these dampers must remain open under way. In the vessel’s downflooding calculations, they are assumed to be closed under way. The dampers were open, and on the low side they would likely have begun to admit water about 40 minutes before El Faro sank. 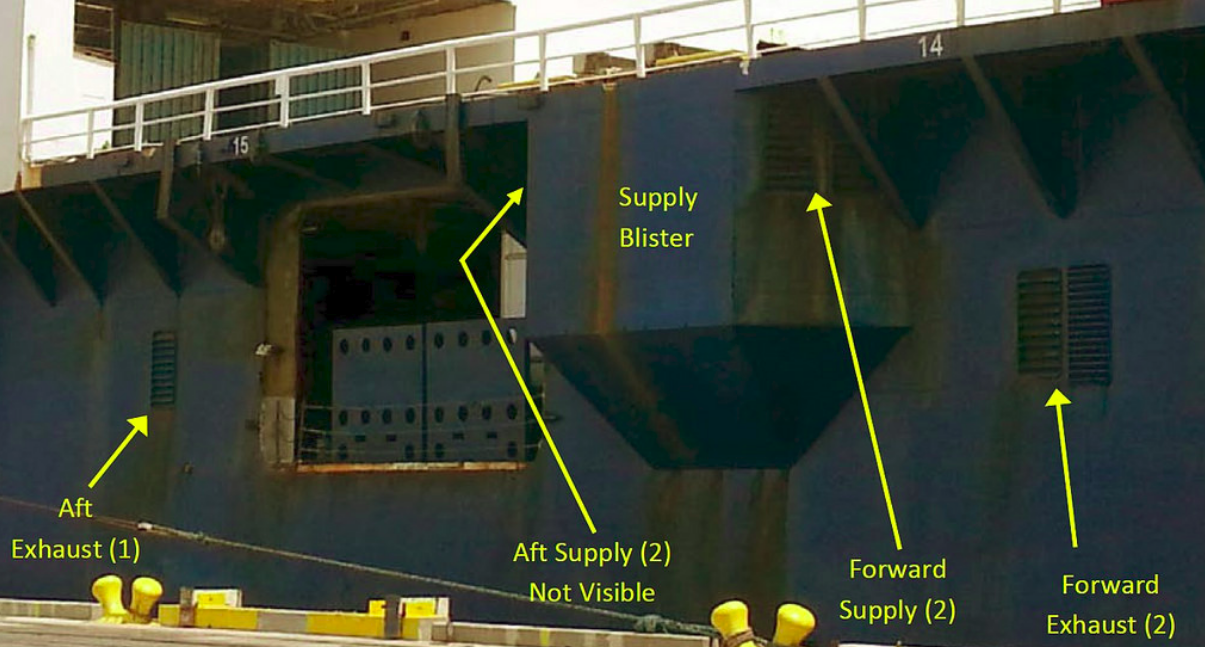 - The vessel operator’s failure to ensure the implementation of bridge resource management contributed to the sinking.

- The company’s safety management system was inadequate and did not provide the officers and crew with the necessary procedures to ensure safe passage, watertight integrity, heavy-weather preparations, and emergency response during heavy-weather conditions.

- The company’s lack of oversight in critical aspects of safety management, including gaps in training for shipboard operations in severe weather, denoted a weak safety culture in the company and contributed to the sinking of El Faro.

- The Coast Guard Alternate Compliance Program is not effective in ensuring that vessels meet safety standards, and many vessels are likely to be operating in substandard conditions.

The ACP allows U.S. flag shipowners to hire an authorized class society to conduct annual inspections rather than the Coast Guard's own inspectors. Just before the loss of the El Faro, the Coast Guard employed its senior traveling inspectors to oversee inspection of 15 targeted Alternate Compliance Program (ACP) vessels that had successfully completed surveys by authorized class societies. These inspectors found deficiencies in all 15 ships, leading to two no-sail orders and three vessel demolitions.

- A 2005 work period that increased the El Faro's draft should have been classified as a significant conversion, a Coast Guard determination that would likely have required upgrades to meet current regulatory standards (rather than the standards in effect at the time of the vessel's construction).

Probable cause of the sinking

The National Transportation Safety Board (NTSB) determines that the probable cause of the sinking of El Faro and the subsequent loss of life was the captain’s insufficient action to avoid Hurricane Joaquin, his failure to use the most current weather information, and his late decision to muster the crew.

Further contributing factors to the loss of El Faro were flooding in a cargo hold from an undetected open watertight scuttle and damaged seawater piping; loss of propulsion due to low lube oil pressure to the main engine resulting from a sustained list; and subsequent downflooding through unsecured ventilation closures to the cargo holds.

The U.S. Coast Guard’s Marine Board of Investigation has already issued its own, independent report, which is available in summary form here.