A small containership registered in Bangladesh heeled over and partially sank at India’s Kolkata (formerly Calcutta) port on Thursday sending crewmembers running for safety and numerous boxes falling into the harbor. Port officials reported that the vessel had just completed loading and was due to depart for Chittagong in Bangladesh on Friday.

''The vessel... suddenly capsized within 15 mins at 10:40 am. An inquiry into the incident has been ordered,'' a spokesperson for the local port authority told reporters.

The Marintrust 01 is a 3,400 dwt vessel built just four years ago and operating on a regular route between India and Bangladesh. The vessel, which is 272 feet long, had arrived in Kolkata on Tuesday from the Indian port of Sagar and was loaded with a total of 165 containers when it suddenly without warning tilled causing containers to fall into the harbor. The vessel which has a capacity of 244 TEU came to rest at an angle away from the dock with containers continuing to shift and fall due to the angle. 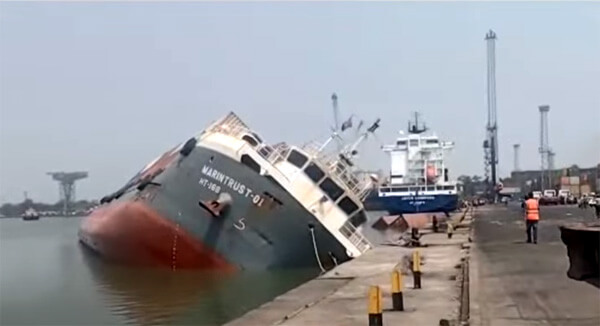 Reports said that 18 of the 20-foot containers sunk in the harbor while 10 of the 40-foot containers were floating in the water. A tug came alongside to assist while ropes were attached to secure the floating containers. A spokesman for the shipping company said he did not know the contents of the boxes.

Habibur Rahman, manager of Dhaka-based Mango Logistics Limited, charterer of the vessel, told local media that the berth operator failed to properly handle the vessel while loading laden containers thus it lost balance and partially sank. “We are trying to recover the vessel,” he pointed out.

Officials said operations in the port continued normally after the accident while they also worked to secure the containers from the harbor.