One of the most historic cargo ships in the world, the four-masted bark Peking recently returned to Hamburg, Germany after an extensive restoration. She is destined to become the fourth large museum ship docked along the Elbe River in Hamburg.

Although the Peking arrived in Hamburg being towed instead of under sail, the return of the ship to Hamburg was a significant moment in her long career. It marked 88 years since she had last departed Hamburg. Since 2017, the Peking had been undergoing a long-overdue renovation at the Peters Werft shipyard in Wewelsfleth, Germany.

Launched on February 25, 1911, at the historic Blohm + Voss shipyard in Hamburg, the Peking was already a bit of an anachronism as the shipping world was converting to steam power. Her owners, F. Laeisz was famous for their “Flying P Liners” and as one of the world’s largest sailing ships at the time the Peking lived up to the company’s heritage. She measured 377 feet in length and her four masts with 34 sails had a maximum height of 177 feet above the waterline. With over 44,000 square feet of sail area, she reportedly could reach a remarkable speed of up to 17 knots.

The Peking entered service in May 1911 sailing from Hamburg to Valparaiso, Chile rounding Cape Horn at the southern end of South America. She could make the trip in just 70 days which was an unheard of speed for the transit by a sailing vessel. Engaged in the trade transporting saltpeter, a form of fertilizer, from Chile to Germany, she reportedly rounded the horn 34 times in her career.

Just three years after she went into service, the Peking was interned in Chile during World War I. At the end of the war, she returned to London and then in 1921 was awarded to Italy as war reparations. Finally, in 1923 Laeisz was able to reacquire the ship and returned her to the originally intended cargo service. While the shipping industry of the 1920s was mostly steam-powered and already beginning the conversion from coal to oil, the Peking continued to sail without auxiliary engines. 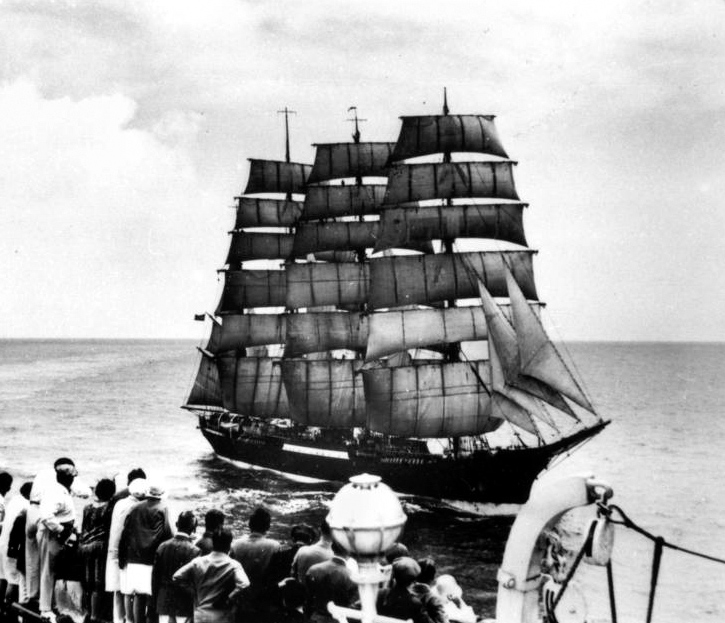 The economics of the times caught up with the sailing ships in the 1930s and the outmoded Peking was sold in 1932 to the British who turned her into a training ship named the Arethusa. During World War II she briefly served as a barracks ship for the British Navy, but in the port-War years, she returned to her role as a training ship.

By the early 1970s, it seemed the Peking was destined for a scrapyard when instead she was acquired to go on display at the South Street Seaport Museum in New York City. Arriving in New York in 1974, she would spend the next 40 years as a tourist attraction. However, with mounting financial difficulties the South Street Seaport decided to dispose of the Peking instead focusing on another sailing ship, the Wavertree, as its centerpiece. As early as 2002, German interests approached the museum about the return of their famed sailing ship, but the asking price was simply too expensive. A decade later, faced with the alternative of scrapping the ship, the South Street Seaport agreed to donate the Peking to Germany for $100 if the Germans could raise the money to remove her from Manhattan and get her home to Hamburg. 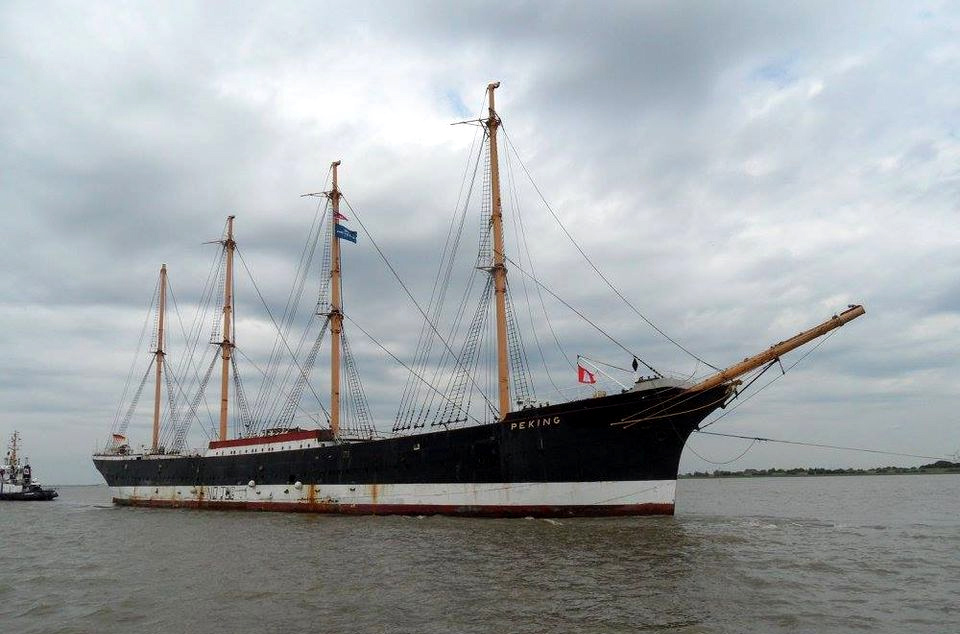 Peking arriving in Germany in 2017 - photo courtesy of Peters Werft

The Peking closed in New York at the end of August 2016 and shortly thereafter was towed to a local shipyard to prepare for her voyage home. The following July, she was loaded on to the heavy lift ship Combi Dock III departing New York for the last time. She arrived in Germany in August 2017.

Badly in need of an extensive restoration, the Peking’s masts were removed and her steel hull was dry docked for the first time in decades at Peters Werft. They were pleasantly surprised to find the hull in overall good condition and some of her original cast iron parts were even found in her ballast. However, unexpected amounts of lead and asbestos contributed to higher costs for the restoration which is reportedly at 38.5 million euros ($45.5 million). She left the drydock in November 2018, and then the work of reinstalling her masts began. 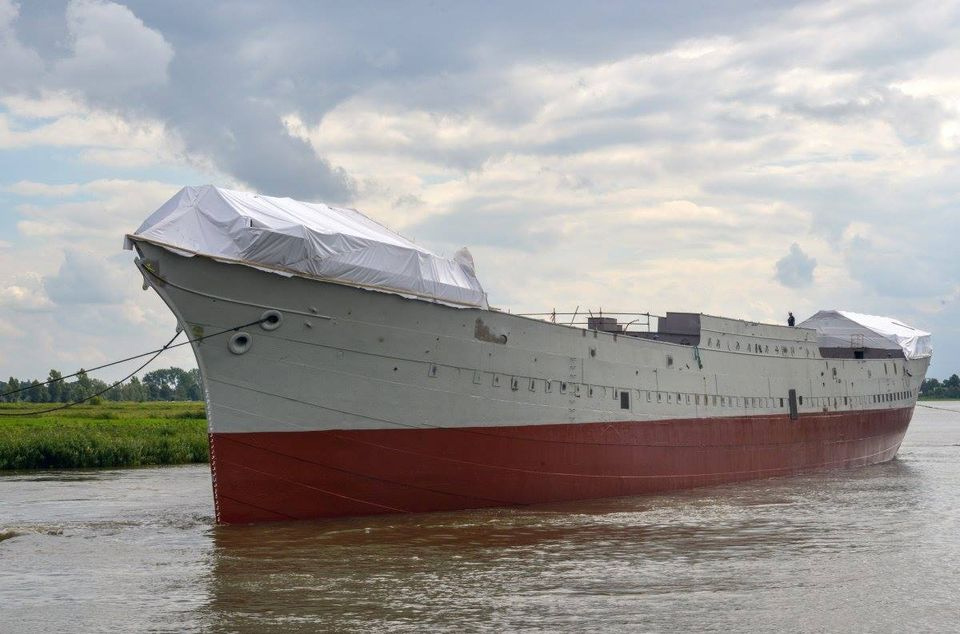 The German plan is to restore the Peking to her 1927 condition. New interior floors, storage rooms, and furnishings are being added along with new water tanks and wood decking. While very little documentation exists on the ship, they are also seeking to recreate her accommodation areas.

Earlier this month, the historical sailing ship made her way along the Elbe to Hamburg. Work is currently being completed on the Peking and it is anticipated that ship will open to the public in the summer of 2021. She will become the centerpiece of a new maritime museum due to open in Hamburg in 2025.

In a first for the maritime industry, a Danish port is on track to achieve a 70 percent reduction in carbon emissions through the use of renewable offshore wind energy and an energy management system. Port Esbjerg, located on the southwest coast of Denmark, is working with Honeywell on a comprehensive carbon and energy management program linked to Denmark’s goals for decarbonization.  Port Esbjerg recently inaugurated its first shore-to-ship power units, which allow docked vessels to run on renewable electricity...

Australian authorities announced that they are sending a support vessel out to meet up with the fire-damaged supply ship returning from Antarctica with 72 expeditioners and 37 in crew. They are calling this latest action a precautionary measure as the vessel is proceeding under its own power after an additional maintenance issue.  A large anchor handling supply vessel supporting an offshore drilling project in North Western Australia, the 249-foot Go Spica, was hired to sail from Fremantle to provide additional...

Hagland Shipping is diving into battery-hybrid propulsion with an order for up to four new self-discharging, hybrid-powered coastal bulkers. When delivered, they will be among the first of their kind in the sector.  Hagland has contracted for an initial order of two 5,000 dwt, plug-in hybrid vessels from the Dutch shipbuilder Royal Bodewes. The design emphasizes zero-emissions, low-noise operations in harbor and reduced emissions while under way.  The new vessels will replace older ships with traditional propulsion systems. The plug-in...