Update: On Sunday, October 31 Greece permitted the Turkish vessel to dock and began processing the people on board at a center on the island of Kos. Greek officials are reporting that only 112 of the people aboard appear to be from Afghanistan with over 250 from Pakistan and Bangladesh. There were also a few people from other Middle Eastern countries, ranging from Syria and Iran to Egypt. They set the total at around 375 people, and they are working with international organizations to confirm identities and ages. They have also asked Pakistan and Bangladesh to accept the return of their citizens.

The Hellenic Coast said on Friday that it was conducting one of the largest search and rescue operations in recent years in the Eastern Mediterranean. They released pictures and a video of a small cargo ship loaded with migrants or possible refugees that the Coast Guard reported was disabled. The reports said that the vessel was being taken to “a safe place,” but an NGO group is questioning the operation noting that the vessel has remained at sea.

The NGO Aegean Boat Report said that it received word from the vessel that there were approximately 400 people aboard which they said are refugees from Afghanistan. According to their reports, the unidentified small cargo ship was carrying the people loaded on the deck heading to Italy when it encountered rough seas in the Mediterranean. Reporting that the vessel was experiencing engine problems they were heading to Crete when the motor reportedly stopped working.

Aegean Boat Report says that it alerted the Hellenic Coast Guard to the plight of the ship and that the Coast Guard was seen arriving alongside the vessel. The vessel was later taken under tow with images of Greek forces on the bridge of the cargo ship. However, according to the NGO, the vessel has been towed into the Aegean, but not taken to a port. 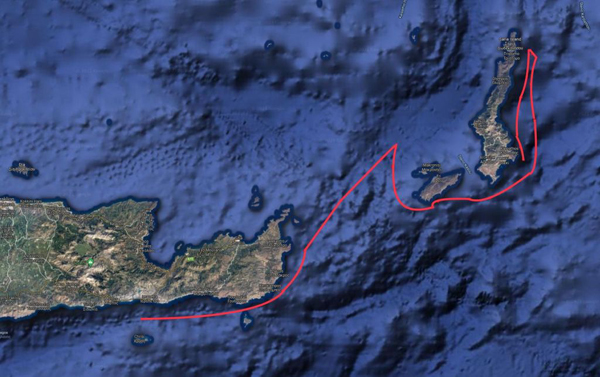 The fear was that the Greek authorities, which are reporting that the vessel was Turkish, would tow the vessel back into Turkish waters and release it. The speculation is that Greece has made diplomatic appeals for Turkey to take control of the vessel and the people aboard. In the meantime, the vessel has been towed on a circuitous route, not taken to port, and according to the NGO, no water or food has been supplied to the people aboard the ship.

The flow of migrants from Turkey seeking to enter the EU via Greece has been a point of contention in the Eastern Mediterranean. In 2016, the EU and Turkey reported that they had an agreement to stop the flow of asylum-seekers into Greece. While the number of people attempting to cross the Aegean has declined Greece and Turkey remain at odds over the attempts often in small boats. 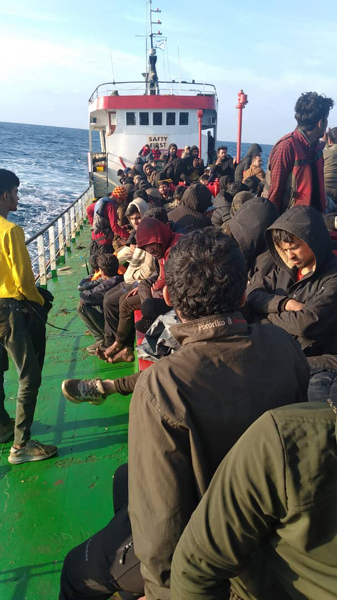