A derelict bulker that has been in an anchorage outside Rio de Janeiro broke free on November 14 and during high wind conditions drifted across the harbor striking the main computer bridge connecting the city of Rio with the eastern suburbs of Niterói and São Gonçalo. The bridge, which is one of the longest spans in the world, was closed for several hours and while partially reopened is undergoing further inspections today.

The Brazilian Navy took command reporting that the bulker, the 42,815 dwt São Luiz had traveled about two-thirds of a mile from the anchorage near Ilha do Governador. Local media reports indicated that strong winds were blowing across the area and it was raining lightly at the time of the accident.

They are reporting that the vessel’s anchor failed, permitting the ship to drift free from the anchorage which is used to hold laid-up vessels. The São Luiz drifted ultimately coming in contact with the bridge stern first with the exhaust tower behind the accommodation block striking the guardrail of the bridge. Pictures show a small gash in the structure of the ship and reports indicate that a distance of the guardrail was damaged and will require repairs.

The allision with the bridge occurred in the early evening during a busy commuter time. Cars were crossing the bridge but all traffic was stopped while an initial inspection was conducted. Several tugs were dispatched and moved the abandoned bulker to a dock pending further investigation.

The São Luiz has been in the anchorage since 2016. The vessel is owned by Navegação Mansur but became involved in a lawsuit and in 2018 the owner removed a crew from the vessel. It has been riding anchor abandon in the anchorage with pictures showing a buildup of rust. Media reports are calling the vessel no longer suited for operations. The anchorage has become a point of controversy with local media calling it a graveyard for old vessels abandoned by their owners.

The Navy said it will investigate the responsibility for the accident. The shipowner although they have abandoned the vessel could still be held liable for the repairs to the bridge as well as the disposal of the vessel which remains at a dock in Rio de Janeiro. 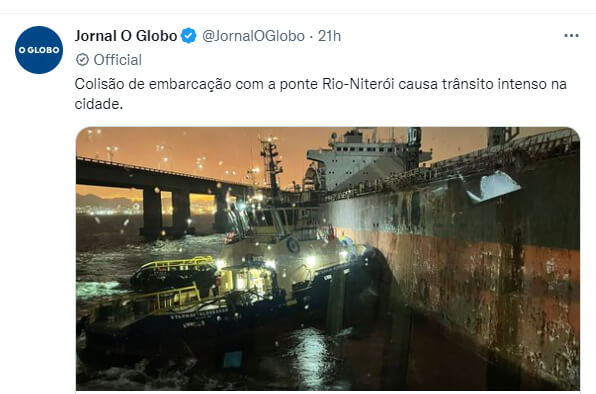