The crew of the newly-built carrier USS Gerald R. Ford laid the remains of more than two dozen veterans to rest on Veterans Day in the ship's first burial at sea ceremony.

The cremated remains of 29 servicemembers (from four service branches) and one merchant mariner were buried at sea on Nov. 11. This ceremony was the first aboard USS Ford, which is under way in the Atlantic on a steaming exercise following an extended repair period.

“The burial at sea ceremony connects us to the rest of the fleet and it also connects to our traditions, our pasts, and those who were also connected to the sea,” said Ford chaplain Cmdr. Dave Kim, from Mineola, New York.

Chaplain Cmdr. Michael Amedick conducted the ceremony. "There was a lot of service among them across a lot of eras; it’s just nice to be able to honor that service in a fitting way, and even more special to be able to do it on Veterans Day,” said Cmdr. Amedick. “All of them served, we’re just trying to honor their desire [for burial at sea] in a way that is fitting for what they did.” 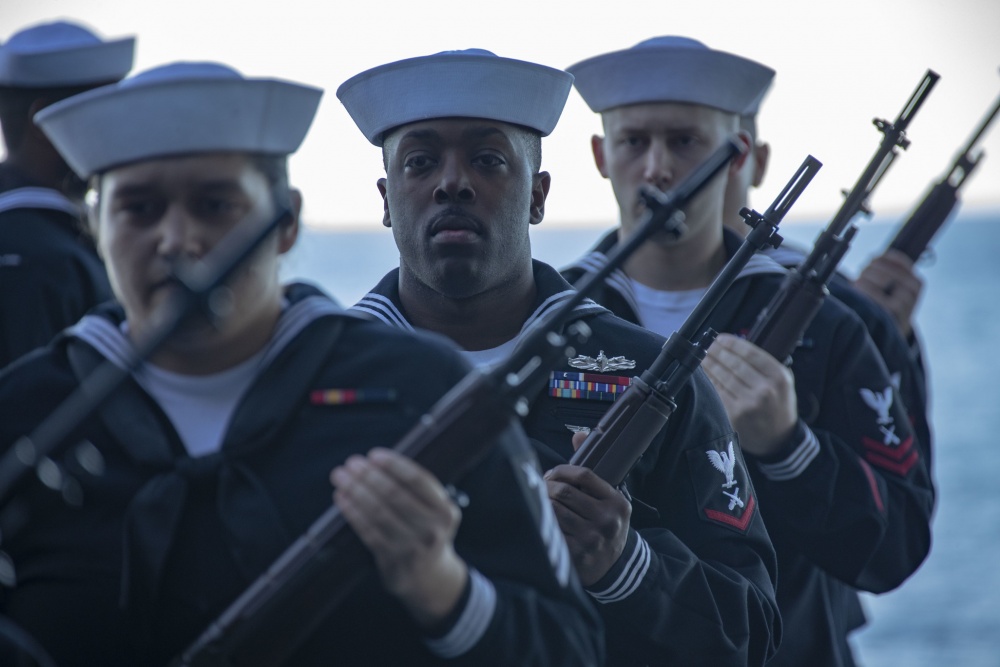 Surviving family members of the deceased receive the American flag that was carried with their remains, three spent cartridges representing each of the volleys fired by the firing detail’s 21-gun salute, a certificate showing the charted coordinates of where their loved ones were laid to rest, photos from the event and a personal letter from Ford’s commanding officer, Capt. John J. Cummings. “Because the family members aren’t able to attend the burial at sea in person, they will be really happy to see the pictures and everything we’ve done to make it more meaningful to them,” said Amedick.

Sailors stood in formation on Ford’s aircraft elevator 3 in their dress blue uniforms. At 9 0900 hours, the command was announced, “all hands bury the dead.” After a prayer from Amedick, the ceremony proceeded. Bearers carried each urn of cremated remains to a platform at the rail's edge as Amedick read their names and background aloud. Salutes were rendered as they were released to their final resting place, and “Taps” sounded from a lone bugle over the participants and attendees.