The U.S. Coast Guard has issued a warning bulletin about the latest potential point of failure during twin fall lifeboat drills. The SOLAS-mandated exercises have historically ranked among the most dangerous deck evolutions practiced by merchant mariners, because procedural or equipment failures can result in a deadly fall from height.

The Coast Guard highlighted a recent case demonstrating a new vulnerability: the remote control wire, a thin wire rope that allows the occupants of the lifeboat to control lowering speed from inside the boat as it lowers away. If the remote control wire spools badly on its drum, it can become kinked, break, or pay out unevenly, leading to sudden changes in vertical velocity and extreme motion of the lifeboat.

In addition to inducing abnormal loads on the lifeboat's quick-release hook system - a sensitive and safety-critical piece of rigging - the sudden changes in speed can cause the lifeboat to swing uncontrollably.

In a recent example documented by the Coast Guard, the remote control wire on a lifeboat davit failed twice in two different ways during an inspection.

First, poor winch spooling kinked the wire and created enough force to part it. Second, after the parted wire was replaced and a new one wound onto the drum by hand, the new wire paid out suddenly and erratically during testing, resulting in extreme and dangerous lifeboat motions.

While coming down and swinging side to side, the skeg of the lifeboat caught on the knife-edge of the ship’s deck, causing the lifeboat to list more than 90 degrees away from the ship. Luckily for the occupants, a crewmember activated the winch brake lever from the deck, preventing the boat from inverting. 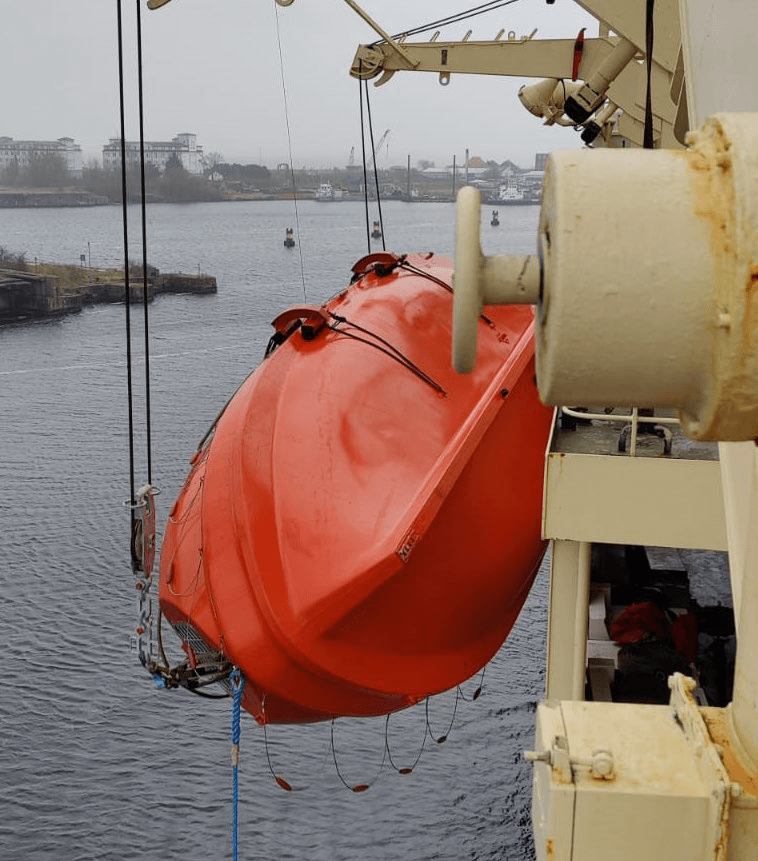 Based on the outcome of previous lifeboat accidents and the altitude of the davit above the water, the incident could have potentially been fatal for the occupants if the lifeboat had detached from the falls or if the crew had been ejected from the boat.

An internal company investigation found that the crew had not followed company policy, which requires that crewmembers must first lower away the lifeboat empty before boarding and lowering it a second time in a manned configuration.

Given the risks involved, IMO MSC determined in 2009 that "operating crew should not be required to be on board lifeboats during launching" unless the master exercises his or her authority to send them aboard.