U.S. Expected to Be Net Exporter of Natural Gas This Year

The U.S. Energy Information Administration's latest Short-Term Energy Outlook projects that the U.S. will export more natural gas than it imports in 2017.

In addition, supplies of natural gas out of Appalachia into the Midwestern states are likely to gradually displace some pipeline imports from Canada as well as increase U.S. pipeline exports to Canada from both Michigan and New York. Several new pipeline projects, including the Rover and Nexus Gas Transmission pipelines, are also being developed to increase takeaway capacity from the Marcellus and Utica supply regions that span parts of New York, Ohio, Pennsylvania, and West Virginia into the U.S. Gulf coast, Midwestern states and eastern Canada.

EIA expects exports of LNG to increase. U.S. liquefaction capacity continues to expand as five new projects currently under construction, Cove Point, Cameron, Elba Island, Freeport, and Corpus Christi, come online in the next three years, increasing total U.S. liquefaction capacity from 1.4 Bcf/d at the end of 2016 to 9.5 Bcf/d by the end of 2019. 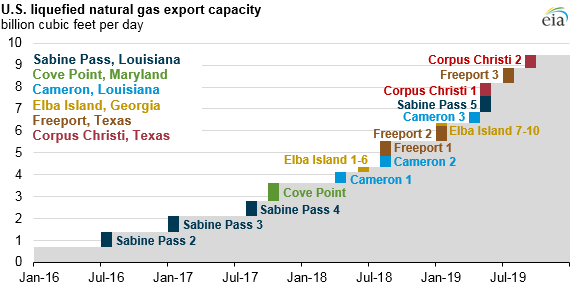 Based on construction plans, EIA expects that by 2020 the U.S. will have the third-largest LNG export capacity in the world after Australia and Qatar. The latest Short-Term Energy Outlook forecasts that U.S. LNG exports will reach 4.6 Bcf/d by December 2018 as new liquefaction trains at Cameron, Freeport and Elba Island come online. However, actual use of U.S. LNG export terminals will be affected by the rate of global LNG demand growth and competition from other global LNG suppliers.