After a marathon four-day search and rescue effort, the U.S. Coast Guard cutter Dauntless retrieved 27 migrants from the rocky cliffs of Monito Island, an outcropping located midway between the Dominican Republic and the western coast of Puerto Rico.

Last Wednesday afternoon, Coast Guard watchstanders received a VHF call from the fishing vessel Jerimar, which reported the sighting of a possible migrant vessel in the vicinity of Monito Island. Sector San Juan launched a Coast Guard Jayhawk helicopter from Air Station Borinquen and diverted the Coast Guard Cutter Dauntless to search for the vessel.

The helicopter aircrew quickly spotted the vessel, which was disabled and adrift. The crew of the Dauntless arrived on scene soon after and rescued 10 migrants, including one man and nine women. The survivors reported that the boat had run aground and lost power, and that at least nine other migrants had gone over the side of the boat in an attempt to reach shore. The status of the missing individuals was unknown.

Since any survivors would need a rescue, the cutters Dauntless and Joseph Doyle and multiple helicopters out of Air Station Borinquen deployed for a search. On Thursday, one of the helicopter crews spotted 20 people on uninhabited Monito Island, prompting a relief and evacuation effort. U.S. Border Patrol agents, Puerto Rico Police Joint Forces and U.S. Coast Guard surface and aviation assets delivered a radio and food supplies to the migrants, and the cutter Dauntless made radio contact with the group. The survivors reported that all of the missing migrants had made it to the island and were safely accounted for. 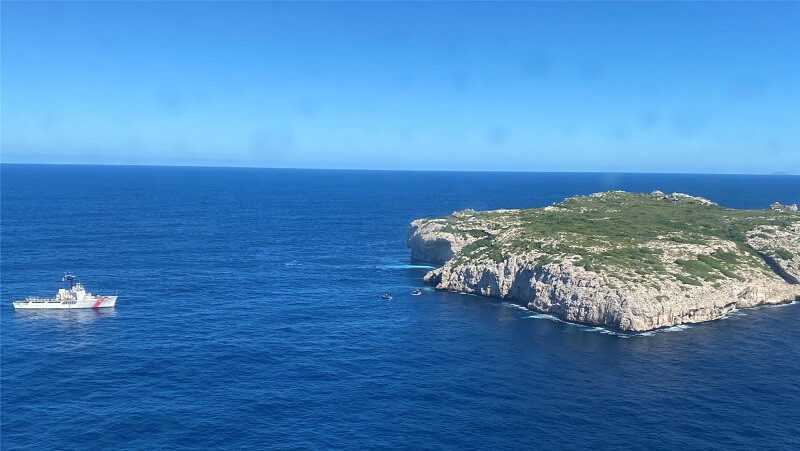 On Saturday morning, after four days of effort, small boat crews from the cutter Dauntless took aboard all 27 migrants from the shores of Monito Island, including 25 Haitians and two others of unknown nationality. Several - including a pregnant woman - had to be rescued from the water when they jumped off the bottom of a cliff.

All of the survivors were delivered to shore in Puerto Rico, where they were processed by the U.S. Border Patrol.

"This case was a very close call, and I commend the efforts of our partner agencies and all Coast Guard units and personnel who  helped save 37 lives from a disabled migrant vessel and from the harsh and dangerous environment of Monito Island, preventing what could have been a major loss of life," said Cmdr. Beau Powers, Sector San Juan chief of response. "To anyone considering taking part in one of these voyages we urge them to not take to the sea, you are putting your life and the life of others at risk."