Industry analyst Dynamar has released the second edition of its Deepsea Ro/Ro Shipping II report, charting the history of the segment and analyzing the current fleet.

The document focuses on two different types of roll-on/roll-off ships operating on routes between the continents: conventional Ro/Ro ships and vehicle carriers.

The first ship looking like a Ro/Ro rather was a kind of a ferryboat, shifting railway wagons over the Forth and Clyde Canal in Scotland, for the first time in 1833.

Deepsea Ro/Ro shipping is a specialization that emerged in the 1960s as one of the offshoots from the once one-concept-fits-all general cargo deepsea vessel. Actually, this was driven by the container, or more particularly by the high degree of cargo unitization the rectangular box offers.

Indeed, it was the combination of a container ship and a Ro/Ro vessel, the ConRo, which was the initial dominant deepsea Ro/Ro carrier. These vessels connected with destinations where handling costs were high, port turnaround slow or port facilities limited. Not needing extensive shore-side handling facilities made the ConRo the ideal ship for serving such trades.

It has above all been Scandinavian operators taking the challenge to invest in the relatively high capital costs of this type of tonnage.

However, it was Atlantic Container Line (ACL) launching the first ConRo in 1967. The Atlantic Span could transport 1,000 TEU plus 1,100 cars. Nowadays, ACL is a subsidiary of the Grimaldi Group, world's largest Ro/Ro operator. Its 1965-founding fathers were all Scandinavian: Incotrans (Holland America Line), Swedish America Line, Transatlantic Steamship and Wallenius. Later on, Compagnie Générale Transatlantique (one of CMA CGM's predecessors) and Cunard Line of the U.K. joined.

An important consideration for the creation of ACL, a Transatlantic ConRo service, was not so much handling costs, port turnaround or inadequate port facilities. It rather was (and is) the quite important number of cars and agricultural machinery moving in this trade.

Last May, ACL took delivery of the last of its five newbuildings, the fourth series since the company's inception. They are of a peculiar design with the Ro/Ro garage midships and all up to 3,800 TEU containers stowed exclusively in cell guides and the true design racks on deck.

ACL's new vessels are the only ones with cellular holds. Most, if not all other ships referred to as ConRo, container-Ro/Ro ship, rather are Ro/Ro-multipurpose vessels with their flush weather deck and ditto tweendecks provided with container sockets (lashing points). Such decks allow for any cargo to be stowed, contrary to cellular holds which are uniquely for containers.

Investment in conventional Ro/Ro tonnage, ConRo's in particular, peaked in the 1970s when the developing world was not as developed as it is today. Congestion in poorly equipped ports then was the order or the day. Roll-on roll-off ships can load and discharge quickly, taking up a minimum of quay space. The ships usually carry their own forklift-trucks, tugmasters, trailers and so on to handle the cargo, including containers, on board and ashore. It made the Ro/Ro the ideal congestion beating transport system.

Only 13 smaller ships built during the 1970s still exist. The present conventional Deepsea Ro/Ro vessel fleet consists of an estimated 210 units. Although exactly 100 of these were built since 2000, the average age of these 210 Ro/Ro's is 18 years. In additional to a few non-operating owners, it is a limited number of vessel operators having invested in Ro/Ro's for deepsea employment. In alphabetical order, they include Bahri, Grimaldi including ACL, Kyowa Shipping, Messina, Nordana (no longer active), NYK Bulk & Projects and Wallenius Wilhelmsen (Mark IV and V units).

While Japan's exports of passenger cars gained substance in the 1950s, the first pure car carrier (PCC) was launched some 20 years later. Before then, factory-new cars were mainly loaded and discharged in the Lo/Lo-mode and transported in bulk carriers provided with hoistable decks in some of their holds.

The pure car and truck carrier (PCTC) emerged in the second half of the 1970s. It distinguishes from the PCC by having a heavier ramp and one or more reinforced and higher decks to accommodate higher and heavier vehicles and machinery.

The large car and truck carrier (LCTC) is a vehicle carrier with a minimum capacity for 7,000 CEU (car equivalent units). The largest among them are PostPreviousPanamax (PPP), in other words these are too big to pass through the original (old) Panama locks. As of June last, 47 PPP large car and truck carriers were operating with another 45 on order. Hoegh Autoliners operates the largest of them all: six 8,500 CEU units.

The question is, as with 22,000 TEU container ships, whether given recent market dynamics such huge vessels are not a bridge too far. While global production of motor vehicles continues to grow, by 4.6 percent in 2016, the number of cars carried declines: some four percent last year. The key driver of this is the expansion of car production closer to demand. This development, which started after crisis year 2009, has now led to a disconnect between expanding global car sales and seaborne trade volumes.

Car carrier operators started lifting non-car cargoes on the way back to their car loading areas in North East Asia. As such cargoes could reach a proportion of 30 to 40 percent of the roundtrip liftings, it induced the development of the pure car and truck carrier.

The manufacture or assembly of cars has meanwhile become much more diverse, nowadays taking place in more than 50 countries worldwide. This has greatly increased the number of destinations to which additionally breakbulk cargoes, including projects and heavy-lifts, are made. The ships of the Top 15 Vehicle Carrier operators in Dynamar's report are calling at 340 ports in 150 countries worldwide.

Conventional deepsea Ro/Ro ships and vehicle carriers have two things in common: a shrinking fleet, and a ramp.

For the first time since 2010, the number of vehicle carriers reduced by 12 units in the 18 months between January 2016 and June 2017. In the same period, i.e. from the first month of 2010 onwards, the conventional Ro/Ro deepsea and shortsea fleet fell by no less than 170 ships.

Conventional Ro/Ro Vessels and Vehicle Carriers have in common that neither would be what they are without a ramp. However, as the table shows, the two segments are going through an opposite development: while the one is contracting, the other is in the expansion mode.

As of June 2017, the five largest deepsea conventional Ro/Ro operators (including sisters and subsidiaries) combined deployed a fleet of 76 Ro/Ro ships with total 2.37 million dwt. Their fleet then constituted 36 percent of the World (deepsea) Conventional Ro/Ro fleet. 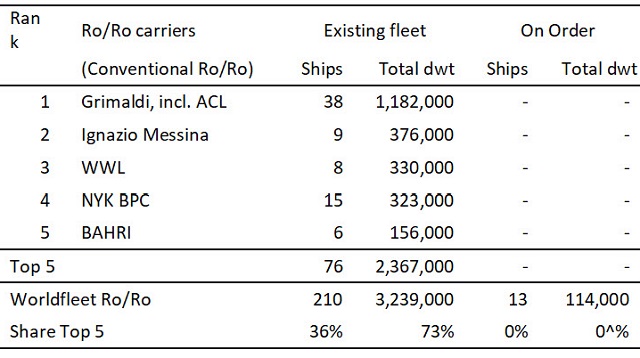 As of 1 June 2017, world’s five largest vehicle carrier operators (including sisters and subsidiaries) combined deployed a fleet of 501 PCC, PCTC and LCTC units, with a total carrying capacity of 2,827,000 CEU. Their fleet then constituted a CEU share of 72 percent of the World Vehicle Carrier fleet. 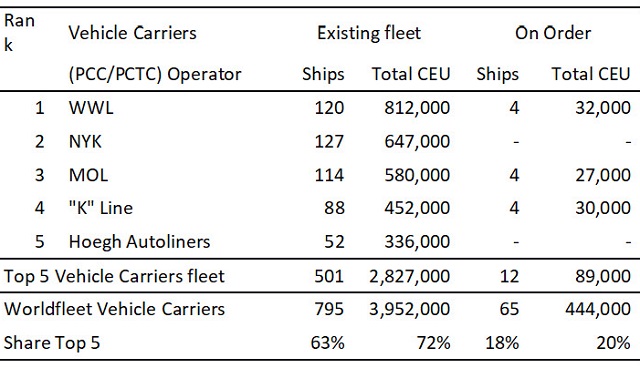 On Friday, the maritime welfare charity Seafarers UK called for better reporting on the rate of suicide at sea. According to the charity, the many recent reports of deaths involving seafarers stranded by the coronavirus shutdown demonstrate the longstanding shortage of reliable information about suicide on board. With most crew changes halted due to coronavirus restrictions, thousands of seafarers are compelled to work beyond their contract end dates and have been denied access to seaports around the world. As a...