The pirates were attempting to hijack an unidentified ship near the Gulf of Aden on Saturday. Another pirate was injured during the incident.

Ahmed Abdullahi, an official with the anti-piracy force in the Puntland region, said the men were from a group of nine pirates. The others escaped.

The naval force involved was not named.

The report coincides with that from Chinese news agency Xinhua saying that a convoy sent by the Chinese People's Liberation Army Navy (PLAN) rescued a Panamanian tanker that was being attacked by pirates in the Gulf of Aden on Saturday.

The PLAN received a report around 9:30 p.m. Saturday Beijing Time saying that the ship Alheera was under attack by five pirates and was requesting help.

The frigate Hengyang dispatched its shipboard helicopter to the area and had driven the pirates away an hour later.

Incidents of Somali piracy have increased in recent months. The hijack of the tanker Aris 13, on March 13, was the first reported hijack of a vessel covered by IMO regulations by Somali pirates since the tanker Smyrni in May 2012.

Oceans Beyond Piracy’s analysis indicates the the number of reported failed attacks and suspicious incidents rose in 2016. Armed security teams deterred 11 attacks in 2016. 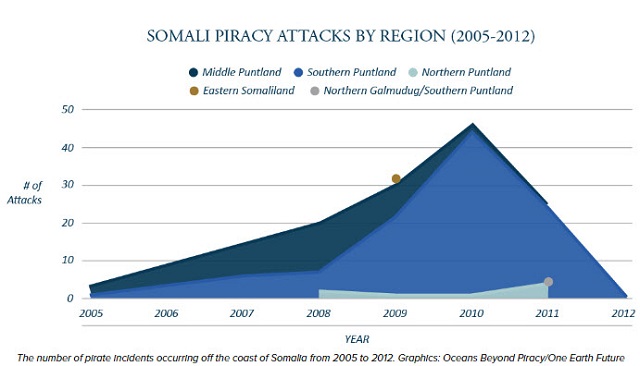 The organization says that the situation in Somalia that originally permitted piracy to flourish has not changed. This has left the door open for other forms of maritime crime, such as smuggling and trafficking.

Since the year 2000, almost 5,000 seafarers were taken hostage by Somali pirates. At the height of Somali piracy in 2010, there were over 1,000 seafarers being held hostage at the same time in Somalia.